Everything Wrong with Finals Week 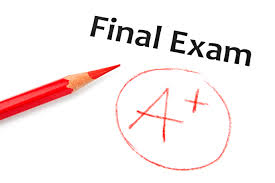 What used to be a nice transition into the summer, is now a “final push” for students. This should be changed. Holding final exams at the same time for underclassmen and seniors would make sense so that the school would only have to go through one set of exam blocks. Additionally, students can choose whether or not they come into school for the last week of festivities.

Seniors always graduate roughly a week before the underclassmen. This means that they take their final exams a week before the underclassmen do. If the seniors and underclassmen took final exams at the same time, the school could take out two birds with one stone. There would be no reason, in that case, to have two sets of exam block weeks. The schedule would have to be modified to cause the least disruption and accommodate all of the testing, but it is certainly doable.

After the entire school took its exams, the seniors would graduate, and the underclassmen students would stay in school for an extra week. This last week would be laid back for students because final exams would be complete. This schedule could also benefit teachers because they would have more time to grade exams, and put in the last grades of the year. Yes, it’s true that if this change were to occur, final exams would be one week closer to the end of AP week, but this year, for example, there was a gap of a week and a half between AP week ending and senior exams starting. If students are periodically reviewing material from the year, the argument can be made that a week and a half should be sufficient to study for final exams.

Holding final exams on the last week of school seems like a ploy to keep students in school till the very last day. It should then come as no surprise that even this tactic is not working in favor of the schools. Travel prices increase drastically as the dates near the summer. Parents aim to plan their trips around a student’s school schedule, but in most cases, the cost of travel trumps a student attending the last few days of school. For this reason, many students who travel take final exams when seniors do, so that they can leave school early. So, holding final exams on the last week essentially does nothing because those who wish to travel end up doing so anyway.

It is understood that final exams will come at the end of the year, but there is no reason for the exams to literally be on the last days of school. The argument can be made, that underclassmen teachers utilize this extra week to cover extra material or review, but can a week really make that much of a difference? How thoroughly can new content be covered in a week? How extensively can content from the entire year be reviewed in a week? By combining senior and underclassmen exam blocks, students take exams at the same time. This, in turn, leaves the last week free for students to just enjoy what’s left of the school year. Exams on the last week of school put a strain on teachers and students alike and cause stress in what should be a relaxed part of the year.