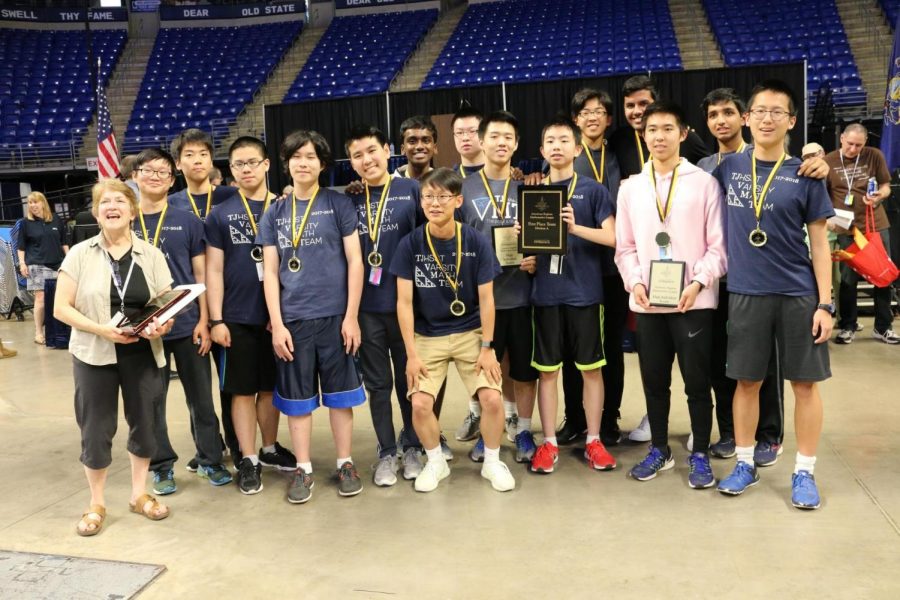 Jefferson VMT's A team pose with their medals and plaques after placing first in the nation, outperforming some of the brightest minds in the country for the gold.

Hunched over complex math problems in the bleachers of the Pegula Ice Arena, Jefferson students hastily scribbled numbers and formulas in hopes of bringing home the gold. This past Saturday, June 1, 48 students split into three teams of 15 and three alternates attended the annual American Regions Mathematics League (ARML) at Penn State.

“ARML is regarded as the largest of the competitions we go to because we spend a whole four months preparing beforehand with three-hour practices on Thursdays every week,” junior David Chen said. “It’s held at Penn State, but there are three other locations. Different people across the country go to different locations. At Penn State, we don’t see all the competitors, which shows how big this competition is.”

The countless hours of preparation that Chen and his fellow Varsity Math Team (VMT) members dedicated paid off. With the help of a truly impressive performance by Chen, the Jefferson A team won first place out of more than 120 teams from almost every state.

“Last year we had a really strong team, and we thought we had a good chance of winning [ARML] and we did,” VMT captain and senior Ryan Kim said. “[After the class of 2018 left], I would say our team wasn’t as strong, but we definitely still had the ability to get first. I was at prom when I heard that [Jefferson A won], and it was awesome. Especially after hearing about how all the individuals did well, I really wish I could’ve been there. I’m really proud of the team.”

As Kim mentioned, several Jefferson students gave an incredible individual performance at the competition. Juniors Ben Kang, Ajit Kadaveru, and Michael Huang all placed in the top individuals at ARML, correctly solving 9 out of 10 problems on the individual round and advancing to the tie-breaker round. Besides these three A team members, Chen also performed exceedingly well. When speaking of his accomplishments, Chen’s face lit up as he remembered the moment he found out he won.

“I was able to get the only perfect score in the nation, I guess,” Chen said. “This was really surprising for me. I had never done so well in a national competition before. Many people on our team expected that other people, especially from other sites across the country, would also get a perfect score. When I heard that I was the only one, I really just couldn’t believe it at first. It just felt really rewarding because this might be my last year attending ARML, and it really does feel like a culmination of four years competing there. It’s just a great feeling to end on such a high note.”

To celebrate this accomplishment and others such as A team’s win at Duke Math Meet, a party was held during eighth period on Wednesday, June 5. Ice cream and toppings were available for students and the VMT junior officers made a powerpoint to say goodbye to seniors Adam Ardeishar, Caroline Jin, and Ryan Kim.

“[VMT] has meant a lot to me,” Kim said. “I made a lot of friends through the team. It’s something that I’m definitely going to miss next year- there’s not an equivalent in college. I’ll miss the time we spent together learning and having a fun time, and especially our travel competitions.”

Ardeishar, co-captain of VMT, shared his thoughts about going away as well.

“I think [VMT] is a great outlet for doing math and finding like-minded people,” Ardeishar said. “[Being a part of VMT] has led me to all the accomplishments I’ve had in high school. Having people that enjoy math has really helped me. I’m sad to be going but I know the team is in good hands with next year’s officers, and I’ll be sure to visit next year once I want to come back from college.”