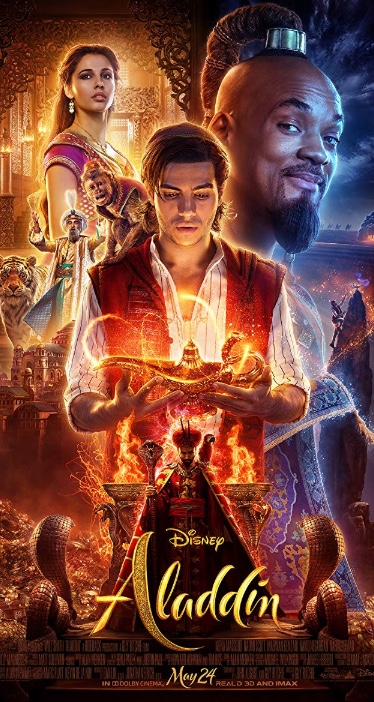 *Before we get into it, A fair warning, minor spoilers ahead.

Few movies have been able to invoke an emotional response like the live-action “Aladdin” movie was able to. Growing up, the story of “Aladdin” was one of my favourites and going into the 2019 reboot, I had a lot of expectations. I can say for certain, after seeing it, that the movie met and exceeded all of my expectations.

On screen, Aladdin and Jasmine, played by Mena Massoud and Naomi Scott, have such good chemistry. When the casting choice was first made, I laughed at the genie being portrayed by Will Smith, but after having seen it, I can’t see anyone else playing the character. Marwan Kenzari does such a good job bringing Jafar, the villain of the story, to life. In fact, I would say that Kenzari’s performance is perhaps the most impactful in the film given how intimidating he is, and how nefarious his actions are. Even minor characters, like Nasim Pedrad’s character of Dalia, Jasmine’s maid, are memorable due to the actors’ performance.

The latest “Aladdin” movie had several songs throughout its two-hour runtime. I’m happy to say that ALL of them were hits! Some of the songs were repeats from the original 1992 version, like Prince Ali, One Jump Ahead, Friend Like Me, and of course, Whole New World. The movie also sees the addition and modification of songs, though. For example, Jasmine sings a powerful song, Speechless, which is played during two different scenes. Arabian Nights, the opening theme, was also modified from the original 1992 version to be longer and more expositional. Overall, with the exception of lyrical updates, the songs stay true to the original, which was a delight for me. One complaint I do have is that the Whole New World magic carpet sequence felt so small, and with such a  popular song, I figured it would be elongated by a little at least.

Disney has done a wonderful job modernizing a real classic movie. I was doubtful, as I said, going into the movie. I either expected that the movie would do a bad job trying to emulate the 1992 version, or that it would be alright, but try to change too much. Luckily, Disney seems to have directly addressed my fears by striking the perfect balance between paying homage to the old while changing enough to keep things interested.

With that being said, the movie is predictable. Not only is the plotline quite similar to that of the 1992 version, but the movie itself is quite cliche. I won’t mention what the climax was, but I will say that I could say for sure what was going to happen and I could see it coming from a mile away.

The graphics are spectacular and visually, the movie is beyond words. All the scenes in “Agrabah” are stunning and you can tell that a lot of work went into the movie. The movie seamlessly weaved CGI with real acting to create a visual masterpiece.

Finally, the emotional quality. The chemistry between Jasmine and Aladdin seems so real. The movie had me clutching my stomach laughing in one scene, and holding back tears in the next. The ending is a happy one though, and that’s all I care about.

Overall, definitely watch this movie if you haven’t already. It was, in a word, phenomenal. I wouldn’t be surprised if it were I heard about it again during awards season.