A New Way to Explore the Universe 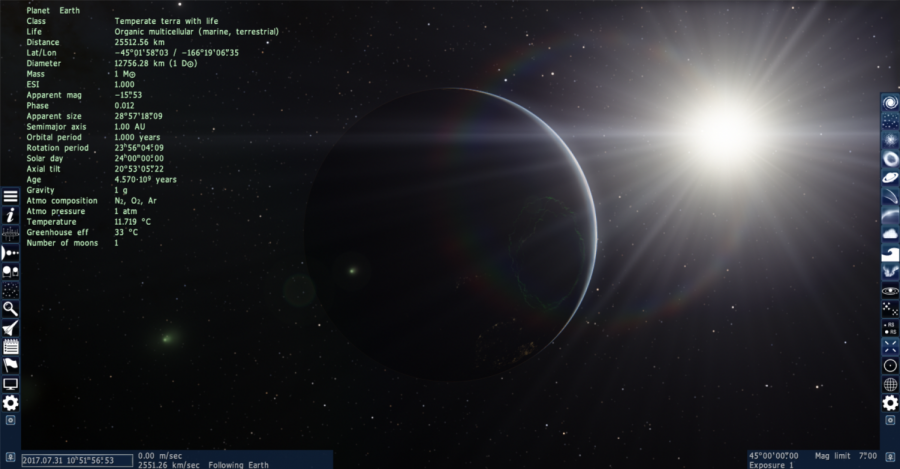 Earth and the Sun, as well as the game's GUI are shown in this SpaceEngine screenshot. SpaceEngine, although not as renowned as some games, provides an opportunity to explore the universe.

Have you ever wanted to explore distant stars? Travel to other galaxies? Land on Mars?

We haven’t invented advanced spacecraft yet, but luckily, there’s another way to visit these places: SpaceEngine. Created by Russian astronomer Vladimir Romanyuk, the game/virtual planetarium is highly accurate and detailed. It has been praised for its stunning graphics as well as its scientific accuracy.

In SpaceEngine, you can travel through space and time and visit objects as far as billions of light years away. There are options to land on planets and terraform them, fly spaceships equipped with ion thrusters and warp drive, and find extraterrestrial life.

Many of the planets, galaxies and other objects in the game are real and correct in both dimensions and distance. Others are randomly generated through a scientifically-accurate algorithm. Just by flying through the game as fast as 300 million light-years per second, you can see a mix of star types from red giant to white dwarf, colorful nebulas, black holes, galaxies and quasars. SpaceEngine also contains most exoplanets that have been found.

Be sure to use a good PC to run the game, because the graphics are detailed enough to crash lower-end computers. The game is in beta, so be wary of glitches. Finally, be sure not to fall into a black hole, and many objects have not been fully added to the game.

Overall, SpaceEngine is a great way to learn more about the universe from the confines of planet Earth. The game is currently free to download on Steam. Hopefully, however, the game will be released for virtual reality in the future.