To Kill a Nation 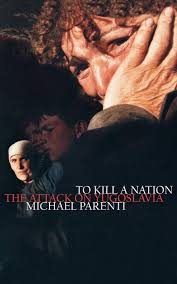 A couple weeks back, I began research for a history project, a project that at that time would supposed to be due in a week. Mind you, the assignment itself was passed out at least three months prior to the beginning of my research, along with a stern warning that the project should not be left for a week before the due date. Of course, I let my procrastination get the better of me.

The project was on the conflict in Yugoslavia in the early nineties and also required me to read a book on the topic. I knew next to nothing about what was happening in the nineties and quite literally nothing about Yugoslavia. I’m not a history geek nor a huge reader, so I guess it makes a little sense why this project was left for a week before its due date.

Today, I can confidently tell you I know much more than next to nothing about Yugoslavia in the nineties and I owe it all to Michael Parenti’s To Kill a Nation: the Attack on Yugoslavia.

To Kill a Nation: the Attack on Yugoslavia explores how international leaders and their policies played a direct role in the collapse of Yugoslavia. The book assures that political leaders are not necessarily in the wrong, but that their policies often confused for egotistical, were at times simply naive, or like leaders should, had their own nation’s best interest at heart.

The account, written by Michael Parenti is detailed in the conflicts of Slovenia, Croatia, Bosnia, Republika Srpska, and Kosovo. In his own interpretive opinion, he also touches on the supposed NATO war crimes, the Rambouillet Agreement, and the ethnic cleansing. More than anything, rather than a textbook or scholarly or popular piece, the book represents opinion often put to rest by simple waves of a hand. Parenti uses a variety of sources, but most come from newspapers from the 1990’s to 2000’s from around the world. While specific dates aren’t used extensively, in the sections covering the republics’ conflicts, specific days are often utilized due to quick turns of events. No maps or illustrations were used, but maps would have proved useful when reading about specific conflicts in the republics.

As the book was one of the first pieces I read on the topic of the collapse of Yugoslavia, specifically sections on the rising of issues in the individual republics were a great basis for research. While the absence of and maps and charts caused a little confusion initially, more often than not, certain terms were never defined. The book did require me to search certain phrases up every couple of pages, so that I was able to gain a clear understanding. Nonetheless, Parenti created a piece that offered information that no other website or database could. It was a successful attempt to help readers understand where political history across the world stood in a time of conflict in Eastern Europe.

I finished To Kill a Nation in two days (and received an A on my project), which not only tells you something about me, but about Parenti’s writing. It was like Parenti turned history into a soccer game just for me. If this no-good reader can finish this book in two days, there has to be something special about it.