The Way to the Summit 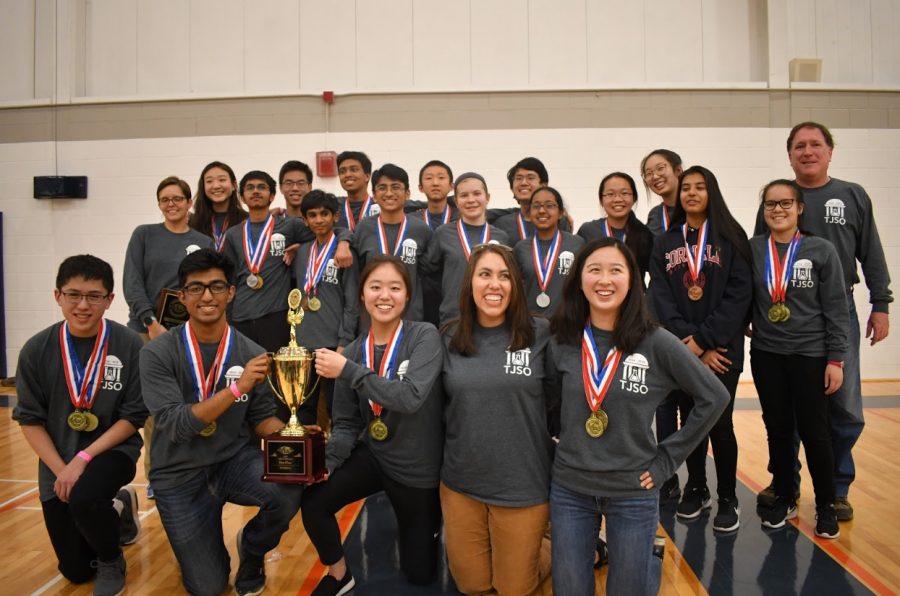 After a season of hard work, Jefferson’s Science Olympiad team prepares for the upcoming 2019 Science Olympiad National Tournament, which takes place on June 1st. As the tournament approaches, the team feels more and more pressure to make the most of their time. In the weeks of frenzy before nationals, some teammates find the stress to be detrimental to their studying, while others find it to act as an incentive.

On the other hand, junior Sydney Szabos feels motivated by the imminence of the tournament.

“I’m pretty nervous, but at the same time, we’re like, ‘it’s getting closer and closer.’ And so I’m excited for it, but also, I gotta study. Because, you know, last year we went and we did pretty well, so I feel like we need to do the same,” Szabos said. “So there’s a lot of motivation to study.”

For some members of the team, this will be their first time competing at the national tournament.

“I’m looking forward to seeing kind of the atmosphere, and what all the different teams are like across the nation. We’re all in Science Olympiad, and hopefully we’ll get to learn something from them,” sophomore Thomas Lu said.

Sophomore Aaliya Hussain looks forward to learning more about her events from the tests she will take at nationals.

“I’m most excited about just doing another test, because, well, it’s the national competition, so you’d expect some good tests,” Hussain said. “I also want to see how well I’m doing compared to everybody else in the nation.”

“I’m just gonna have a good time, because it’s my last tournament of my entire life. So, I want to make many memories,” senior and team captain Rachel Eom said. “I’m definitely looking forward to just the general environment of the ceremony, all the activities, and bonding with our teammates for the last time.”

Although having such a big tournament may cause there to be tension within the team, it is clear that the team’s morale is high, and their moments spent together means a lot to each other.

Lu echoes this sentiment, as he especially appreciates the teamwork aspect that Science Olympiad entails.

“I would say there are a few really important things for me,” Lu said. “One thing is definitely the community aspect. It’s just that every member of TJSO has their own skill set, and they’re all really amazing people. And so when you have like the combination of everybody together, it’s just really cool to see everybody in action.”

The climax of the year is made all the more important by the effort that the team has put in building up to this point. Through all the chaos of these few weeks, the team grows even closer and the mutual support between teammates is evident.

“Another thing is just feeling like you’re part of something larger than yourself. Like whatever I do, I’m doing for my team, and not just for some of my personal achievement, and that feels really good,” Lu said. “What I do goes towards the sponsors, my teammates, and the name of our school and even the name of our state. So, that’s an aspect I really care about.”

Hussain elaborates on another way that the team supports each other–regardless of how the results turn out, the peers all share a mutual understanding.

“We’ve all worked hard up to this point,” Hussain said. “By now, we all know that how well we do on a test isn’t really always reflective of how well we’re prepared for an event. There’s always bad tests, bad luck–especially in the building events.”

Despite the unpredictable nature of Science Olympiad tournaments, the TJSO team has performed especially well this year, exceeding expectations in invitational competitions and even breaking an overall team record at the state tournament. With high hopes and, for some members, their experience at the national tournament last year, the team anticipates good results.

“Since we were there last year, I feel like we’re more prepared and know what to expect more,” senior and team officer William Chen said. “I think we can improve because
a lot of the events we didn’t do as well in last year were because we just didn’t know what to expect. And now that we’ve been there for a year, we can probably do better.”

Eom took a similar standpoint with her faith in the team.

“Because it’s my second year going to nationals, I’m definitely feeling a bit more pressure, because we’ve raised our standards of doing better,” Eom said. “Considering that everyone is more involved this year than compared to last year, I think we are going to feel better with our events.”

“Everybody is amazing and whatever we do, as long as we do our best, I think everybody will be proud,” Lu said.