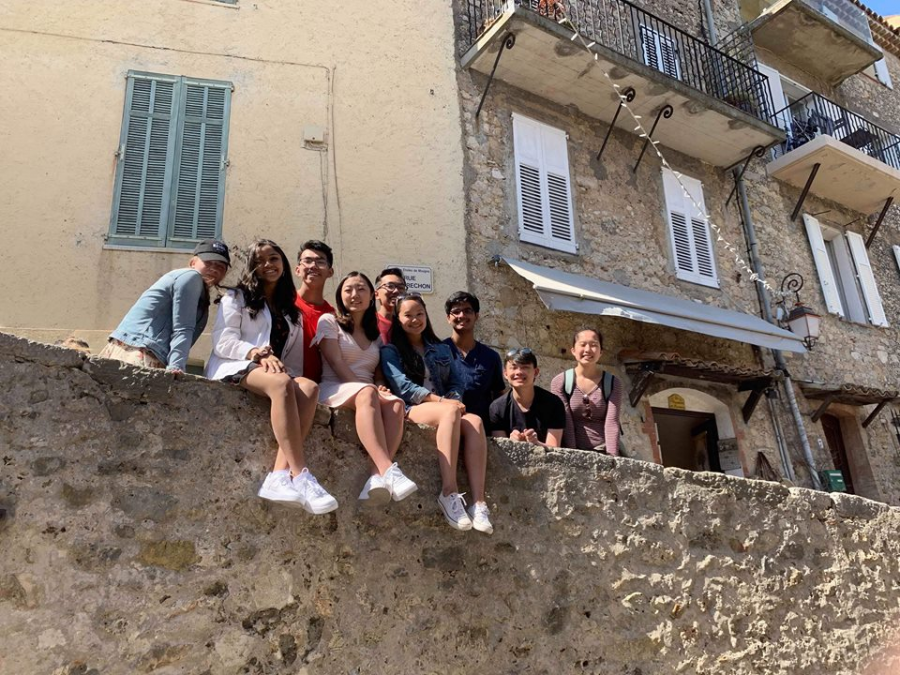 Over spring break, 15 Jefferson students enrolled in French language classes travelled to Cannes and Nice as part of a foreign exchange program. The students, who were in level 3, AP, and level 5 French stayed in the homes of French students who were part of the exchange program.

“We received [French]  students in April last year. A lot of the kids who came were the hosts [in France] this time,” French teacher Mme. Van de Kamp said. “We try to match kids with similar ages and things like that. The school [Jules Ferry] in Cannes is also a science and tech school. So these kids also have similar interests.”

The trip to France provided the Americans students the opportunity to practice speaking French in a practical setting beyond the classroom. Not only were they able to speak French with native speakers, but the students could also experience the culture alongside host families, rather than as tourists. Junior Pranav Somesula, who is currently taking AP French, felt that he benefited from learning about the cities themselves that he will encounter prior to travelling.

“All of us have a proficiency in French; we haven’t been doing special to prepare. I think we learned about the city more,” Somesula said. “I also think it’s a good opportunity for AP students to get in touch with the culture before the exam in May. “

Once in France, the students stayed with their host families and experienced their customs and food. In fact, while typical American home meals consist of only 1-3 courses, French households have more elaborate meals.

“Somebody came to class and I said ‘What did you observe in terms of culture?’ And she said, ‘Well, they eat a lot! They have a very regimented lunch and dinner time the family eats together,’” Mme. Van de Kamp said. “She said they start with the main course then they eat salad, then they eat dessert, then they forgot to eat something and go back and eat something else.”

Along with contrasting in dining traditions, Somesula observed differences in the architecture of French towns and homes.

“The south of France is pretty old,” Somesula said. “We visited old villages, which have been around since ancient times. The houses are really close together and the roads are really tiny. There are architectural differences in the homes. The toilets are in a separate room from the bathroom!”

The students spent a few days doing activities together in the cities. For example, they embarked on a scavenger hunt throughout the city of Nice.

“We did a little scavenger hunt in historical center of nice. We hired a company to do that. The lady she is dressed as a pirate, because that’s a region with a lot of pirates in the past,” Mme. Van de Kamp said. “Three of our teams beat the record that they had, they were the fastest time to figure out all the clues ever. Traditionally, it takes between an hour and three hours for people to figure out all the clues and everything. And [our] teams were there in 44 minutes!”

Since France is known for its perfume industry, the students also tested their hand at creating some of their own scents at the historic Fragonard perfume factory.

“One thing we did was really interesting was for chemistry lovers. We went to a factory that produces perfume, and they taught us how to make perfume, what you need to put in there,” Mme. Van de Kamp said.

The choice of making Cannes and Nice the points of interest for the trip was made very carefully by the teachers.

“I’m not going to Paris; it’s a huge city there are things going on there so we feel more protected in the south. It’s a small region – the cities are small so you feel a little safer,” Van de Kamp said. “There’s lots of ancient villages with medieval castles, so it’s very pretty.”

When it came to the value of exchange programs, they offered students an experience to learn about a region in a way incomparable to that of a tourist.

“The good news was that the kids had fun,” Mme. Van de Kamp said. “I think the families did a fabulous job in showing them the region and traveling around with them. This family exchange thing is really cool. It’s completely different from being in a hotel and doing sightseeing.”