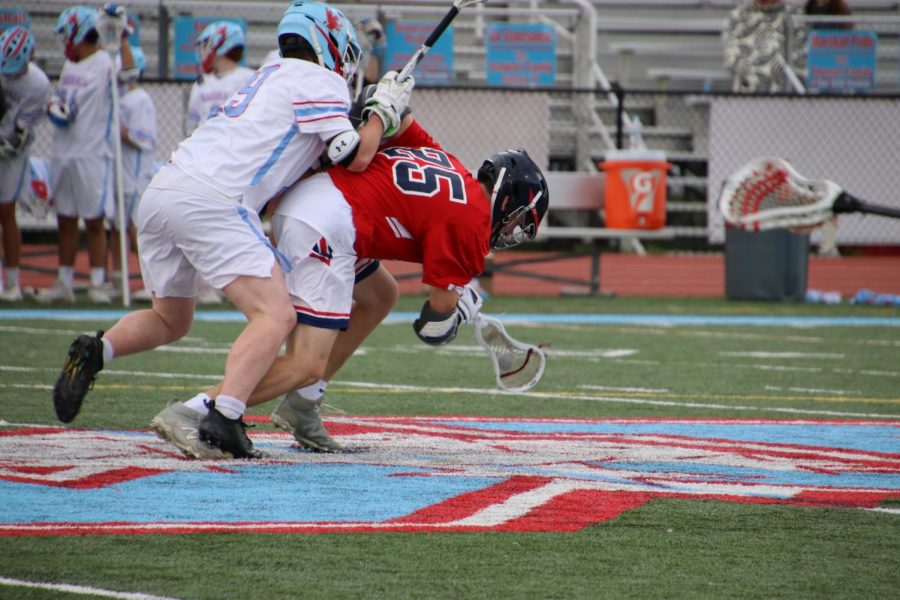 Bending over to dodge an opponent, midfielder Caden Philips battles to maintain possession. The team's efforts ultimately weren't enough as they lost 11-7.

The Jefferson Boys Lacrosse Team lost to the Marshall Statesman 11-7 in the District Finals on Tuesday, May 14.

The Colonials jumped out to a 2-1 lead in the first quarter behind two goals from midfielder Justin Kim (10) but ended the first half down 7-5. Jefferson scored first in the second half to keep the game close, but the Statesman eventually ran away with the game in the fourth quarter to win the district championship over the Colonials.

“They were a really good team, and we put up a fight, and we held the game close for a long time, then they just pulled away in the fourth quarter,” goalie James Lowe (15) said.

Jefferson pulled off an up-and-down overtime victory over Edison to advance to the finals. Coming in, they were confident in their ability to win the championship even though they were a seed lower than Marshall.

“Because we were the number two seed, we played Marshall once, and two of our best players (Justin Kim and Wyatt Marvil) were out that game. And we only lost that game by two goals,” defender Matthew Cohn (8) said prior to the matchup. “So I really don’t think we’re a an underdog at all. Because then our defense was able to shut down their offense. It was just our offense needing to get a little more work and better passing and better shooting, which I think we’ve grown tremendously. And I think it’s going to be a really good, really close game.”

However, amongst the problems for the Colonials contributing to their loss was a lack of teamwork.

“I think that one of the big things that led us to win in the semifinals was that we played cohesively as a team. I think that in the finals, we lost a little bit of that, and a lot of players seemed like they were playing for themselves instead of the team,” attacker David Mead (12) said. “And so, the team chemistry definitely was less than before. I think that was one of the key factors. And then overall, just like once we got down in the third quarter, we lost a little bit of our hustle.”

Mead attributes the team’s missing chemistry in the finals to the pressure to win.

“For some of the seniors, I thought that because this was like the last chance to win a championship. And the passion to beat Marshall, they felt a lot of pressure to do that, and so they felt that they kind of need to put it in their own hands because they’re good players, and they know they’re good players, and so they thought that, you know, if they put the team on their back, they could win it,” Mead said. “But it turns out that we needed to continue playing as a team. So I think that the pressure to win resulted in some people having skewed ideas of how we can win the game.”

Despite the loss, the Colonials will walk away knowing that they have the potential to win the district championship.

“We definitely knew that if we played better, we could have won — it wasn’t a difference of like team abilities. So with that in mind, seeing the disappointing loss, but seeing how we’ve grown for the past three years under the new coach, Coach Hensley, we definitely know that the ceiling is higher, and we know that we can beat teams like Marshall,” Mead said.

Lowe builds on this idea, adding that the loss will motivate them for the next season.

“Now it’s more realistic of an idea to think of us winning conference championships, whereas in the past, that was more of a bigger stretch. So now I think it will make our goals seem a lot more attainable,” Lowe said.