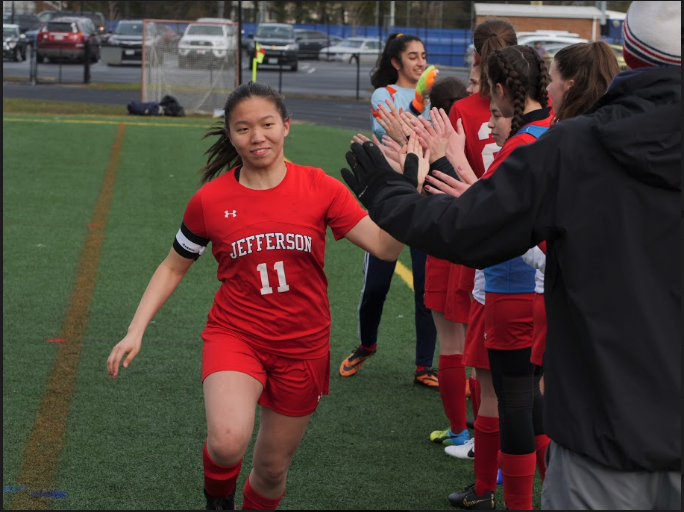 Player Sherrie Feng high-fives the team as she gets ready to take the field before the game. Khushie Matharoo, typically goalie, stands in the front of the line.

The soccer season has two types of games. Conference games that determine post-season play, as well as non-conference games that teams play for fun. While Jefferson is known for lower-than-average sports performances, Jefferson athletes are enthusiastic about their team and continue to persevere with interest in their sport. But under a no pressure situation, what’s to stop athletes from mixing it up?

Kazmi details how for this non-conference game where the team knew they were going to lose, members played whatever position they wanted for fun. Offense switched to defense and players got to try something out of their specialty.

For example, Matharoo, who typically plays goalie, switched and played striker for the game, the largely offensive position primarily responsible for scoring goals.

“It’s been so long since I stepped on the field,” Matharoo said.

The score at the end of the game was 7-0, but Jefferson celebrated a tiny victory by not allowing Yorktown to mercy-rule the game, where if the score margin is eight or above before the second of the game, the losing team would have to forfeit.

“They were trying to make us give up, and we didn’t let them do it, which was good on us,” Matharoo said.

In addition, like many other sports, soccer features a close-knit group of friends.

“I really like the people, it’s a good vibe. It’s fun to play together, with team members who are really experienced and some who’re not as experienced,” Matharoo said. Matharoo joined Jefferson’s team in freshman year after playing recreational soccer in middle school and has been playing as a returning member every year.

“I hope that we become a better-bonded team so that we can get out there and play and actually win,” Matharoo said in regards to next year’s season.