Looking back at the robot project 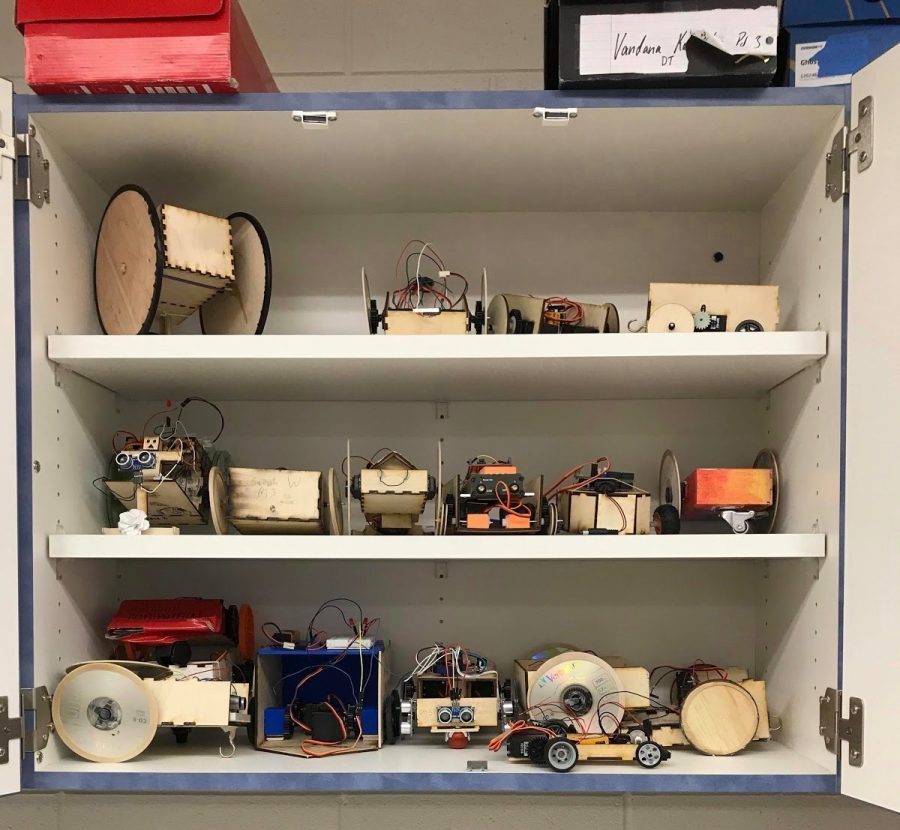 A shelf displays some of the robots built during the past two months. The annual robot project requires freshman to build a fully functioning robot and compete in a rigorous competition.

Every year, freshmen tackle one of the most notorious projects of the year: the robot project. As a part of the TJ Design and Technology curriculum, the robot project is a chance for students to display the skills they have learned in tech thus far. Although most students end with a working robot, the path leading to a finished product can be a tough journey.

The multitude of components and functions each robot must exhibit can spur frustration and numerous complaints among students. Even students who had won the schoolwide competition didn’t hesitate in listing various aspects of the project that they found challenging.

“I think the challenging part is that you have to do a lot of the things yourself like by researching instead of being told how to do something,” freshman competitor and winner of the speed competition Akshan Sameullah said. “You have to actually find the sources by yourself.”

In hindsight, many students wished they had done something different from their original attempt at creating the robot, especially after having to experience the project firsthand.

“I wish I had started the building process earlier,” freshman winner of the beauty competition Isra Satiar said. “I planned for about three to four weeks, but when I actually started building, I realized the holes in my plan.”

Based on these challenges, students also had several suggestions as to changes that could be made to the project in order to make the experience more enjoyable for everyone. One noticeable challenge was the lack of collaboration allowed during the project, which many considered to be a hindrance.

“Incorporating more collaboration into this project would’ve made it a lot more memorable,” Satiar said. “If it was team-based, students could learn more from their peers in the time given.”

Some students also thought the constraints that were placed upon the project were too strict and even unfair. Many felt that starting the project at an earlier date and removing the money constraint would have provided an advantage.

“The time constraint and the money constraint, if they had given us more time I feel like it would be a lot easier,” freshman Luke Moyar said. “Why would they need to cap the amount of money we spend, since it just limits our creativity.”

Allowing students to use what they had learned thus far to create a functioning design given limited supplies may have been difficult, but many would agree that the experience provides some valuable real-life lessons.

“I like the factor where you build to learn,” freshman competitor Sameullah said. “I think that’s a very important skill to have.”