Class of 2022’s Freshman Lock-in is the Last One 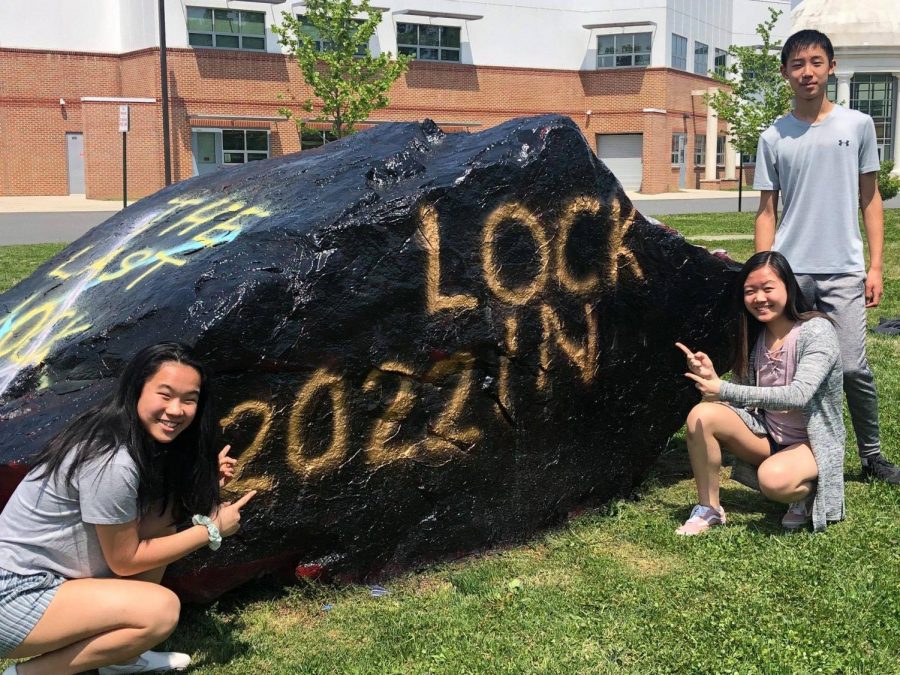 2022 class council members Caroline Chen (far left), Melissa Wu, and Leon Jia stand beside the rock outside Jefferson after they painted it for the lock-in. Even though there will no longer be a freshman lock-in, they're hopeful that a similar event will replace it. "I feel like [admin will] be able to find ways to make up for [lock-in], like make a new event or host something else," Chen said.

The annual freshman lock-in will no longer occur for future freshman classes at Jefferson.

Though the lock-in has been one of the most looked-forward to events of the year for freshmen, it is now coming to an end as FCPS indicated in an email to Jefferson principal Ann Bonitatibus that they would be further enforcing FCPS policy R8420, which specifically states that no one using school facilities for any reason is permitted to stay overnight, regardless of the circumstances.

“I think [the Class of 2023] is gonna miss out on the freshman tradition because [lock-in] has happened every year, and I think it’s really good class bonding time,” Class of 2022 vice president Caroline Chen said.

The email implied that ever since the tradition of lock-in began, FCPS has not enforced this policy such that the lock-in and similar events were prohibited. However, FCPS leaders have said that they are now enforcing the policy in full.

“We found out about it like halfway through and so that’s why we painted the rocket with ‘the last lock-in’,” Chen said.

Not only has this new level of enforcement put an end to the freshman lock-in, but it will also bring an end to HackTJ, which is an overnight event in which students create a computer program in the hopes to win an award.

“Right now with the information that we’ve received, saying that there are no overnight activities, and if it’s going to be fully enforced, then that would mean that those activities don’t take place,” principal Ann Bonitatibus said.

Despite all other overnight events being officially prohibited, the annual all-night graduation party is allowed and will continue to be allowed in coming years.

“I believe that that’s most likely a tribute to that tradition,” Bonitatibus said. “So that way, our graduating seniors are able to still have one last night together and enjoy themselves. For that reason, it sounds like FCPS has made an exception for that one group, but I’m not aware of any other exceptions that they’re making at this time.”

The Jefferson administration has asked for an explanation from FCPS leaders as to why this enforcement hasn’t been present beforehand, but haven’t heard back yet.

“Again, I’ve reached back out just for absolute clarification that that intent applies to the kinds of things that we do here,” Bonitatibus said. “That’s the information we received and unfortunately, I can’t speculate any further than that.”