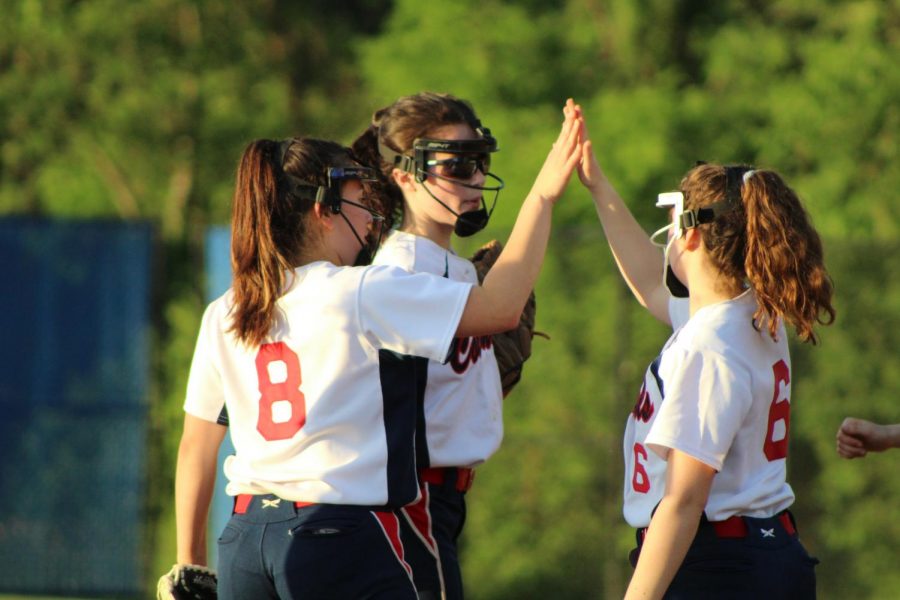 After preventing the runners on third and second from scoring additional runs on a sacrifice bunt attempt in the top of the third inning, sophomore Alexandra Friedman (right), senior Grace Stewart (middle), and freshman Michelle Boisvert (left) celebrate with a high-five before returning to their respective positions.

On Monday, May 6, Jefferson’s varsity softball team held their penultimate game of the regular season against the Wakefield Warriors. Although the game resulted in a 4-12 loss for Jefferson, the Colonials held strong and fought hard to narrow Wakefield’s lead throughout the game.

Jefferson started the game on defense with sophomore Alexandra Friedman pitching first. The top of the first inning was fast paced and tense with the leadoff hitter popping out on a full count. Moments later, the Warriors hit a string of singles and doubles allowing the runners on second and third to score. Jefferson ended the top of the first inning trailing by two runs.

At the bottom of the first inning, with Jefferson on offense, senior Ally Nakamura was first up to bat. Within a few plays, the bases were loaded with only one out for the Colonials. Boisvert hit a single allowing Nakamura and senior Neha Damaraju to score, tying the game. Later in the inning, freshman Libby McClough hit a double deep down centerfield putting Jefferson in the lead with a score of 4 -2.

Friedman continued to pitch throughout the top of the second inning, quickly striking Wakefield out, but not before the Warriors were able to score two more runs. The Colonials started the bottom of the second down 4 – 6. Though the Colonials were desperate to regain the lead, the Warriors stopped Jefferson in their tracks as junior Julia Drennan grounded out and Nakamura popped out bringing the inning to an end.

The third inning was uneventful with neither team scoring any runs. The top of the inning started with Wakefield bunting the ball, but Jefferson’s defense made quick work of the situation tagging the opponent out before they could reach first base.

The top of the fourth saw some action with both Damaraju and Drennan making difficult catches in the outfield and stopping the advance of the Warriors. In the bottom of the fourth, with two outs and a full count, sophomore Emma Barnes walks to first but on the very next play, Jefferson is caught out ending the inning.

Though Wakefield scored three runs in the top of the fifth inning, Nakamura redeemed the Colonials by making two diving catches in centerfield to shut out the inning. The bottom of the fifth inning was marked with excitement as Nakamura, Damaraju, and senior Grace Stewart occupied all three bases. Tense moments ensued when Nakamura attempted to steal home. Ultimately though, a strikeout ended the inning preventing Jefferson from scoring additional runs.

After striking out Wakefield’s first two batters, Friedman looked to end the top of the sixth inning, but quickly gave up another run putting the Warriors up 10-4. In the top of the seventh inning, the Warriors scored two more runs after Jefferson’s defense allowed a series of doubles, which enabled the runners on first and third to score. With the Colonials now down 4-12, it became apparent among fans and players that Jefferson was not going to regain the lead, and the game quickly ended after senior Mehran Sajjad and junior Grace Weisman-Fleischer struck out.

Though Jefferson trailed behind the Warriors for the majority of the game, the Colonials embraced a positive mentality and fought hard to try and turn the tides.

“Regardless of whether [we’re] winning or losing during the game, as our coach always tells us, [we] play like it’s 0-0 or like it’s the very beginning of the game,” Drennan said. “I try to keep that mentality and [that we] can always win.”

Following Jefferson’s loss on Monday to Wakefield, the varsity softball team rematched the Warriors the next day but lost 0-10 and ended their season with a record of three wins and 12 losses. With the National District Quarterfinals just days away, head coach Jillian Domenech noted the improvements that needed to be made.

“Whenever you’re getting ready to compete at an elimination level, every team should be preparing for every outcome in general,” Domenech said. “For every play, we just have to mentally get focused to play an elimination game at a competitive level.”