A different kind of murder mystery

Four Dead Queens is a chilling, mind-bending blend of fantasy and mystery with a fantastic backstory, detailed setting, and intriguing characters. 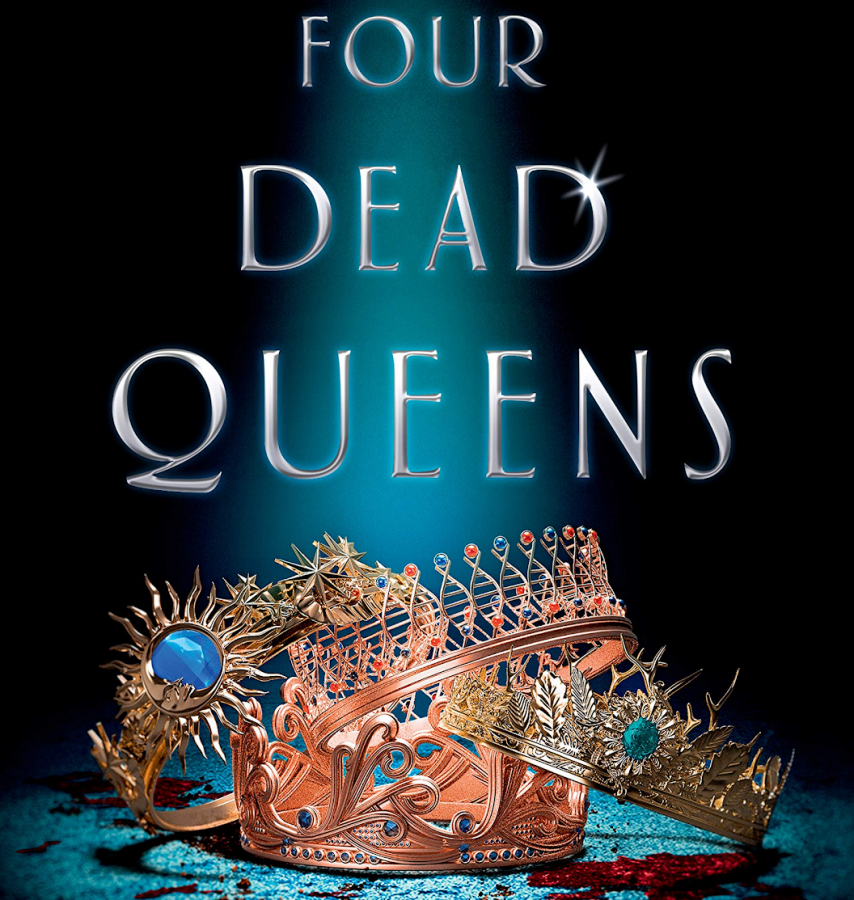 Pictured above is the haunting cover of Four Dead Queens, the debut novel of author Astrid Scholte. Although the reader immediately starts off knowing that the novel is about the deaths of four queens, it’s almost impossible to predict who the murderer is. I had countless theories throughout the whole book, but the ending left me stunned.

Picture four queens sitting regally on their thrones. Then picture them dead. One queen has a knife sticking out of her neck, blood pooling around her. Another is pushed into a pool, her mouth open in shock as she hits the water and sinks to the bottom. The third bangs on a glass window, flames devouring her body. And the last one thrashes and gasps as poison snakes its way into her blood.

Four Dead Queens is a new, refreshing murder mystery set in the kingdom of Quadara, which is divided into four quadrants by enormous walls. Each quadrant is characterized by certain qualities: Archia values simplicity and agriculture, Eonia values technology and evolution, Toria values commerce and curiosity, and Ludia values frivolity and entertainment.

In the center of Quadara, there is an ornate palace where the four queens live together. Queen Iris rules Archia, Queen Corra rules Eonia, Queen Marguerite rules Toria, and Queen Stessa rules Ludia. Four Dead Queens follows Keralie Corrington, a thief, who partners with Varin, a messenger, to find the person responsible for the deaths of the four queens.

One of the most interesting aspects of Four Dead Queens was the backstory behind Quadara’s government. The concept of having four queens occurred hundreds of years ago when the weak king of Quadara died, leaving behind four angry wives, one from each quadrant, who decided Quadara would be better off with four queens representing each quadrant instead of a king. They developed the 13 Queenly Laws, dictating how future queens should live. In present day, the laws seem harsh and ridiculous, but the future queens don’t change anything for fear that a war will break out between the quadrants.

The policy of how an heir should be raised was also very fascinating. When a queen had a daughter, the father was simply a donor and would not be involved in her life in any way. The child would be sent to the quadrant her mother ruled, and would live with adoptive parents with no contact with her mother or the palace. But when her birth mother passed away, she would be brought to the palace to become the next queen of that quadrant.

I thought it was sad how the daughter would never even get to know her own mother, and this seemed like a good Queenly Law to get rid of throughout the book.

While the various points of view might be confusing to some readers, I thought it was an effective way of telling the story because it helped me understand each character’s history and personality. While I definitely liked some characters less than others, such as Queen Stessa, I could see that all the four queens really wanted was happiness for themselves and their quadrants.

Personally, my favorite character was Queen Corra, and her death hit me the hardest, though Iris’ was the most violent. Although she was the Eonist queen and therefore not supposed to show any emotion, looking at the world from her point of view showed how she could feel, think, and hurt just like any other human. In reality, you can’t suppress your emotions all the time, and Corra was the perfect example of that.

I also liked how each queen had her own secret and how they were uncovered slowly throughout the book. The earliest secret to be revealed was Queen Corra and Queen Iris’ secret romance, which I loved. It was perfectly believable because the four queens saw each other every day and lived like a family, and there was always a chance that two of them would fall in love. I only wish there had been more scenes about their love. If Queen Iris hadn’t died so early, I would’ve loved to see more interaction between just the two of them.

Although a lot of the book was about the queens, Keralie also played an important role. Before she met Varin, she had been spiraling downward into darkness. After accidentally hurting her father while doing something for her own gain, Keralie believed that she had lost too much of her humanity to be the same girl she once was. But slowly, she learned that she could repair the damage she had done and piece her life back together.

Her character development was noticeable by the end of the book but she didn’t just change into a completely different person in an unrealistic way. Instead, she let herself develop trust for Varin and found a way to make amends with her parents. Keralie was still the same girl but with a more positive outlook on life. And she was ready to take responsibility for her actions and do something productive with her life.

Whether you’re a fan of murder mysteries, fantasy, action, or romance, Four Dead Queens will draw you in and capture your attention until the very last page. With so many incredible twists and turns, Astrid Scholte has managed to craft an incredible story. Her writing style is engaging and the dialogue is witty. In addition, her setting is incredibly detailed and you can easily picture Quadara’s sights in your mind. But the ending was what shocked me the most, and if you read Four Dead Queens, you will be in for a real thrill.