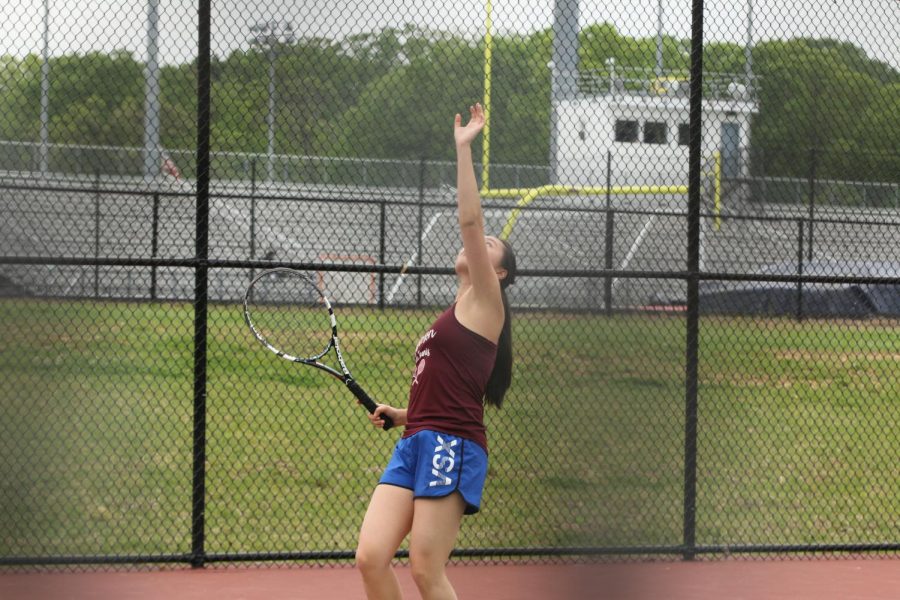 Senior Joyce Liu prepares to serve to her opponent.

Jefferson remains undefeated after this win and the victory at their Senior Night against Lee, making them district champions.

Focusing on the #1 seeded match, senior Joyce Liu, the top ranked singles player on the team, took down Justice opponent Catarina Solinas 10-3. Though the score seems far from that of a tough game, the game itself was a close match of skill between the two.

“Someone could look at a score like 10-3 and assume that it was a relatively easy match, but in reality, we had a good amount of close games and some really good points,” Liu said.

Solinas and Liu were evenly matched in terms of skill. Because of this, many of their points turned into long rallies, making the match test more of the players’ strategy.

“I think I did a good job hitting a variety of balls,” Liu said. “[Solinas] was also good, [she] moved me around the court.”

Early aces by Liu enabled her to take the lead that eventually contributed to her win. Solinas spent the first couple of games warming up and adapting to her opponent’s playing style, but by the time she figured out the other’s strategies, Liu’s lead was already set.

After that, the games became close, the lead often going back and forth as the score jumped from 15-0 to 30-30. Powerful strokes from both sides kept the games interesting, but in the end, the close points went to Liu and she pulled ahead with the lead and the victory.

As a senior, Liu will graduate this year and move on to college at the University of Chicago, where she most likely will not continue school-based athletics. She ends the regular season with straight personal victories.