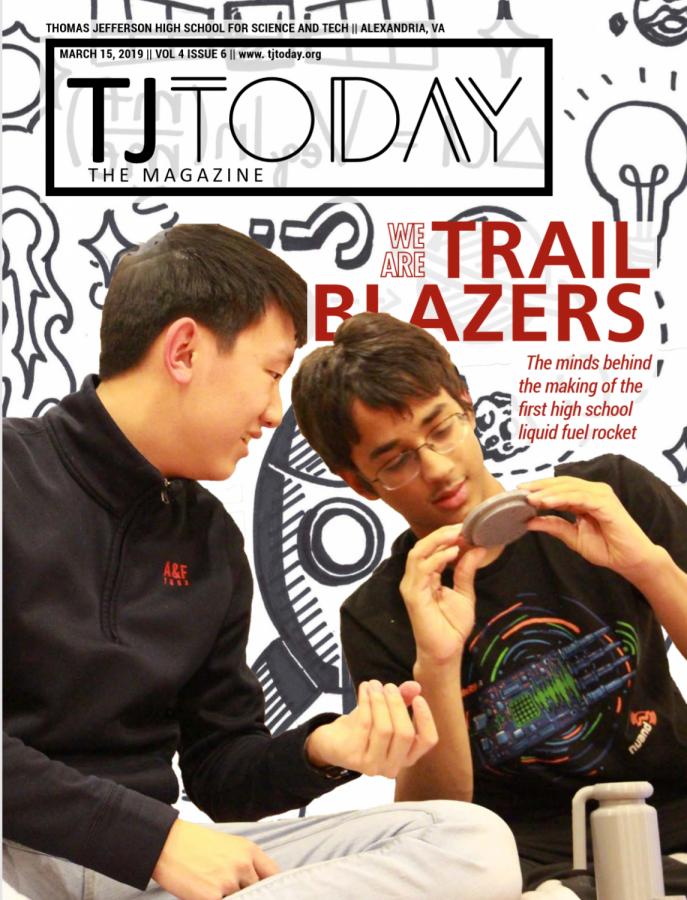 It began in seventh grade. With a movie.After watching ‘October Sky’, a film about a boy inspired to build rockets by seeing Sputnik 1 streak across the sky, 12-year-old Jason Chen knew he wanted to pursue aerospace engineering.

Following that ambition to Jefferson, Chen, a sophomore, has grown that initial spark into Project Caelus, a 16-member initiative to do what no high school students have before: launch a liquid-fueled rocket to the edge of space. Their goal is for Callisto to reach the Karman Line, the space-Earth boundary 100 kilometers above sea level.

“One day I just thought, ‘Wouldn’t it be great if [Jefferson] had [its] own amateur rocketry team where we could build our own engines and have more control over them?’” Chen said. “I pulled some of my closest friends, [and] I was like, ‘We can come together and make this really cool project.’”
The Team
Such an undertaking call for a team of committed students encompassing diverse skill sets. With this in mind, Chen recruited several fellow sophomores to serve alongside him as leads on the project.
“Jason approached me a week before Thanksgiving, and he [was] like, ‘I know you’re good with electronics. I want you to help design the electronics for our rocket,’’’ sophomore Ankit Khandelwal said.
Khandelwal joined as the Electronics Lead for the project, rounding out the five-member leadership team. The leads then held auditions consisting of an initial application and an interview to staff their teams.

“I saw that Jason posted on Facebook about Project Caelus [saying], ‘If you want to apply, fill out this form,’” sophomore Sophia Troshynski said. “It seemed intriguing, because it’s something new. This is my first experience with aerospace engineering.”

During the application process, the leadership team made a concerted effort to attract freshmen.
“We’re probably not going to finish what we want to do by the end of our time at [Jefferson],” Chen said. “We wanted some inheritance. We got [freshmen] to join, and we spent the first four months training them up.”

That training bolstered freshman Anna Catalano’s confidence that she could contribute to the project.

“I was behind all the other[s], because I’m the only freshman programmer. Also I didn’t know much about aerospace in general,” Catalano said. “But during the first meeting, Jason walked us through how everything was going to work. I felt like I could work hard to catch up and understand everything just as much as the sophomores or leads.”
The Process
Composed entirely of freshmen and sophomores, the team has not yet had the opportunity to take advanced courses that could aid in their project. As a result, their information comes almost exclusively from resources outside of school.

“Google is your best friend in any sort of engineering challenge. The majority of our research and design came from Google,” Khandelwal said. “We [also] have reached out to rocketry programs at Stanford, Georgia Tech, USC and Purdue, and we have connections there.”

“Mainly our help comes from emails and calls to other colleges,” Chen said. “We had a two hour call with Stanford one day, and that was really helpful because they walked us through the procedures that they did to make their project work. It was really good for us.”

To coordinate these and other planning, learning, coding and building efforts, the team holds a meeting from 4 p.m. to 8 p.m. every Saturday.

“If you have a passion for learning, you find time,” Khandelwal said. “If you have a goal, if you’re motivated to do something, you will put everything aside and go for it.”

As it stands right now, that goal is to reach the Karman Line by June 2021, when the sophomore class will graduate. There is still a ways to go before Callisto is ready to launch, but approaching the project with a collaborative spirit in mind boosts individual and overall productivity.

“If I have questions, I ask one of the leads or my partner, and then it helps me understand it better. Whereas when I work alone, it’s hard to understand [by] just reading a bunch of texts,” Catalano said. “I’ve never been in a club where everyone was so passionate about what they’re doing [and] so interested in our goal. It’s really cool to see everyone engaging [and] contributing ideas.”

The group’s current efforts are geared toward conducting a static engine test, the project’s first main milestone, by the end of the summer.

“It’s a controlled way to test our rocket,” Khandelwal said. “Basically, you put the engine on a test stand, bolt it down, ignite it, and let the flame come out horizontally. Through that, we can see if there are any problems on the ground instead of having to wait until we’re in the air.”
The Funding
This static engine test could be the key to unlocking much-needed corporate funding for Project Caelus.
“Just getting enough money to get started was the hardest,” Chen said. “We had a period where Akash and Ayush particularly were like, ‘Jason, we’ve been spending this many man-hours on this project, but we still have no money. How is this going to happen?’”

The group cannot directly fundraise at Jefferson since they are not an official club, but obtaining funds has become easier now that Project Caelus has been designated as a nonprofit and can open a bank account.

That $500 was donated by German aerospace company Valispace, currently the group’s only rocketry corporate sponsor. To further raise money, as well as kindle interest in aerospace engineering, Troshynski came up with the idea to host STEM nights at elementary and middle schools. But given the steep projected budget, corporate funding may still be required, and a successful static engine test would be crucial to getting aerospace companies to buy in.

“We started out by looking for sponsors, but we realized that we need to get credibility,” Khandelwal said. “Once we get our static engine test up, we hope to get further sponsorships by showing the companies: ‘We were able to do a static engine test with minimal resources. Now look what we can do if you give us your money, tools, and software.’”
The Impact
Scientifically, Project Caelus aims to take rocketry to new heights.

“The end goal of this project was [to] be the first high school to send [a] rocket into space, [but] we also want to test new technologies,” Chen said. “So that would be a methane and liquid oxygen engine, which is slightly more modern than most other propeller combinations.”

On a more personal level, the project has been a learning experience for all the students involved.

“I’ve never been in a position to lead a team before,” Khandelwal said. “So as an Electronics Lead, it’s been a learning curve for me trying to figure out how best to assign tasks, figure out people’s strengths [and] weaknesses, and get stuff done.”

Getting things done requires every team member to give the project their all.

“Pretty much every week, we have some sort of new learning to do,” Troshynski said. “I feel like it got me into a place where everyone’s learning together. We have a really good team, everyone’s intelligent and kind, and it’s a really good environment. I didn’t see myself as an aerospace engineer even half a year ago, but now I think it’s actually super interesting and a possibility.”