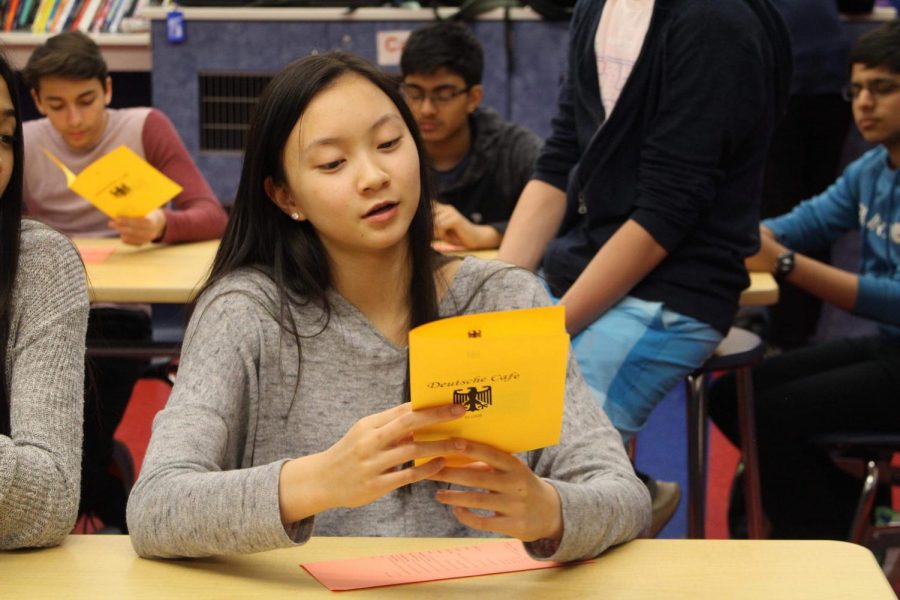 Reading across her menu, a student prepares to order traditional German food.

As part of the event, students were to order food from a given menu using certain German phrases. The GHS planned the event for German students as a way for them to both have fun and practice skills learned in class prior to spring break.

“The cafe was a way for German students, mainly German 3, to practice their German speaking skills and have some fun before break,” junior Nishant Alladi said.

However, although the event was geared towards German students, it was also open to students not in German, as with many other activities hosted by GHS such as Oktoberfest. All participants were expected to speak in German, but this rule was minimally enforced for non-German students.

“We probably could have been a bit more organized and involved non-German students in the speaking activities,” Alladi said.

Among the participants was freshman Adnan Murtaza. Murtaza, who currently takes German 1, notes how the event helped him advance his skills.

“I attended the event primarily because it seemed fun, and I had nothing else to do that block,” Murtaza said. “In addition, I already take German, so I would understand a few more things than others.”

Another main draw for participants in the event was the food, given that the event at heart was a cafe. Entrees included bratwurst, best described as a meatier hot dog, and spaetzle, egg noodles. Sides such as coleslaw and potato salad and apple cobbler as dessert complemented the entrees. In all, an entire order of an entree, side, dessert, and drink totaled up to $5.00.

“It helped me better understand their culture, and I got to eat some of their delicious food,” Murtaza said.

Packed with food and friends, the event ultimately left a positive impression on students such as Murtaza.

“Overall, it was a blast. I got to talk to a bunch of people while enjoying German food. We need more events like this for other cultures. I’d love to learn more about other cultures around the world from simply attending eighth periods,” Murtaza said.