Mainstream, yet still meaningful, BTS explores "Who am I?" through their latest record-breaking mini album. 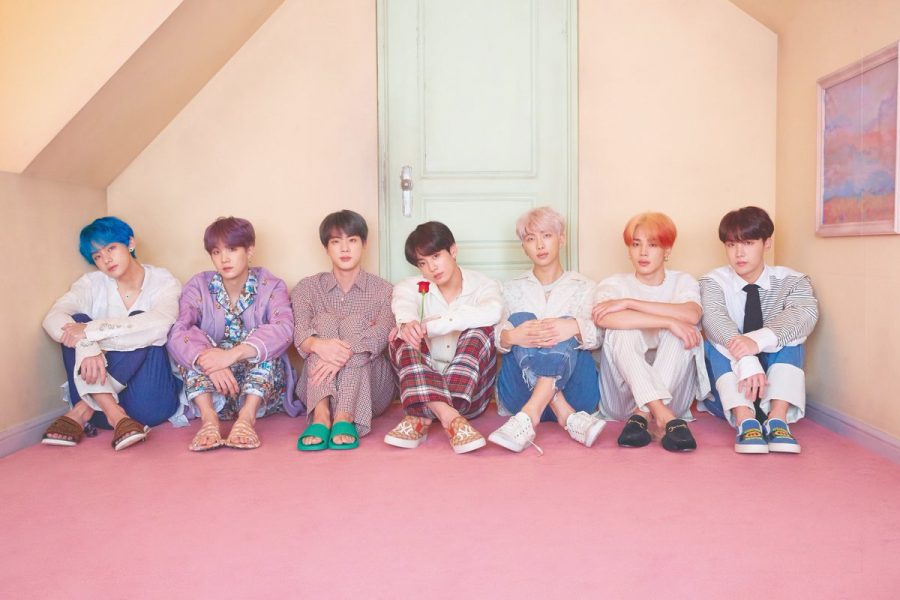 Leading up to the April 12 release of their highly anticipated album, Map of Soul: Persona, BTS posted multiple sets of concept photos as teasers. Photo from Big Hit Entertainment.

Since their humble beginnings six years ago, the seven-member South Korean boy group under Big Hit Entertainment, BTS, has attained a legendary level of global fame, amassing millions of fans in a powerhouse fanbase known as ARMY and breaking records with every single new release. Their latest April 12 release, a seven-track mini album, Map of Soul: Persona, is no exception to their steady trend of massive success.

As the first album in BTS’ Map of Soul series, following the Love Yourself era, Map of Soul: Persona opens up a new chapter for the boy group, in which they attempt to answer the question “Who am I?”

The mini album begins with a funky hip hop and trap song, “Intro : Persona,” which was released earlier on March 27 with its own music video. The track features hard-hitting rap verses from BTS’ leader RM. With his fast-paced killer flow, backed by a heavy drum beat and guitar instrumentals, RM clearly conveys the entire album’s message and sets the tone for the remaining tracks, in which BTS asks a “question which [they] won’t find an answer to [during their] whole life… Who the hell am I?” Listening to this track immediately swept me up in a wave of nostalgia as I noticed samples from their 2014 track, “Intro : Skool Luv Affair.” The song itself also reminded me of the fierce old-school style raps from their earlier tracks, specifically “Paldogangsan” from O!RUL8,2?. While not my absolute favorite from BTS, “Intro : Persona” definitely did a good job of introducing the main theme and connecting all seven tracks of the album together.

As a longtime fan of both artists, when I first heard that BTS’ title song, “Boy With Luv,” would feature Halsey, I was ecstatic. Despite this, it took multiple replays of the track before I came to love its funk pop tunes and addicting melodies. The light, airy vocals of both BTS and Halsey perfectly complemented each other and blended in all the right places; however, there were multiple times where I wished Halsey could have showcased her singing just a little bit more. The song did seem fairly mainstream overall, but it was still, without doubt, one of my favorite tracks from them since “Spring Day”, “Blood, Sweat and Tears”, and their The Most Beautiful Moment in Life series.

The remaining five tracks continue to build upon the theme of discovering one’s persona that RM introduced earlier. “Mikrokosmos” references the ancient Greek philosophy of microcosm, in which every human is their own unique world; “Make It Right,” a collaboration with Ed Sheeran, conveys hope to make the world a better place; “HOME,” featuring female vocals from Big Hit’s only female producer, Adora, calls BTS’ fans their home and refuge; “Jemais Vu” portrays the psychological phenomenon of finding something familiar, foreign instead; “Dionysus” identifies BTS with the Greek god of wine and grape harvest, who was outcast among the Olympians for having a mortal mother, similar to how BTS were initially outcasts as a K-Pop group from a small company.

With the exception of “Dionysus,” a catchy banger similar to the boy group’s hype-instilling cyphers, these remaining songs feature dreamy vocals and melodies. Personally, after the first few tracks, I started to find them somewhat repetitive and lacking in the uniqueness factor that could have set them apart from songs of the Love Yourself albums.

As a whole, I did love BTS’ signature meaningful lyrics that had captivated me almost three years ago — after all, what other artist would center their entire album’s concept around Carl Jung’s psychology theories? However, I did not find myself immediately falling in love with any of their new tracks, feeling that the majority of them were fairly mainstream and similar to their past songs released after debuting in America. Despite this, I did thoroughly enjoy listening to their new album, and I’m excited to see what BTS will bring to the table in the future.

Listen to their album on Spotify: