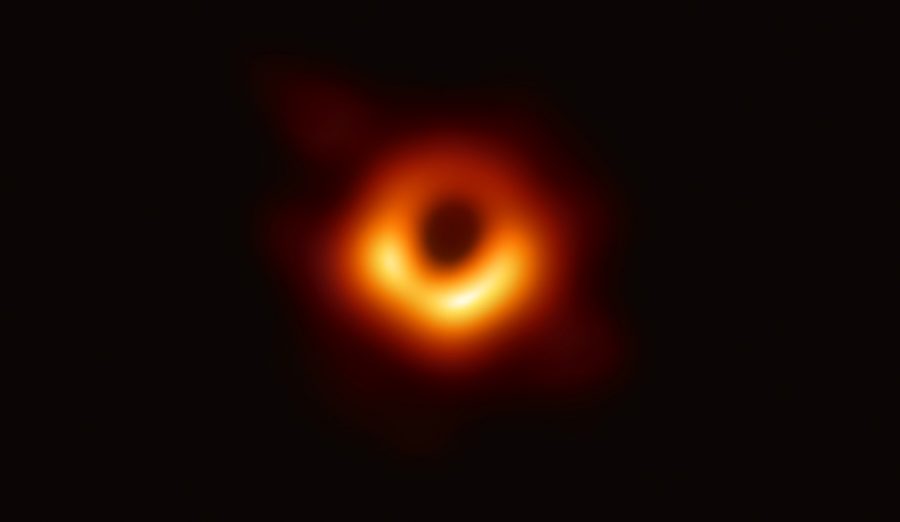 Image courtesy of www.NASA.gov. Astronomers take the first picture of a black hole - although since even light escapes a black hole, the image depicts its shadow.

Everything, even light, is sucked into a black hole’s dense center. Thus, black holes cannot be seen. However, NASA’s Event Horizon Telescope collaboration captured the first picture of a black hole – or, rather, the shadow it makes on its surrounding cloud of gas – on April 10th, 2019. Members of Jefferson’s astronomy and astrophysics lab shared their thoughts about this accomplishment.

“Obtaining a picture of a black hole now allows people to ‘match a face with a name,’ proves that black holes do in fact exist, and lets scientists now view them as physical objects rather than just equations,” senior Rachel Eom said.

The Event Horizon Telescope (EHT), an international collaboration of radio telescopes, released the first image of a black hole. Messier 87 (M87), is the home galaxy of this particular black hole. M87 is an elliptical galaxy 55 million light-years from Earth. The black hole is approximated to be six billion times larger than the mass of our sun.

According to the director of astrophysics at NASA headquarters, this accomplishment was achieved decades ahead of time. Eight radio telescopes stationed all over Earth were needed to take the image, all operating as if they were one telescope the size of our entire planet. Scientists had previously believed that to capture an image of a black hole, they would need one telescope the size of Earth.

“We didn’t have the technology a decade ago,” Astronomy and Astrophysics teacher Lee Ann Hennig said.

Katie Bouman, a computer scientist for the EHT, developed an algorithm that was used to process the data collected from the telescopes, and put them together to form an image. She gave a TED talk on the subject.

“Basically what she and her team did was first take measurements of some coordinates of the black hole, and collect images from telescopes and mirrors scattered around the world,” Eom said. “Bouman and her team would then piece the images together to “reconstruct” the black hole and fill in any remaining gaps within the measurements using Bouman’s imaging algorithms.”

There are still many unanswered questions about black holes. Why do particles surrounding black holes have such high energy levels? Where does all of the particles’ energy go when the particles fall into the black hole? With the help of this picture and further study with high-energy rays, many of these questions may soon have answers.

“Additionally, this picture is the first step to further supporting Einstein’s Theory of Relativity,” Eom said.

If higher resolution images of the curvature of matter around a black hole are obtained, they can further provide visible evidence of Einstein’s theory of relativity. This could lead to new information related to general relativity, but other areas of research as well, such as aerospace and locating exoplanets.

“There is still so much to learn about black holes and space in general, and this image is the first step in delving into the workings of the center of our galaxy on a more concrete rather than theoretical sense,” Eom said.