Welcoming the Class of 2023 to Jefferson 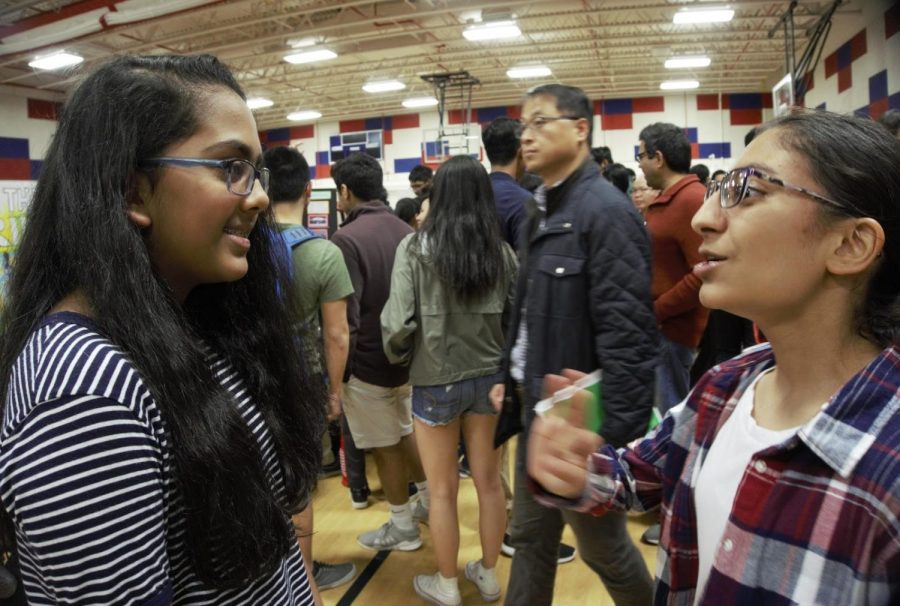 Freshmen Lily Walters talks about IBET and course selections to Ananya Banderu, a rising freshman at Jefferson during welcome night.

This year’s rising freshmen visited Jefferson for the first time on April 4 from 5:30 to 8:30 pm, the day before attendance decisions were due. All parents and rising freshmen clustered to the main gym to listen to speeches given by Dr Ann Bonitatibus and Jefferson faculty members before dispersing to explore the school. Rising freshmen such as Ananya Banderu wee making their decision based on freshmen preview night.

“So far, TJ seems really scary and intimidating. Everything is just rushing at my face and there is so much to take in,” Banderu said.

Banderu wasn’t the only one who was intimidated simply by walking through Jefferson’s corridors.

The class of 2023 was not only trying to adjust to the fact that they would be attending Jefferson, but also the transition from middle school to high school.

“TJ is pretty big and confusing. There are things like IBET and CHUM that normal schools don’t have,” rising freshman Jay Rachakonda said.

Current Jefferson students advertising for each of their respective clubs wished to give the rising freshmen a sense of community and a good impression of their new school for the next four years.

“Since I’m here advertising for volleyball, we really want to focus on the fact that they will make many friends and have some kind of a foundation for TJ before they walk in the doors, so it integrates them into the community a bit more,” freshmen Julia Lamy said.

Many TJ students had information to share with rising freshmen that they gained through their own experience.

“My biggest advice to them is not to stress and come in with an open mind. TJ is definitely overwhelming at first but as long as they keep an open mind, they can step up to it,” Lamy said.

While many current freshmen were set on scaring the rising freshmen away, some, like freshman Megan Yu, took it into their hands to reassure them.

“Often times it seems more difficult until you actually experience it for yourself. The stories of others are helpful but don’t get scared away because you heard someone had a bad experience,” Yu said.

Every rising freshman had varying levels of confidence ranging from those who were confident in getting straight As, and those who know exactly what they had gotten themselves into based on stories they had heard from friends and siblings.

Others were also skeptical of finding a balance between school work and extracurriculars.

“I do a lot of activities outside of school like lacrosse, soccer, and piano and I hear that TJ is really demanding in time, so it really makes me wonder how I can handle everything when I come here. I know I will have to cut down on the number of things that I do but I also know that I have a lot to learn coming here,” Rising freshmen Nicole Shou said.

It seemed that Jefferson’s academic pressure and competitive nature had already begun to get on the nerves of rising freshmen.

“I feel lied to because the faculty says we don’t need to take summer school but then compared to everyone else, since there is a lot of competition at TJ, you’re gonna have to end up taking summer school,” rising freshman Aakash Vittala said.

On the note of summer school, Yu also gave advice on how it fit into students’ schedules.

“It isn’t required to take summer school although they may seem pressured to. Just make the right decision for you and the path you want to take,” Yu said.

Despite knowing the extreme workload, most rising freshmen were compelled to enter Jefferson because of the opportunities and the chance to work with the labs.

“I think TJ is a good school, but I’m scared of dying from the workload. I’m really excited for the labs at TJ since I’ve heard the research facilities are great,” rising freshman Tiffany Lee said.

Another rising freshman, Emma Cox, had heard enough stories from her older brother, senior Matthew Cox, to know that keeping up was a lot of work, but the activities and people made it worth it.

Overall, most rising freshmen had mixed feelings as to what they would accomplish at Jefferson and if going to Jefferson was the right choice.

“TJ is very modern and different from other schools. There are a lot of courses here so there’s a lot of diversity in what you can take,” rising freshman Sidd Rangavajjula said.