Ryan McElveen runs for chairman of the FCPS school board 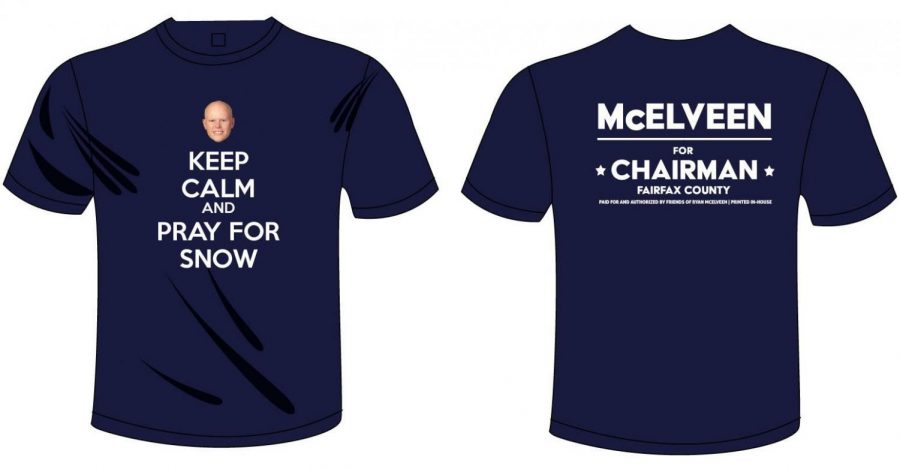 A part of Ryan McElveen's campaign for school board chairman of FCPS includes selling shirts that call back to his famous reputation for announcing snow days and delays.

Though he’s not the superintendent of Fairfax County Public Schools (FCPS), Ryan McElveen is known by most students at FCPS for deciding and announcing the snow days online. In reality, he is taking on a much more significant role. He’s currently running for a leadership position as chairman in the FCPS school board, or the Board of Supervisors.

This year, McElveen and his supporters have been campaigning to raise awareness of his goals by gathering student supporters, selling merchandise, and spreading the word on social media.

Before his decision to run, McElveen had served in the school board, representing over 1 million county residents, ever since January 2012. When he joined, he was the youngest person ever to have done so, being 25 years old. He made a name for himself amongst students at FCPS with his Twitter posts announcing snow days and delays.

In the school board, he helped to reform mental health programs, start school at later times, and turn Mondays from half-days into full-days, a change that occurred back in 2015. Running for chairman, McElveen’s main goals are to have universal pre-K programs that are all free for all county residents, give all students access to the Internet, and lower taxes.

In another format of campaigning, McElveen is selling merchandise to spread the word, such as bumper stickers and shirts. One the shirts ties into McElveen’s iconic image amongst the students, saying “Keep calm and pray for snow.” He is also selling autographed ice scrapers online, another callback.

Until May 20, the day of voting, students, parents, and residents of the county alike continue to support and spread the campaign for the famous snow day representative, school board member, and chairman candidate.