Slurping up the funding

Behind the success of the class of 2021's smoothie sale. 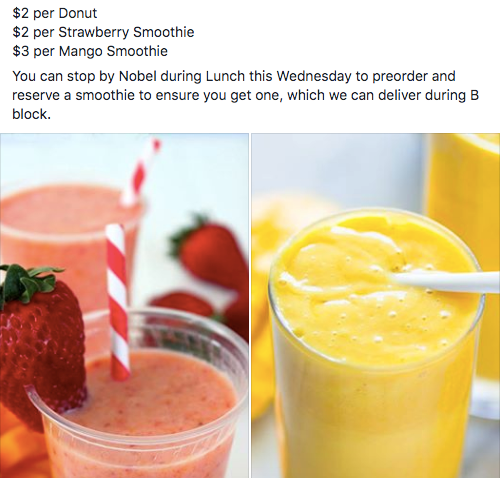 Bellies empty. Dollar bills at the ready. Within the short, ten-minute passing time between 8A and 8B block, the Class Council of 2021 found students swarming their tables for a taste of their smoothies and donuts. In contrast what bake sales normally sell, the sophomore class council decided to branch out.

“So in our quest to find something unique to sell, we looked through what the [sophomore] class had said they wanted and someone said smoothies, so we went with it,” treasurer Matthew Hwang said.

The smoothies caused many concerns and obstacles for the class council, such as the fresh fruit ingredients it would require, the preparation time and tools needed, and the containers they would sell them in. Undeterred by these hurdles, class council did not regret their decision with the one-of-a-kind smoothies being such a big hit, although they did receive post-critiques about the over-sweetness of the smoothie.

“The criticisms that we got were about the sweetness of the smoothie,” Hwang said. “[But] in terms of uniqueness, I believe that we chose the right foods to sell. We attracted an unexpected[ly] massive crowd.”

Despite the council’s initial worries about the smoothie sale, the massive crowd swarming the tables for smoothies and donuts were made up of all classes, from freshmen to seniors.

“The sale was extremely successful compared to what we had expected,” Hwang said. “We were even told by someone from the finance office that our crowd was the largest she had ever seen at TJ. As a class council, we are very happy with the results [of the sale].”