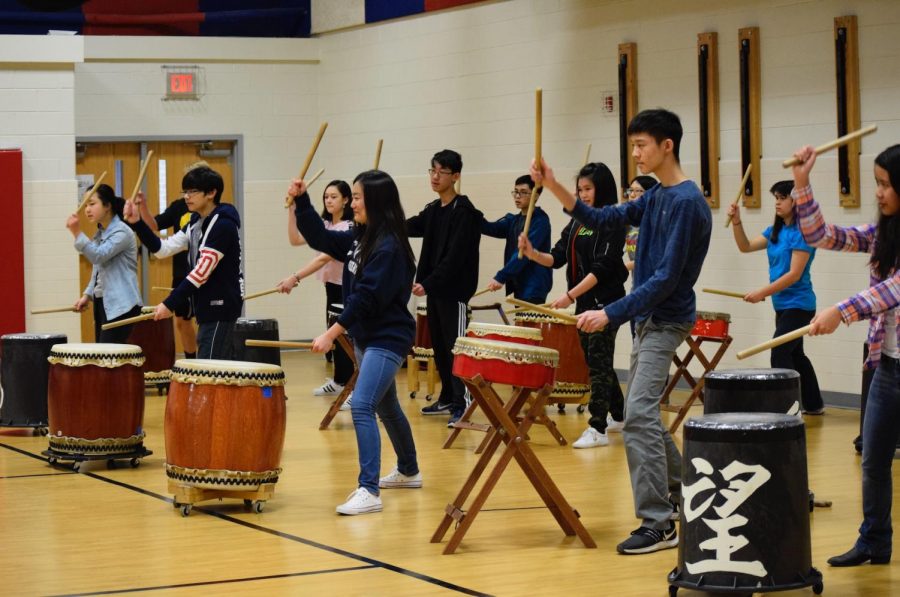 Determined and concentrated at the task at hand, students under the guidance of taiko artist Mark H. Rooney prepare to strike the taiko drum. Students both interested in Japanese culture and involved with the Japanese program attended a workshop on Friday, March 22 to immerse themselves in the Japanese culture.

On Friday, March 22 during 8th period, a workshop headed by taiko artist Mark H. Rooney was held at Jefferson. Many of those who attended were taking Japanese as one of their classes, or involved in Japanese programs.

“No, I don’t take Japanese but I’m quite involved with Japanese programs,” junior Lavanya Nawlakhe said. “I chose to go to this event because the taiko is a fascinating cultural aspect of Japan, and I wanted to learn more about it.”

The event kicked off with a taiko drum demonstration performed by Rooney and Japanese teacher Otani Sensei, filling the room with energy.

“Mark Sensei, the drum instructor, made us feel very welcome and we were able to play on authentic Japanese taiko drums,” senior Vivian Nguyen said. “On top of that, the duo performance between Mark Sensei and Otani Sensei blew me away with its energy and vigor. The workshop built up my excitement to learn more about taiko drumming.”

Then, the workshop started, with Mark Sensei teaching students the basics of holding the bachi, or drumsticks, and he then began to teach different methods of playing on the drums. This gave many students the opportunity to not only learn a new instrument, but to also expand their Japanese knowledge.

“I was always interested in the many different aspects of Japanese culture, including its traditional music,” Nguyen said. “The taiko drum workshop was a special opportunity to not only witness a traditional instrument performance but to experience it firsthand and play the drums as well.”

Many students enjoyed the event, primarily due to their love for music, as it allowed them to connect with a different culture.

“I do like music as a hobby and was involved in playing many instruments and doing vocals. I feel like, although instruments are created in a certain country and integrated into their respective cultures, they are, in a way, universal,” Nawlakhe said. “Anyone can learn how to play an instrument from another country and since they all have unique sounds, they can be used in music anywhere. Therefore, it is always beneficial to learn about and expose yourself to different instruments from around the world, which is why I took this opportunity.”

Other students simply felt that the joy of learning to play an instrument, even without experience, was fulfilling.

“I do play music as a hobby and I really did enjoy learning new techniques on a unique instrument, but I don’t think that my experience was really changed from it,” Nguyen said. “One amazing thing about taiko is that people who don’t pursue music in TJ normally will line up to learn anyway. The enthusiasm to learn taiko is the same for everyone, regardless of music experience.”