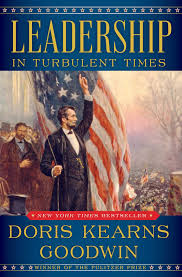 The front cover of “Leadership in Turbulent Times”. Image courtesy of Amazon.com.

Written by historian and accomplished author, Doris Kearns Goodwin, the book follows the lives of some of America’s most iconic Presidents from their early life through their deaths. Goodwin shows how Lincoln, T. Roosevelt, F. Roosevelt, and Johnson, while all coming from different backgrounds became America’s most important men. Throughout the book, Goodwin often highlights how these presidents, throughout their lives, exhibited important leadership traits.

A book of this nature can easily get boring as it delves into the details of American history while at the same time exploring the seemingly abstract concepts of leadership. But, I think it’s safe to say that Goodwin blends these less interesting components of the book with strange, funny, and eye-opening anecdotes about the men. The truth is, that these men, as regal and straightforward as they seem on paper, are so nuanced and quirky in reality. They had a whole secret life that the public didn’t know about. It is this unheard of secret life that Goodwin does such a good job encapsulating.

Goodwin has previously published historical books on all of the Presidents she covers in this book. She compiled all of that information and used it to investigate leadership in this new book. Even though it was only published at the end of 2018, “Leadership in Turbulent Time” has gotten rave reviews.

As a whole, the book is great, but what makes it really special is Goodwin’s connection to one of the Presidents discussed.  Goodwin actually worked closely with President Johnson which makes for an interesting perspective on a very controversial administration. Through Goodwin’s storytelling ability, one is able to see the inner workings of a presidential administration through emotional times of both triumph and failure.

I give “Leadership in Turbulent Time” high praise, and would recommend it to anyone with even the slightest interest in politics, history, leadership or biographies. There are so many moral lessons woven into a larger story presented in a historical context. And that is what makes this book such a good read.