One Time, One Meeting

Chiben Japanese exchange students reflect on their visit to America. 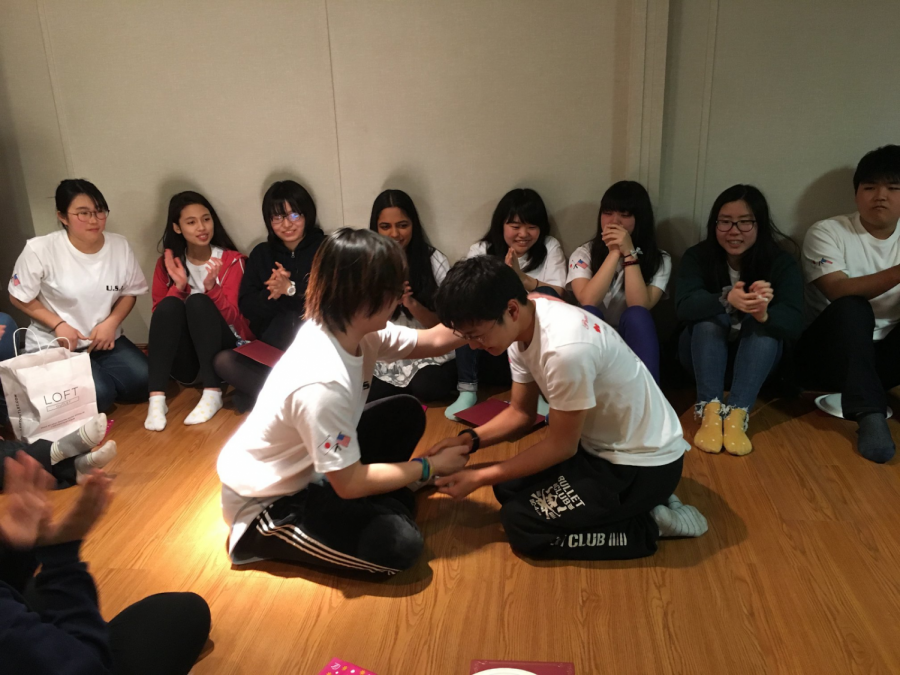 Junior Robyn Chang comforts her exchange student, Chiben Gakuen Wakayama first-year Shingo Haruta, as the two say their goodbyes at the farewell party. “I was sad that [Shingo] was leaving but I wasn't that sad because I knew I could still talk to him [via social media],” Chang said.

Ichi-go ichi-e. The Japanese adage, meaning “one time, one meeting,” fits the transience of the two-week exchange the visiting Chiben Gakuen Wakayama students completed from March 2 to March 16. Though a group of Jefferson students will do a reciprocal exchange in Wakayama over the summer, half of the Chiben students’ hosts will not be present. This has made some of the Chiben students treasure their memories with the Jefferson students.

“Though [people I know] will be coming over the summer, there are people who I’ve met who won’t be coming, so it’s truly ‘one time, one meeting,’” Chiben first-year Kako Okada said.

On the other hand, some of the students did not necessarily want to go to America to make connections. Some wanted to improve their English in an immersive setting while others just had an interest in American culture.

“I wanted to get better at English.” Chiben first-year Tomoki Ikoma said.

In the end, though, English improvement was not necessarily the case. The improvement was variable, with some more English-proficient students improving greater than others.

“I’ve made a lot of friends and I have more confidence in myself.” second-year Mayuna Doi said.

These friendships have made a lasting impact on some of the Chiben students.

“My favorite thing was that I was able to make many friends with TJ students inside and outside my host family,” Okada said.

Although some of the Jefferson students will not be able to come to Japan this summer, many people keep in touch through social media like Messenger or LINE. In any case, this exchange has made a lasting memory on the visiting students, some of whom have vowed to return to America.