Freshman Lauren Spehlmann made the varsity girls soccer team, but a wrist injury keeps her sitting on the sideline. 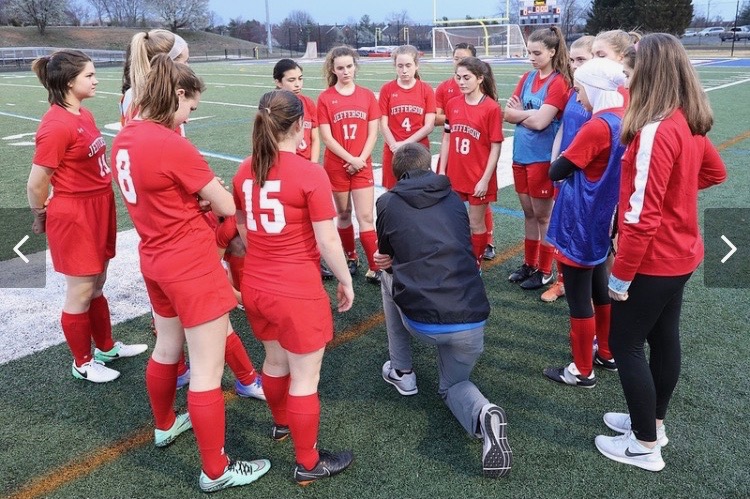 Freshman Lauren Spehlmann (far right, in red warmup jacket) stands with her teammates as the coach addresses the team.

It was over before it began.

Freshman Lauren Spehlmann was at her third day of soccer tryouts when she tripped and fell backwards.

“I don’t remember exactly what happened, but I fell backwards and landed really hard on my wrist,” Spehlmann said. “I noticed my arm was tingling and I looked down and saw that there was a huge bend in the center of my lower arm, like it was made of rubber.”

Spehlmann’s shock and pain had continued as she walked to the trainer’s office from the field.

“That walk felt like the longest walk of my life,” Spehlmann said.

Spehlmann recovered quickly, getting fitted with a sling and later a cast as her wrist injury became less severe. However, she still experienced both academic and physical difficulties.

“That first week with the sling was pretty rough because I had to do everything one handed,” Spehlmann said. “We were [also] just learning how to use power tools and solder [in Design & Tech] so I was really concerned overall about the robot project.”

Later on in the recovery process, the swelling and pain Spehlmann had experienced during the first couple of weeks after her injury subsided. While this was an improvement physically, Spehlmann was still frustrated.

“My arm feels better now so I wish I could go back to playing right away,” Spehlmann said.

As a soccer player from the age of four and and travel player since age nine, Spehlmann is invested in her sport. She was forced to give up playing club soccer in order to accommodate her morning swim practice into her schedule.

“I hadn’t really taken breaks from soccer before until last year, so I was really excited for the opportunity to play again,” Spehlmann said. “[Missing out] has made my injury a lot harder to deal with.”

Despite her lack of practice for over a year, Spehlmann made the varsity girls soccer team.

“I was really happy when I found out I made varsity and a little surprised because, like I said, it’s been a year since I played so I’m not as good as I used to be but I was really excited to play and meet new people,” Spehlmann said.

Since her injury rendered her unfit to play, she mostly stays on the sidelines during games, cheering the team on and occasionally taking statistics.

“I feel like I’m missing out on a lot, but it’s still fun to watch,” Spehlmann said.

As an active person who swims and plays soccer competitively, Spehlmann took the lack of exercise hard.

“I really just miss exercising in general. When I play soccer I can forget about school for two hours,” Spehlmann said. “It also makes me a lot more stressed because exercising is a way to relieve stress for me.”

Spehlmann hopes to recover quickly enough to play for Jefferson in at least one game. Though her return is something for her to look forward to, the event is not entirely filled with positive emotion.

“I’m excited to go back to play again, but [because of the injury] I’m not as strong or as fast as I used to be, so I’m feeling a little nervous about returning,” Spehlmann said.