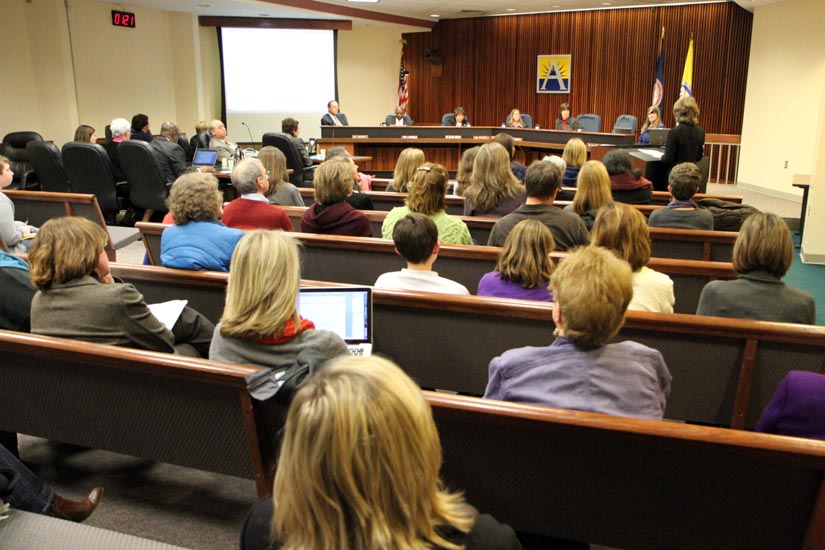 Parents listen to a school board public hearing on block scheduling. On March 28, a public hearing was held to discuss the proposed budget for the 2019-20 school year.

Arlington School Board superintendent Dr. Patrick Murphy’s proposed budget for the 2019-20 school year suggests cutting the cost of transportation to Jefferson for Arlington students, and requiring families to cover the cost instead.

Currently, the School Board pays $140,000 for buses transporting Arlington students to Jefferson. However, under the new proposed plan, families — excluding those that receive free or reduced lunch — would split the cost per student. Based on the current number of students who frequently ride the bus, this would amount to a cost of approximately $3000 per student.

“By considering cutting [funding for transportation to] TJ, Arlington shows that  they don’t care about offering options and opportunities for gifted students,” freshman Aiden Zurcher said.

The move is the latest in a series of proposals in recent years that would have hindered Arlington students’ access to receiving an education at Jefferson. All suggestions were struck down following public outcry, however.

“As far as I’m aware, sending Arlington kids to TJ doesn’t cost the county significantly more than paying for their education in Arlington would, so the county’s resistance to sending kids to TJ really puzzles me,” junior Robert Crotts said. “The Arlington school board ought to put the interests of students before anything else, and the opportunities available for STEM-interested students at TJ are miles beyond anything available in Arlington.”

As members on the Arlington School Board have continued to bring up the topic of ending its partnership with Jefferson, the county has worked to promote possible alternatives to Jefferson. Nonetheless, Crotts remarks that these opportunities do not compare to Jefferson.

“It seems to me that Arlington is trying very hard to set up programs of their own that can compete with TJ. Arlington Tech High School, which took its first freshman class the year I came to TJ, is the most obvious example,” Crotts said. “There’s also HB Woodlawn, although it actually preceded TJHSST; I think Arlington likes to imagine that HB is comparable to TJ, but along with the new Arlington Tech it’s hilariously inadequate.”

A finalized budget, totaled $640 million for the 2018-19 school year, will be passed in April based on input from other school board members and public opinion. One outlet for the public to express their opinion was a public hearing on the budget in front of the School Board on Thursday, March 28, and a number of Jefferson students and parents, including Zurcher, spoke.

“I wanted to speak because I wanted to remind the board the importance of sending students to TJ,” Zurcher said. “Arlington should send students to Jefferson because it costs 5,000 dollars less, per student to attend TJ than the average student cost. It helps with overcrowding, and most importantly, it gives talented and gifted students the ability to further their education and their love of learning.”