Five Feet Apart: Bringing Tears to All Our Eyes 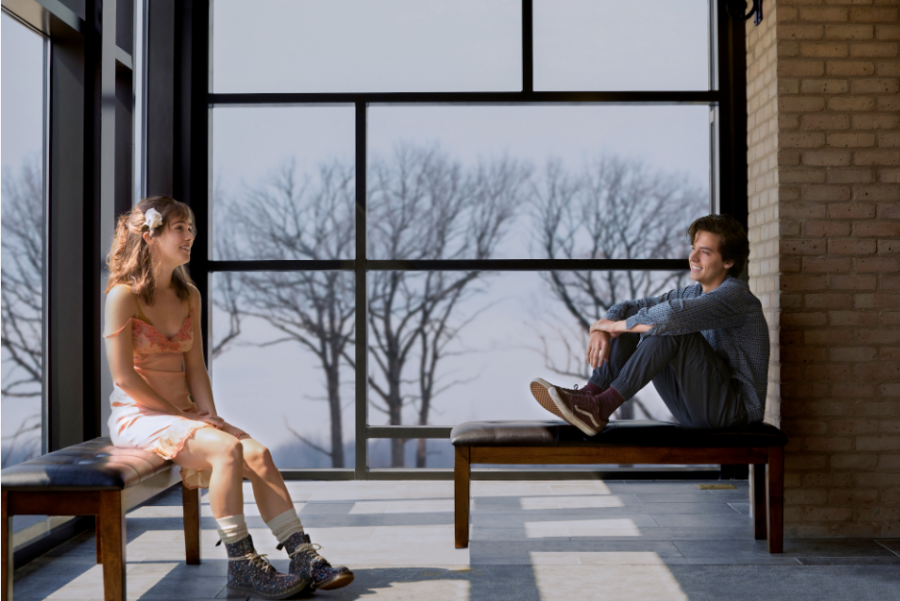 Stella (Haley Lu Richardson) and Will (Cole Sprouse) sitting in the hospital ward together. In order to not catch each other's bacteria, they must remain six feet apart at all times.

Almost nobody left the theater with dry eyes. Even though I used none of the tissues I was advised to bring with me, it took all my strength not to cry during this movie.

Five Feet Apart, released March 15, starrs Haley Lu Richardson as Stella, a teenage girl with cystic fibrosis. She is at the hospital when she meets Will, a teenage boy who also has cystic fibrosis, played by Cole Sprouse. Stella first starts talking to Will because she wants to make sure he is doing his treatments, but they slowly fall in love with each other. However, they cannot stand within six feet of each other if they don’t want to catch each other’s germs and infections. If this happens, their chances of dying increase tremendously.

Cystic fibrosis, more commonly called CF, is a hereditary genetic disease originating in the genes that code for a protein that transports chloride ions out of a cell. Mutations to this protein result in mucus buildup in organs such as the lungs. This can in turn lead to airway obstruction and other respiratory issues that make it difficult to breathe.

While both Stella and Will have CF, Will is also infected with B. cepacia. While this bacterium does little or no harm to healthy people, patients with cystic fibrosis can be infected by it very easily. Researchers are still unsure why it affects people with CF and poses little risk to the general population. When a CF patient is infected with B. cepacia, their lung function either declines slightly or rapidly, depending on which out of over 20 strains they are infected by.

As of right now, there is no cure for CF. The average lifespan for people infected by CF is 47.7 years, which is why the goal of current treatments is to give patients the prospect of a longer lifespan and quality of life in general. There are currently three FDA-approved therapies for CF, which are used based on which mutations to the chloride-transporting protein a patient has. All three of these treatments are lifelong.

Five Feet Apart not only explores these physical effects of CF, but also touches on its mental aspect. Though scientists have determined that CF patients are two or three times more likely to develop mental disorders such as depression, it is not a widely-researched topic. This movie really brought these issues to light in a mature and believable way. Stella is grieving the loss of her sister, Abby, who had an accident while cliff diving, and her parents’ divorce. She feels like she can’t die because she doesn’t know how her parents will be able to cope with that after all they’ve been through, a feeling termed “survivor’s guilt.” On the other hand, Will feels like there’s no reason for him to live if he’s going to die anyway. It is Stella who makes him realize that everyone is going to die eventually whether or not they have CF, and that he should try to enjoy life while it lasts.

Not only did Richardson and Sprouse do an excellent job portraying their characters in a way that made me care for each of them, but the supporting roles made the entire plot even more intriguing. Poe, another teenage boy with CF and Stella’s best friend, played by Moises Arias, acts as an invisible third wheel, helping both Stella and Will as their relationship gets serious. Their nurses and doctors care for each of them more than they realize, which shows in every medical emergency that occurs during the movie. The love Stella’s parents have for her and how much effort Will’s mother has put into getting him his treatments made me realize what they would be missing if either of the teenagers died, and exactly how that would make them feel.

The script was somewhat formulaic, even though it came from an angle that has never been approached before in entertainment. Stella meets Will, who seems like a teen rebel at first, then slowly falls in love with him. At the same time, she is influencing Will, literally changing his outlook on life. After the climax, Will decides that he has to leave because if he doesn’t, Stella will be in greater danger of dying.

In my opinion, while the basic plot points of this movie are a bit predictable, the acting and the message the movie sends make it worthwhile. The amount of emotion I felt during this movie was unlike anything I have felt during a movie before. I would recommend this movie to middle and high school students that do not mind their heartstrings being tugged. Just don’t forget to bring tissues and wear waterproof makeup if you do go see Five Feet Apart.