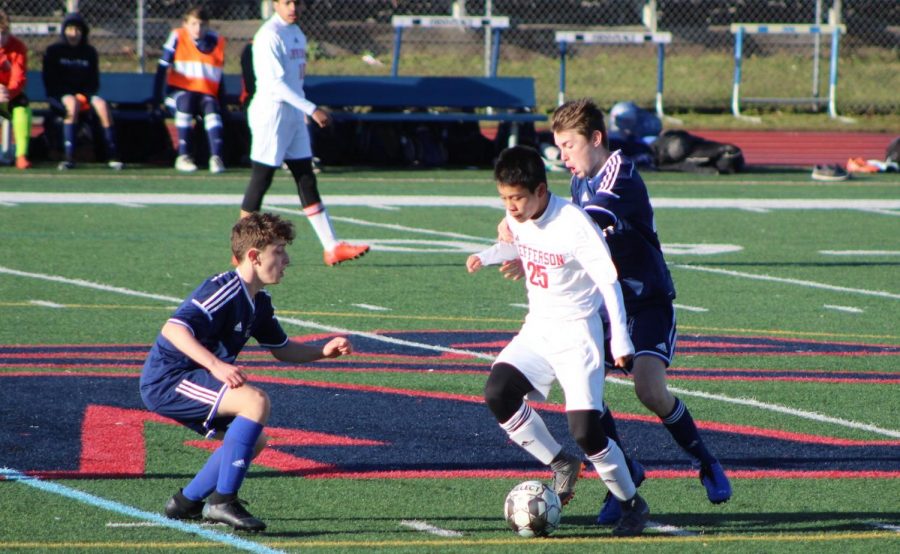 Dribbling down the field as two Woodson defenders attempt to steal the ball, midfielder Jason Zhong looks to pass the ball. Off to a slow start, the Colonials found themselves down by a goal in the first half but managed to hustle and clinch a 2-1 victory.

On Friday, March 22, Jefferson’s junior varsity boys soccer team played their fourth game of the season against W.T. Woodson. The JV boys team sought to win their first game of the 2019 season. In a surprising twist of events, Jefferson made a comeback and secured the victory to defeat the Woodson Cavaliers 2-1.

Neither players nor fans expected the team’s victory, their first in nearly three years. Prior to the match against Woodson, the most recent victory for the JV boys soccer team was back in May 4th of the 2016 season against Washington-Lee. In previous years, the JV boys soccer team struggled to win a match with records of 0-11-1 and 0-11 in the 2017 and 2018 seasons respectively.

Within the first minutes of the game, Jefferson started off strong with a shot on goal but failed to convert. However, Woodson began to counterattack just minutes later, creating numerous chances and opportunities to score. Initially, Jefferson was off to a slow start as the midfielders had difficulties connecting the ball up with the forwards, while the defense struggled to keep up with Woodson’s strikers. Just seven minutes into the game, Woodson scored on a ground cross, putting the Cavaliers up 1-0.

Desperate to tie up the game, Jefferson began to press forward and pressure Woodson’s defense, which almost led to a goal, though unfortunately Jefferson’s header hit the crossbar and deflected out for a goal kick. Both teams soon struggled to score and found themselves losing the ball back and forth. For most of the first half, Woodson kept attacking and pressing Jefferson’s defense with more than five shots on goal, three corner kicks, and four free kicks.

Minutes into the second half, Jefferson started off strong with midfielder David Xiang crossing the ball to forward Nicholas Britto who then took a shot, which was blocked by Woodson’s goalkeeper. Woodson’s offense then played a counterattack and moments later, with nothing but the goalkeeper standing between a Cavalier striker and the net, Woodson found itself with golden chance to double their lead, but surprisingly failed to do so as their shot hit goal post and defected off.

Seconds later, Woodson soon found itself in another decisive situation where they could double their lead. However, the Cavalier’s wide open shot was blocked by goalkeeper Pranav Bangarbale. Failing to convert on two golden opportunities, Jefferson saw a glimmer of hope in making a comeback to defeat Woodson.

“You always got to have that zero-zero mentality, so no matter whether you are winning or losing you have to put 100% effort in the game,” Bangarbale said.

Jefferson caught a break when Bangarbale blocked a shot in the top right corner as two Jefferson defenders ran alongside the Cavalier striker. However, in an unexpected twist, 10 minutes into the second half, Xiang found the ball in Woodson’s Half near the net and dribbled before taking a shot, which went between the legs of the defenders and into the net to tie up the game.

“[Woodson’s defenders] had a bad pass to me and my teammates really just gave me an opportunity to get the goal, and I’m lucky to just get the start,” Xiang said.

Re-energized and excited at their success, the team began to apply pressure and make numerous attempts on goal, which created numerous chances and lead to several free kicks and corner kicks, though Jefferson was unable to successfully convert.

Despite this, in the remaining 12 minutes, Jefferson lead a barrage of attacks as they had over 10 attempts at goal with four of those on target. With time running out, Woodson players became increasingly frustrated at their performance and became aggressive. However, Woodson proved to be no match for Jefferson as defender Todd Ritter scored on a cross with just 11 minutes remaining in the match.

With victory in sight, the JV boys soccer team hustled to maintain their close lead against the Cavaliers. Seconds later, Jefferson earned another free kick and had the chance to double their lead, but the shot went far above the crossbar for a goal kick. Minutes remaining in the match, the Colonials were careful not to give away any unnecessary fouls. Suddenly, amidst a chaotic scene, midfielder Jason Zhong sprinted down the field while dribbling the ball with nothing but the goalkeeper who was in the way of attaining certain victory. In a breakaway chance, Zhong shot the ball but narrowly missed, hitting the side of the net.

As the referees blew the final whistle, the coach Singh and the bench players stormed the field and celebrated the long-awaited victory with their teammates. Shouting with joy and jumping with excitement over the win, the team quickly made their way back to the bench for coach Singh’s victory speech.

Though Jefferson defeated Woodson 2-1, the team got off to a slow start and were down by a goal for the majority of the first half. Throughout the match and even in his victory speech, he noted the improvements that the team needed to make for upcoming games against stronger teams.

“We need to definitely start with more aggressiveness, more energy. I think that the guys are used to kind of letting the game come to them. We just need to keep on practicing and we need better starts in the game, and hopefully that we can take a one nothing lead instead of going down one nothing,” Singh said. “We just need a little bit more intensity, little bit more focused in the beginning, and most likely, good things will come.”

Nevertheless, Singh did mention how much the the team improved over the past few weeks and the aspects of the match against Woodson that were better than what he expected.

“Definitely the focus [improved]. They didn’t put their heads down after the one nothing. They were able to just keep on fighting. They knew they had this game. It was just a matter of communication, creating opportunities, and really just playing the whole game,” Singh said. “Today for sure we saw a better effort and the boys coming together as a team, instead of playing individually.”

In the end, both fans and players were excited to win their first junior varsity match in nearly three years, and Singh looks forward in maintaining the positive momentum of the team.

“Today was a good game. Definitely better effort and more intensity than usual, and clearly the boys showed that they wanted to win, so they came out with more aggressiveness towards the end,” Singh said. “I’m happy to get a win. It’s been a long time. They deserved, the school deserves, so hopefully we’ll just keep on going.”