Chiben Gakuen students and Jefferson students form otherwise unlikely relationships with each other through the annual cultural exchange program. 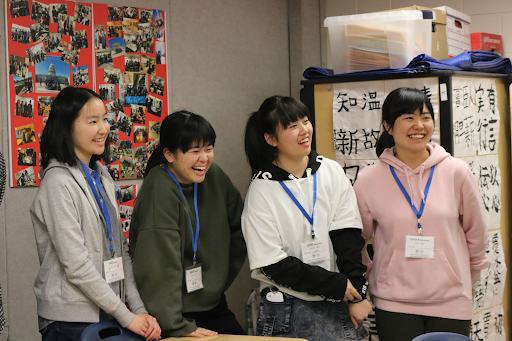 Circling the Japanese classroom at Jefferson, high school students normally separated by almost 7000 miles stand clapping and cheering for each other at the exchange students welcome event. The twelve students from Chiben Gakuen in Wakayama Prefecture, Japan introduce themselves in English, talking about their favorite American foods, while the Jefferson students across the room describe their favorite Japanese foods. Each person is met with exclamations of delight as students recognize the dish being described.

“I was nervous about introducing myself,” sophomore Trung Phi said. “But when I said my favorite Japanese food was onigiri, a rice ball wrapped in seaweed, the Chiben students were all excited that I found the snack as delicious as they did.”

The eighth period welcome event allowed Chiben students to learn more about school life at Jefferson as well as socialize with their American hosts and other Jefferson students. Thrust into a new country just a few days ago, the Chiben students already seemed at home, laughing and talking in both their native language and English with their new friends.

“Talking to students and people the same age as me has been fine, but sometimes talking to older people and adults is slightly difficult,” Chiben first-year Ayu Osawa said. “I’ve been able to become closer to people by sharing our hobbies and what we like.”

Other Chiben students seemed to agree. They were able to connect to their hosts and other Jefferson students on a variety of topics, especially shared interests and ideas.

“[My exchange student] likes K-pop, which was one of the first things we talked about,” senior Nyein-Chan Win said. “[Tomoaki Matsuyama] introduced me to groups like Twice and I showed him music by Blackpink.”

Like any group of friends, the Chiben and Jefferson students talked about shows they’d watched and music they’d listened to and liked.

“I think it’s definitely easier to talk about entertainment and media we consume,” Win said. “We watch shows and listen to music because we like it, so it’s natural that we want to share the things that we enjoy. Tomoaki and I really like playing Super Smash Bros, although he was surprised when he found out I like fighting games.”

While Tomoaki’s surprise came from Win’s quiet demeanor, the other Chiben students noted some differences between Jefferson and their home.

“I was surprised by all the different ethnicities in America,” Chiben first-year Tomoki Ikoma said. “The idea that America is mostly white people is sort of perpetuated in Japan.”

Ayu noticed the diversity of America and Jefferson as well.

“I knew America as the land of freedom where everyone has the ability to do whatever they wanted,” Ayu said. “After experiencing life here firsthand through my visits to DC and New York City, I’ve wondered whether it’s actually freedom that defines America or if it’s more the coming together of different people, ideas, and cultures.”

“Japan tends to focus on the little details, often missing the bigger picture.” Ayu said. “For example, if a police officer was distracted while on duty, his punishment would come before ensuring that the law is still being enforced.”

The opportunity for Chiben and Jefferson students to learn and connect with each other has been a meaningful one.

“While we’re learning about Japanese [at Jefferson] and Japanese culture, we don’t really get to apply it to daily life,” sophomore Vishal Kanigicherla said. “This cultural exchange program has been really rewarding; [the Chiben students] are normal people, of course. They’re just high school kids like us. We really get to talk to them and  understand each person as an individual and not just as someone part of this greater culture.”

After two weeks of shared memories and meaningful friendships, the Chiben students had to board their long flight home.

“I actually didn’t think I would cry so much [at the farewell party],” Win said. “We had to make speeches to each other in the middle of a circle and talk about what we appreciated about each other, and when it was Tomoaki’s and my turn, I went up feeling confident that I would show only happiness. But then all of a sudden, I couldn’t help breaking down.”

Luckily, the second part of the exchange program involves Jefferson students visiting Japan over the summer to experience Japanese culture.

“I’m really excited to see them over the summer,” Win said. “I’m just  grateful I got to spend so much time with Tomoaki and everyone else.”