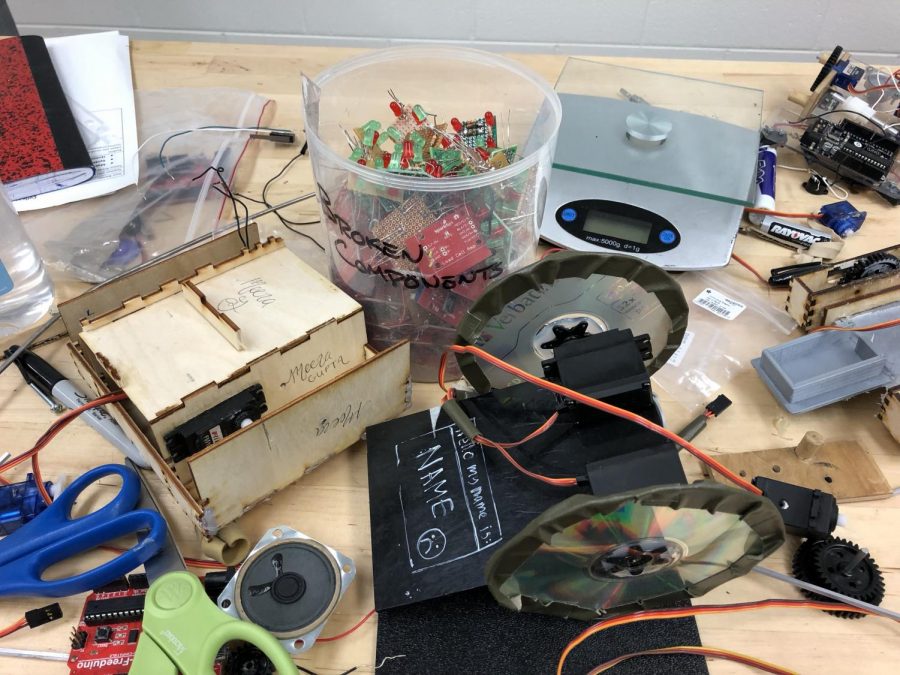 Freshmen students use servos and LED lights connected to an Arduino microcontroller to build their robot.

Perhaps the most iconic freshman memory of every Jefferson student is the robot project, whether or not their robot actually moved. However, recently the Design and Technology teachers have introduced new rules, with the Class of 2022 arguably experiencing the height of robot reform.

“We’ve gone from a simple obstacle/maze course where the student received points based on randomness to actually having more coding, more autonomous robots. Three years ago, it was pushing the cups into certain goals, and parking in a certain zone. Last year, it was the Pac Man maze, picking up balls, getting points, and then landing in the zone.” Monica Geiger, one of the Design and Technology teachers, said.

However, this year, the method in which the robot is scored has again been revised, with a slightly new maze and new challenges.

“We’re doing something very similar, where you still need to navigate a course and go in a certain path. The objective is still to code autonomously, but we differentiated it just a little bit for those who want more challenge. They still need to actually grab a ball, or at least possess it. But, possess this year does not mean pick up, it means that you need to be able to direct the ball and position it in certain places.” Geiger said.

Secondly, Geiger describes how the new machines, like the 3D printers and laser cutters, have changed how students construct their robots. Only in the last couple of years have students had the opportunity to use such machines.

“The laser cutter really has changed the bot construction immensely. As tech teachers, [we] really want students to have more hands-on experience with building, more troubleshooting with actual handwork or with tools and fasteners, not glue guns. We really want students to understand the craft of tech and the problem solving that it [requires].” Geiger said.

Third, each student is now limited to spend only $15 on their robot from outside of class materials. Although the idea of the robot is to use in-class materials, previous years’ students did not have a set establishment for how much they were allowed to spend.

“A lot of kids spend a lot of money, but then they can’t get it to work. Then, they’re focused on the wrong thing. The biggest part of the bot really should be culminating, that students have something that has electronics, an Arduino, something that they build based on their own CAD drawings.” Geiger said.

In addition, the bot itself is no longer the end-of-year culminating project. Not only did students start the project earlier this year in order to relieve stress students face with TJ Star, IBET papers, and AP tests, but they also plan to have another culminating project, different for every teacher.

Interestingly, when asked if these reforms mean that the robot project has become easier over the years, Geiger responded affirmatively.

When asked about whether she thought that making the project easier is a step in the right direction, Geiger responded by describing changes not just for the robot project, but across the D&T curriculum. These changes that seem to make the class “easier” are due to the fact that some students walk in with no coding and technology experience, while others thrive in competitive robot competitions such as the FIRST Tech Challenge. Geiger explains that the objective of D&T is for every student to better their technical skill set.

Therefore to accommodate all students, Geiger explains that “the reason for the changes is that we’re trying to meet the needs of the students based upon where they are, and bring them forward to what would be a more up-to-date skill set.”

When asked about their opinion, however, freshman Terrel Tan explained that there is still room for further growth.

“We have a severe lack of knowledge on things such as laser cutting and 3D printing, and although those things are not necessary for a functional robot, they’re useful to know so we at least grasp their applicability,” Tan said.

In addition, Tan explains that sometimes your experience depends on your teacher.

“I feel like guidance is skewed between IBETs; I’ve heard many people claiming that they haven’t even started their project because they have no idea what to do,” Tan said.

Oftentimes, students become frustrated when building their robot, especially when it doesn’t work and students can’t figure out why. However, Geiger explains that this challenge, learning something new, is the beauty of Design and Tech.

“If you watch a freshman from the time they enter this or any high school, and you get them past spring break, there’s this huge metamorphosis,” Geiger said. “They don’t all become butterflies, but they all are changing in such a way.”