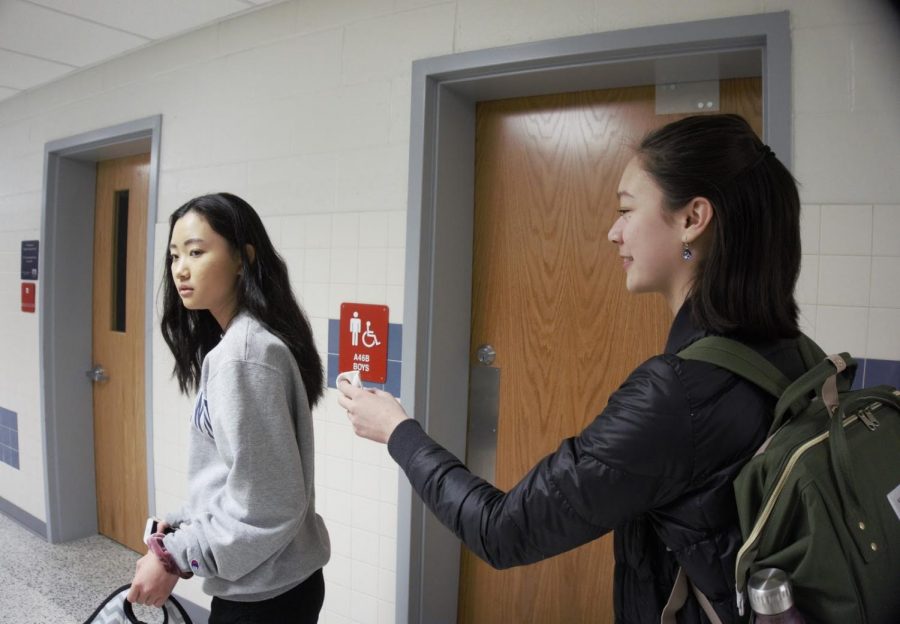 Sneaking up behind freshman Jeanie Qi, freshman Alyssa Rask attempts to "kill" her with a sock in the hallways during lunch.

Imagine the feeling of panic the moment class ends. Assassins lurk around every corner just waiting for a chance to kill. Whether or not someone is alive or dead could change by the time the next period starts.

The three Integrated Biology, English, and Technology (IBET) classes have always been required for every freshman at Jefferson. This has been the case for many years. However, this year, the freshmen have decided to have fun by playing assassins with the people in their IBET rotation.

Assassins is a game where the final goal is to be the last one standing. In each game, there is one moderator who does not actively participate but instead regulates the entire game. Each player is assigned a target that they need to kill. Once the initial target is “dead,” the player inherits their target’s target. Every player has an assassin as well as a target, and information is confidential, so anyone can be killed at any moment. Rules for killing are then created by the moderator unique to each game.

“Assassins is a fun way to bond with people, but I think it’s important we have good moderators,” freshman Sharvani Kondapally said.

“Trying not to give too many hints to people or exposing who has another player [as their target] is one of the hardest jobs of being the moderator,” moderator freshman Lily Walters said.

Although being moderator is a heavy burden, there are fun parts to it as well.

“I think it’s honestly hilarious to watch because you know who has who, and you see all of these alliances being formed, and you think to yourself, ‘Wow, that person’s gonna get backstabbed,’” Walters said.

The most common rules decided upon by moderators consist of killing your target by tapping them with a plastic spoon and killing your target without any witnesses. Another rule on no killing during class was added so people wouldn’t be distracted while learning.

Moderator freshman Sahil Gupta added rules such as only being able to kill your target if they are not within five feet of anyone else. This additional rule makes it harder to kill targets in order for the game to last longer.

Other games have rules such as tagging or smacking people with socks, only being able to kill your target if the textbook you carry is heavier than theirs, having immunity when holding a spoon, and immunity when singing songs.

Freshman Ramya Griddaluri played a round of assassins where the assassin was required to sneak up behind their target and whisper “you’re dead” in their ear.

“Assassins is a really fun game but some people, myself included, take it way too seriously,” Griddaluri said.

The length of assassins games among different rotations vary depending on the difficulty level and the aggressiveness of each rotation. There are some games lasting for only three days while others last for weeks.

“I’d say that the best part of assassins is just having fun with your rotation without involving stuff about grades or the IBET paper,” freshman Vandana Kalithkar said.