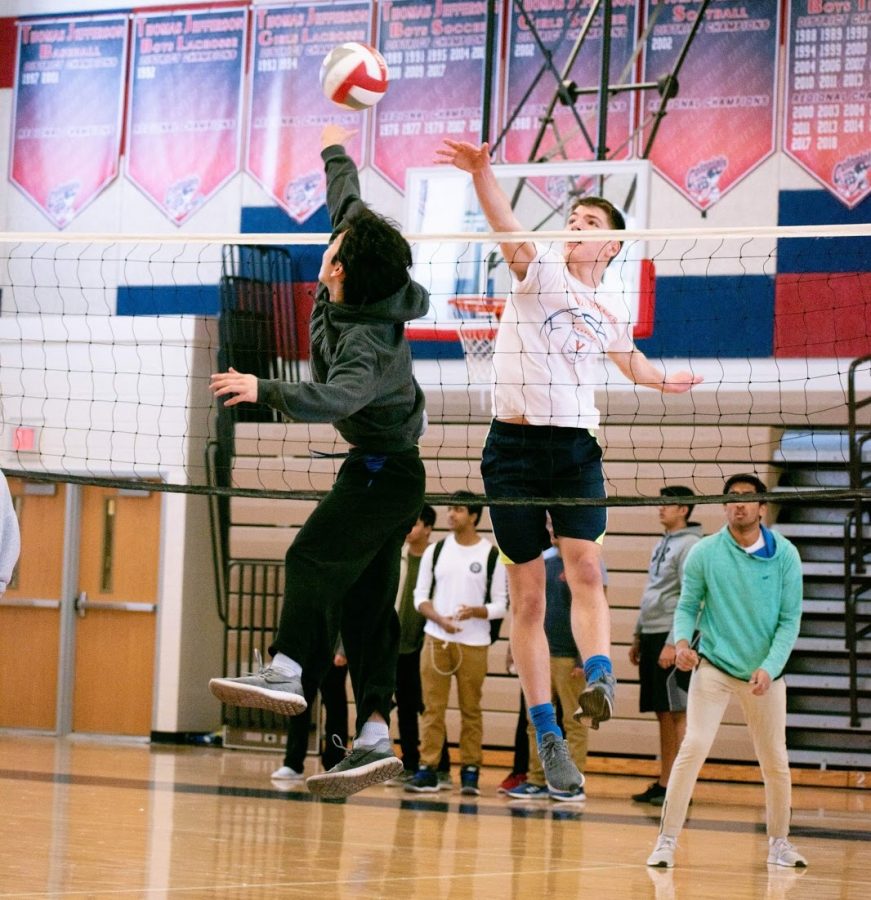 William Yao leaps up to return a serve during a high-intensity match of volleyball.

The gym fills with commotion as the first day of the March Mania volleyball tournament kicks off. Amidst all the noise and excitement, the cheers of teammates congratulating one another after a point well played can be heard above the rhythmic sounds of players serving, bumping, and setting the ball.

Among other events, the Student Government Association (SGA) has traditionally established a volleyball tournament in February intended to relieve the built-up stress many students experience from school. Over the course of two weeks, players and spectators could all savor in the participation or viewing of amateur volleyball and cheer on their friends and peers.

Yet, after much deliberation, SGA ultimately made the decision of not hosting this year’s event. Neil Kothari, the current president of SGA, attributes the choice to a lack of faculty sponsorship willing to supervise the volleyball games every day for two weeks. Throughout the year, SGA has struggled to schedule and host events due to shortcomings like this, leaving them unable to prepare the event.

“We did not believe it would be fair to Dr. Stickler, our sponsor to ask him to find another teacher to help him set up nets every block, and miss department meetings to supervise every volleyball game,” Kothari said. “Since the end of last year, SGA has been finding ways to add new events and preserve old traditions, despite a difficult sponsor situation beyond the control of the officers.”

Fortunately, SGA handled this by asking if the 2022 Class Council, a division of the Student Leadership Team, to acquire and sponsor the event. Under rigid time constraints, the freshman class council agreed to host the event and promptly began organization.

By modeling the event on past February Frenzy tournaments, the seven officers of 2022 Class Council were able to efficiently replicate it with relative ease. However, by the time the Activities Office and 2022 sponsor authorized the event, it would have no longer been accommodated in February, but in March, and therefore was renamed to “March Mania.”

“Since SGA could not sponsor the event anymore, one of our class council members talked to Neil, and he was happy to give the event to us. We thought it would be a great opportunity for us to continue this school tradition going, since many people said they really liked it,” Caroline Chen, the 2022 Class Council Vice President said.

As with past years, the level of participation was still strong. Hosting 43 teams from March 12 to March 22, the tournament was able to garner $860 in revenue from a $20 entrance fee per team. Though this is a marginal decline from the 46 teams that competed in the school-wide volleyball tournament in 2018, the enthusiasm for the event compensated for it.

“Even though the profits aren’t much, we’re more focused on bringing the TJ community together through this tournament. TJ is a very competitive environment and I think it’s nice for people to do something to de-stress and take their minds off of things like grades or colleges by participating in an event like this,” Leon Jia, the 2022 Class Council President said.

The class council members of 2022 were able to take up the torch from SGA and continuing to organize this appreciated annual tradition. However, there were essential lessons that 2022 class council took from this event, which will soon be applied in the upcoming months when preparing for future events including Freshman Lock-In.

“With a tradition as large-scaled as this volleyball tournament, we needed to work with all four grades, giving us more leadership experience, which will definitely help us in the future,” Chen said. “To organize the event, we made a Facebook group, allowing us to communicate between classes better. However, we should’ve advertised more frequently through Facebook or other means, such as posters. Yet, it’s still been a generally successful tournament so far.”

The event has received many accolades from players in the tournament thus far, with many praising it for how smoothly it has been running. Vikram Raghu, currently a sophomore at Jefferson, has been competing with the same friends and team in the tournament since last year. As a member of the United States National Boy’s Volleyball team, he relishes participating in a fun and low-stakes environment.

“This year, I perceived that the tournament was being administered much smoother in juxtaposition to last year. For example, the transitions between games have been going much better this year. In addition, the exceptional gym setup this year gave us much more space to play. I’m delighted that they continued this tradition and excited for what they’ll bring next year,” Raghu said.