Welcome to the Spanish Honor Society

The Spanish Honor Society has their induction ceremony for new members. 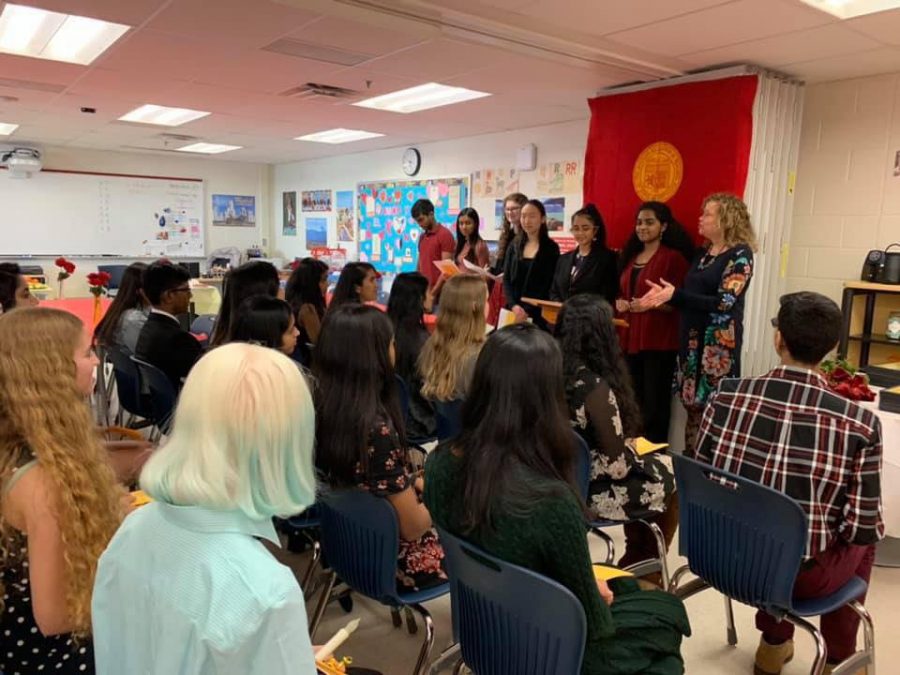 On March 6, the Spanish Honor Society of TJHSST welcomed the new members of their club during an induction ceremony. There, they sang Spanish songs, lit candles, and received plaques from Sra. Mateo and Sra. Gendive. Photo courtesy of Connie Ryu.

The ceiling lights dim and a candle illuminates. Around the room, more candles light up one by one as students pass the flame to the person next to them. The lighting of each candle represents each student’s official induction into the Spanish Honor Society.

It is no doubt language classes are an integral part of the Jefferson experience that teaches students a whole new way of communicating. However, Jefferson offers students a chance to delve deeper. Honor societies at Jefferson bring students into the culture of the languages they are learning. The Spanish Honor Society (SHS) is one of the student clubs at TJHSST centered around a language.

In SHS, students can meet other students learning Spanish and celebrate the Spanish culture while learning more about it. Furthermore, SHS is known for its many service projects to the community, particularly the Hispanic community. Throughout the years, they have participated in foreign student exchange programs, wrote to Spanish pen pals, run holiday gift packing events, and sent care packages to those in need. However, they are most known for the Bulería dance they run every year.

SHS recently welcomed their new members during an induction ceremony held on Wednesday, March 6. All the members, sophomores and above, had applied to join the club only a month prior.

“I joined the Spanish Honor Society because I’ve been looking to find volunteer experience where I can use my Spanish. I wanted to practice and expand my skills in the language since I don’t have any other opportunities outside of school. It’s a unique language used a lot in America, so I think I can really use it in the future,” sophomore Veronica Wong said.

Now, the students that applied were finally being inducted, with their parents there to see. During A block, the students prepared and practiced for the ceremony.

“The ceremony was definitely very formal as we actually had to practice sitting down and standing up from our seats. The arrangements were elegant, especially the lighting of the candles and the scented roses,” sophomore Pranav Mishra said.

When B block began, the ceremony commenced and the students participated in different traditional formalities and listened to speeches from the SHS officers and club leaders, Sra. Gendive and Sra. Mateo.

“The Induction Ceremony was pretty cool. We started out reciting the oath of SHS, did a candle lighting ceremony around the room, and listened to some Spanish music,” sophomore Eric Li said.

Then, the students got up in lines to receive their official plaques and a rose, marking the beginning of their membership in the Spanish Honor Society. In the end, everyone got to celebrate by eating snacks and slices of cake.

Now in the Spanish Honor Society, the new members can look forward to learning more about the unique Spanish culture and giving back to the community.