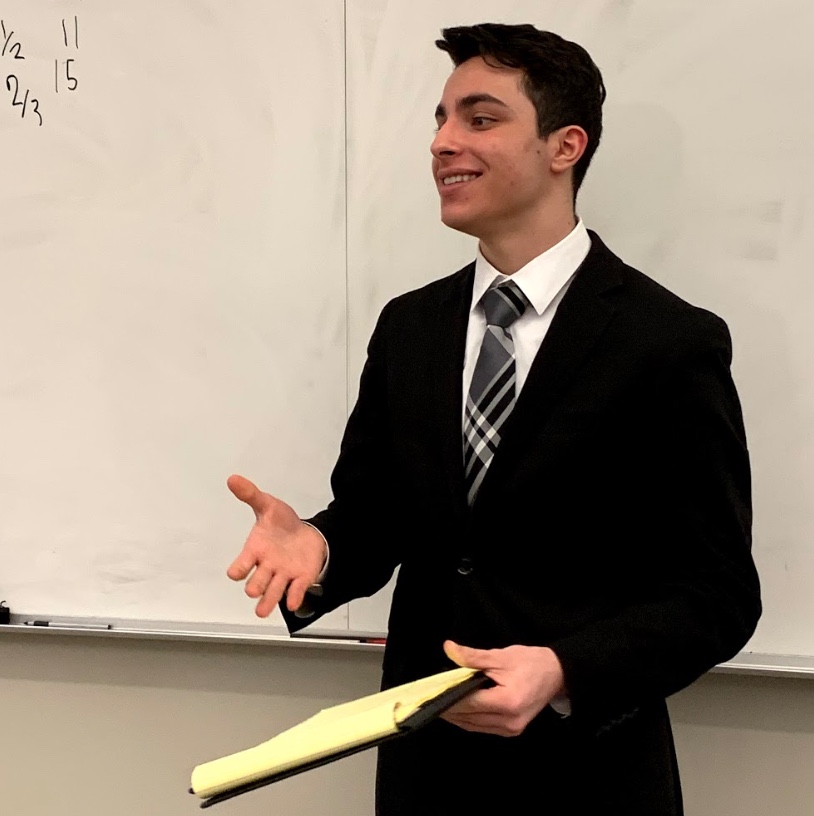 Jefferson’s Congressional Debate captain, Dany Matar, smiles at his audience as he finishes his first speech in the 2018-2019 Metrofinals competition.

Legal pad in hand, Dany Matar paces the chamber floor, passionately giving his speech as a gavel strikes wood behind him, reminding him that his three-minute passion-filled speech is soon coming to an end, just like his time here at Jefferson. As he goes, he leaves behind a debate club that has transformed from head to toe, yet whose core values and its ability to give its members a family and a newfound sense of confidence have never changed. As he walks back to his seat, two or three other people jump out of their seat, ready to give a speech of their own. Current club president, senior Dany Matar, shares what Congressional Debate is truly about.

“It’s about giving confidence to people that will eventually end up politicians, activists, artists, performers, history makers – people who believe that no matter what, they should speak up for the voiceless, fight fiercely for equality, and be the leaders of this next generation,” Matar said.

“Congressional debate can best be described as a culmination of the best things from every type of debate and MUN. You can use emotional appeal, but you have to do a lot of research,” Gupta said. “You can choose the side you’re speaking on, but you have to be well aware of how to refute other people’s points. Overall, it’s a type of debate that I think anyone, if they put enough effort into it, can succeed at.”

“The only reason [Congressional Debate] is not as “admirable” at TJ is because the club itself is relatively new,” Gupta said. “I also think people get confused about what it exactly is because it’s so different from parliamentary debate: the debate people primarily do in middle school.”

Although Congressional Debate is similar to other forms of debate, the use of rhetoric and the importance of delivery make the debate form different in that it is not just a listing of facts, but also an attempt to educate and persuade, to appeal to the humane side of others.

“The words you use matter, sure, but also the way you say them,” Matar said. “In my eyes the goal of the debate is not to be a good arguer, but to be persuasive and utilize your voice and demeanor in addition to your arguments to prove your point.”

While each club’s members become close-knit over time, Congressional Debate has a unique dynamic that has formed from countless eighth period meetings, lunch meetings, messenger chats, and late-night prepping.

“From what I’ve seen, I think that congressional debate has the strongest and closest-knit debate families out of all of the debates purely because of how much we care about each other,” Gupta said. “The fact that we have daily lunch meetings where we go every day simply to hang out and enjoy each other’s company goes to show how close we really are and how much we care for each other.”

Unlike other forms of debate, Congressional Debate is about the spirit of the debate, not about beating someone else. While different sides are debated, others are open to accepting different views.

“Instead of going head-to-head, as you would in other debate events, your success in Congressional Debate does not directly cause someone else’s detriment,” Matar said. “You don’t have to bring someone down to win like in other debate activities.”

From the day he walked in as a novice, the Congressional Debate’s ideal has never changed: to be a place where one can learn, have fun, and debate. That mentality has changed each and every Congressional Debater at their core, into a more open-minded person. Someone who is able to question their own views and others, one who can debate for the spirit of debate, not for a trophy or a score.

“I spent two years growing, learning, teaching, crying, fighting, finding myself, pouring my heart into each competition, and becoming the person that I was meant to be – something that I can assure you would not have happened without the support, teaching, and community of speech and debate,” Matar said.