Academy Award-Winning Documentary Free Solo is Captivating, Nerve-wracking, and Thoughtful to the Core 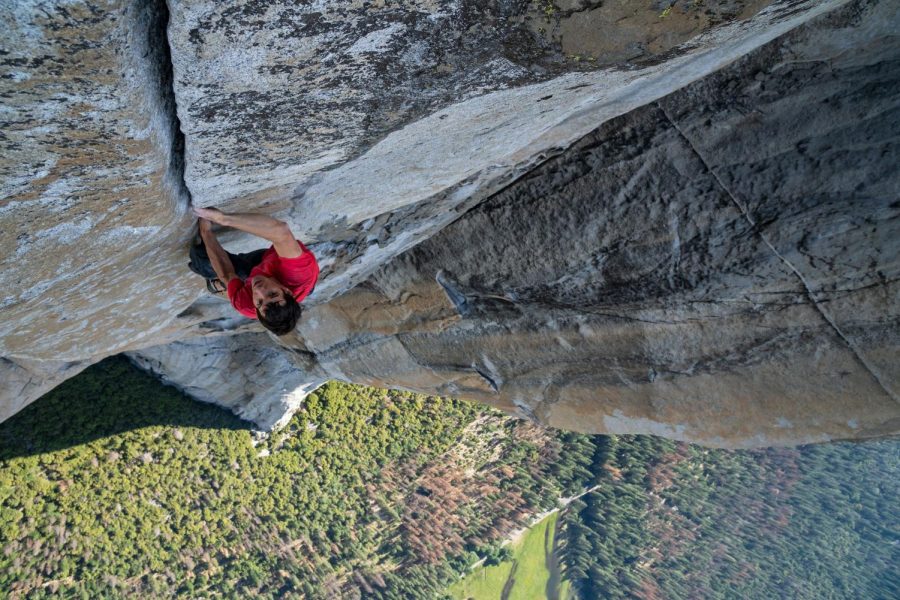 Ascending up El Capitan, Alex Honnold uses no ropes for support. Free Solo captures his preparation for this climb as well as the climb itself.

There were certain points in the film where I felt like I needed a rope harnessed to my waist just to get through.

Presented with death defying drops on my television screen, I felt the need to turn my head away and get a drink of water. But I simply couldn’t. Trapped under Free Solo’s captivating nature, I couldn’t stop watching.

Free Solo was recently given the Academy Award for Best Documentary Feature, and from the likes of it, it absolutely deserved the honor. The movie chronicles Alex Honnold’s journey towards climbing Yosemite’s El Capitan without any ropes, a practice known as free soloing. The documentary will keep you fascinated from the beginning to the end of it’s 1 hour and 29 min runtime.

Honnold’s climb up El Capitan is, of course, the backbone of the movie, and the crew doesn’t disappoint in making sure that we relive his preparation climbs as well as the actual ascent in vivid detail. Closeups on Honnold’s fingers and toes crunching into footholds in combination with his heavy yet controlled breathing and the sound of his chalked fingers rubbing against the granite accentuate the precarious nature of Honnold’s attempt. The quality of the cinematography diminishes during Honnold’s actual ascent as the team opts to use remote cameras at difficult pitches in order to keep from distracting Honnold, but I, nonetheless, remained on the edge of my seat for the entire free solo ascent.

But Free Solo is far more than a great achievement filmed in vivid detail. Rather, directors Elizabeth Chai Vasarhelyi and Jimmy Chin elevate the film through exploring Honnold as an individual and the motivations fueling his climb. Most intriguing is Honnold’s view of risk; throughout the film Honnold describes free soloing as a low risk but high consequence activity, and Vasarhelyi and Chin’s efforts to delve into further dilemmas such as these make watching Free Solo a more worthwhile experience.

We see not only Honnold’s dilemmas, but those of his loved ones, notably Tommy Caldwell, Honnold’s climbing buddy, and Sanni McCandless, Honnold’s girlfriend. Caldwell and McCandless do their best to avoid discouraging Honnold while dealing with the stress of his possible death, and their struggles anchor the strongest scenes of the movie. McCandless, in particular, carries the film — Honnold may be the subject of Free Solo, but his girlfriend is the secret star.

Free Solo is ultimately a must see and is now available digitally as well as on DVD.