Jefferson guitarists discuss their appreciation towards the beauty of their instrument 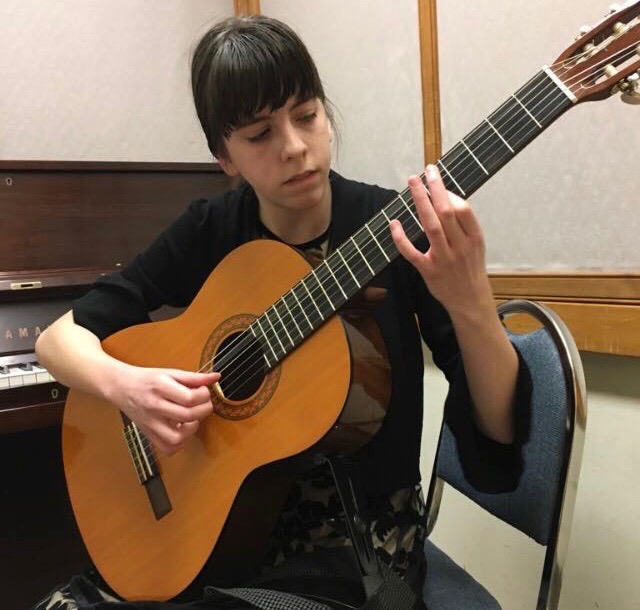 Freshman Elizabeth Brown avidly practices classical guitar. Many students at Jefferson have been involved with musical instruments, and guitar is no exception.

Propped against the wall in the chorus room, guitars are popular instruments for not only the music department, but also other students at Jefferson. Due to its tonal variation and use within many genres, guitar has been an appealing instrument for both young and old musicians.

Most students at Jefferson have played an instrument from a young age, guitar being one of them. Inspiration from friends and family along with an appreciation towards certain genres may sometimes be a common reason for students to begin playing.

“My favorite music is punk and rock which is very heavily guitar based,” senior guitarist Sukriti Dhingra said. “I’ve always loved the sound, whether it’s a solo or just background rhythm, and it honestly just looks so cool when you’re playing it. A good guitar riff can really make or break a song.”

Many of these guitar hobbyists have been playing for several years and can provide various examples of benefits that come with playing guitar. This includes increased work ethic from playing an instrument.

“I think that all music is very important and it’s good to be involved with any instrument just because it helps build up a work ethic and it gives you lots of skill that test lots of different parts of you brain,” freshman Elizabeth Brown said.

Freedom of expression is another benefit that comes with playing guitar due to its versatility.

“Unlike violin or a wind instrument, you can easily express yourself with as few as four chords and a little fingerpicking, which helps you quickly add new songs to your repertoire,” junior Grace Weisman-Fleischer said.

Despite these benefits, trying to balance guitar playing and the heavy workload that comes with attending Jefferson does pose a challenge to many students. Sophomore Richik Haldar recalls the initial difficulty of finding time to practice.

“I remember freshman year I had almost no time to play guitar since middle school,” Haldar said.

The workload may conflict with time available for practicing; however when students find time, playing guitar can serve as an escape for students from the stress of schoolwork and allows them to enjoy their own music.

Because it builds confidence, musical skill and can accomodate any genre, students may enjoy the guitar’s qualities and benefits.

“It’s a very versatile instrument,” Brown said. “You can play classical, you can play spanish, acoustic, country, rock and roll, you can do whatever you want with the instrument.”