26th round of Japanese exchange students come to Jefferson 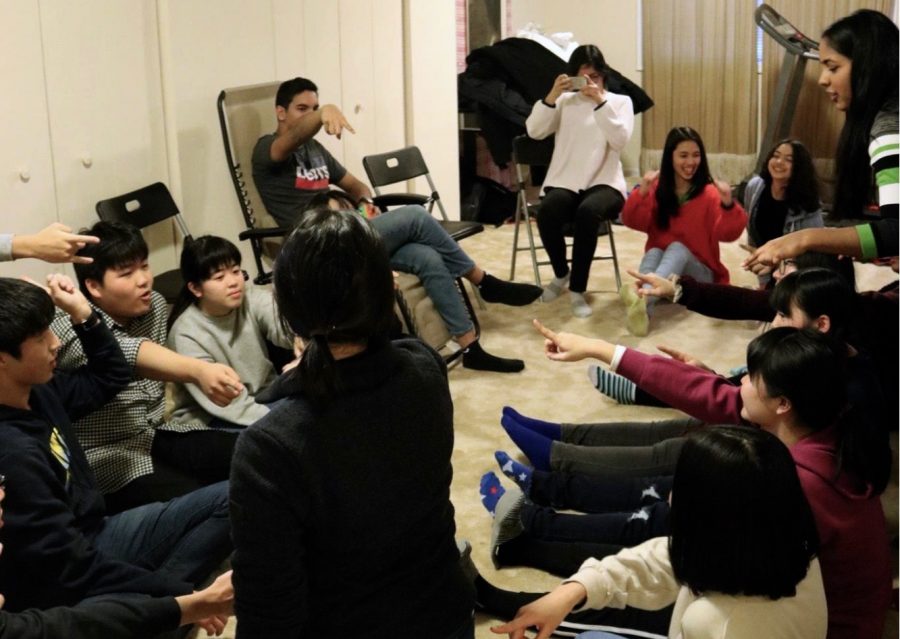 During the welcome party, Chiben Gakuen students played Mafia as an icebreaker with Jefferson students.

For the annual two-week homestay between Jefferson and Chiben Gakuen Wakayama, twelve Japanese exchange students arrived at Reagan National Airport on Mar. 2. For 26 years and counting, the program, one of Jefferson’s longest-running exchange programs, has fostered friendships between many Japanese and American students.

The exchange involves planned activities throughout the homestay that engage Japanese students in American culture and allow them to bond with Jefferson students. In addition, exchange students accompany their respective host students to their classes and/or eighth-period activities.

“[Going to classes in Jefferson] was fun, although I fell asleep [during one class] because I couldn’t understand anything that the teacher said,” Chiben Gakuen first-year Juri Nakaima said.

Although some students had participated in the exchange program before, for others, it was their first time hosting or doing an exchange program abroad. Naturally, a few students were nervous about adjusting to culture shock.

“I’ve traveled abroad before,” Chiben Gakuen first-year Kako Okada said, “but I was nervous before the homestay. Japanese culture and American culture are kind of different, so [the cultural differences] could create tension [between me and my host family].”

Despite the cultural differences, some students managed to adjust within the first few days. Though communication remains a challenge, it has not stopped the Jefferson and Chiben students from slowly forming friendships between each other.

“[Now], it’s actually pretty good. [My host student] plays tennis so we actually went out and played a few games and then some video games. [We also] watched some movies, we took him out to the movies on Saturday, just stuff like that,” sophomore Vishal Kanigicherla said. “We’ve gone past that awkward not-so-sure-what-to-say phase and we’ve moved on to getting to know each other more and getting to interact with each other more.”

With the program just beginning, Jefferson and Chiben students alike anticipate what will happen in the next few days.

“I’m looking forward to the Thanksgiving party. I do really want to see what their take is on the kind of food that we have,” Kanigicherla said.