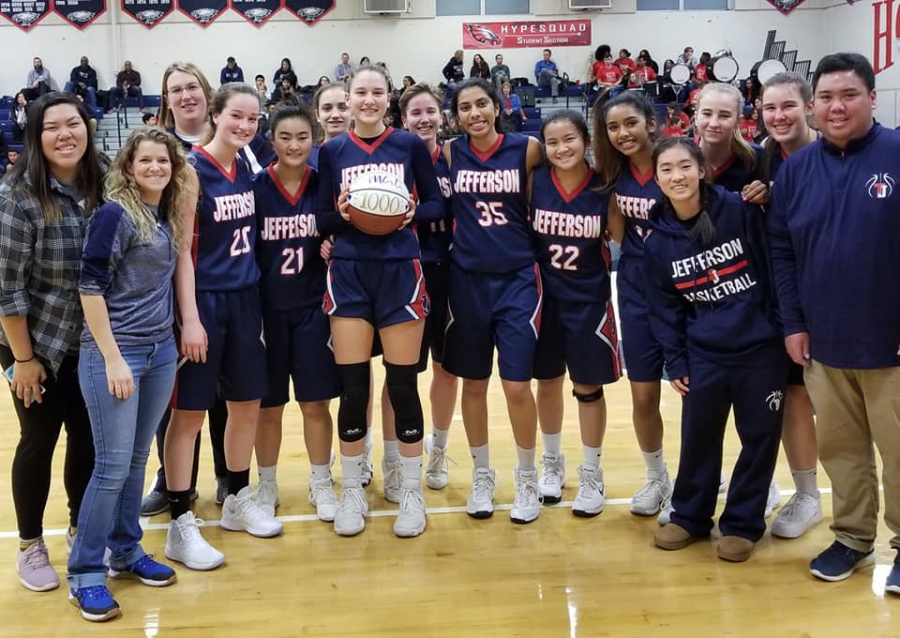 The Girls Varsity basketball team has reached new heights. From gaining a highest record of the wins in decades (17-9) to playing against an undefeated team, the Freedom Eagles. The success of the team can be largely supported by not only the players’ individual skills, but also the team dynamic.

“We were all so close as a team, all of us were friends and we had sleepovers and hung out outside practice and games,” junior Abby Kim, a guard on the team, said. “During practices, we run, go over different defenses and offensive plays and the other teams scouting report.”

With long practices almost 6 days a week, it’s no wonder the team is so close on and off the court. Their traditions and friendship allows them not only to come together as a team, but also as a family.

“Before every game, we always eat food as a team,” sophomore Trisha Rayan said.  “To get ready for the game we stretch together before, and we have this warm-up routine that we do on the court before the game starts.”

Balancing the workload of Jefferson and the long hours of practice is a hard task. Despite this, the new players this year have found the experience exciting. Freshman Erin Brodnik, who plays post on the team, remarks on playing on varsity her first year.

“It’s kind of stressful but it gives me a sense of accomplishment knowing that I’m playing with such a high level of competition,” Brodnik said.

The team managed to qualify for Districts, but the team lost 46-39 to the Edison Eagles on Feb. 15.

“It was a really tough loss because it was a close game and we were ahead in the first half,” senior Cassidy Trinh, who alternates between point guard and guard, said. “For us seniors, it was especially emotional to have our season come to an end because we really wanted to make it to states.”

Although the season ended early for the team, a new year brings new possibilities and the players graduating this year have high hopes for the 2020 team.

“This year five of us are graduating so the team dynamic is going to change a lot next year,” Trinh said. “But I think that the team still has some amazing players left who have the potential to keep up the success of the team if they’re able to step up and take on more responsibility.”