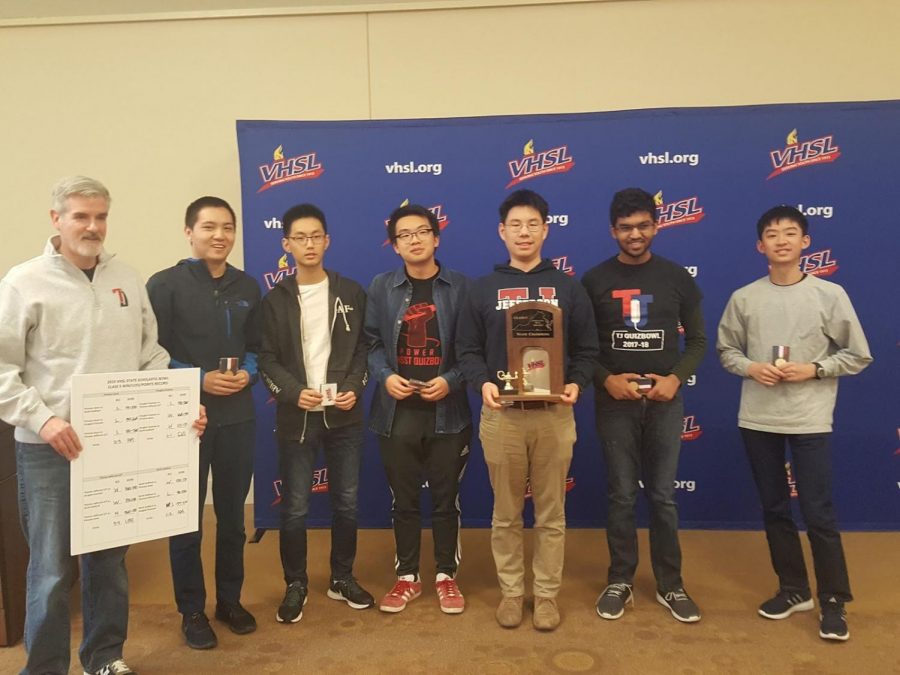 The Jefferson Scholastic Bowl Team won first place at the State Championships on Feb. 23 at William & Mary, , continuing their winning streak for the fourth year in a row. The team, with Fred Zhang, James Kuang, Ben Xu, William Wang, Prithvi Nathan, and Joshua Liang scored a total of 1,050 points.

The team, practicing every week during 8th periods, was positive that they could bring home the States Championships this year.

“We won the last three years in a row, and this year we had been preparing very well,” Fred Zhang, the captain of the team said. “Because we had played together for the past three years, my teammates and I had good chemistry.”

Zhang actually started playing competitively before high school, and when he joined the team at Jefferson, he improved quickly, becoming one of the top members of the team.

“I started playing Quizbowl in 8th grade, which led to me joining the TJ team when I started 9th grade. I was encouraged to continue improving by the upperclassmen in the club who mentored me,” Zhang said. “I was only a substitute when we won in 2016, so I was really happy [to] be the captain of the winning team this year.”

Along with taking home first place, there were other memorable things that happened for the Jefferson team this year.

“This year, we actually tied the state record for the most points scored. We needed 14 of the last 15 questions and ended up getting the exact amount. I had missed out on being named to the All-State team last year, so getting there this year was also a really rewarding experience.” Zhang said. “I think winning states for four years in a row is something few teams or individuals have done and I’m really proud to be part of something like that.”

They now have their focus on the National Scholastic Bowl Championships, which will be held in Atlanta, Georgia this May.

“Our goal is to do well at Nationals this year, which we’ve been working towards this whole season” Zhang said.