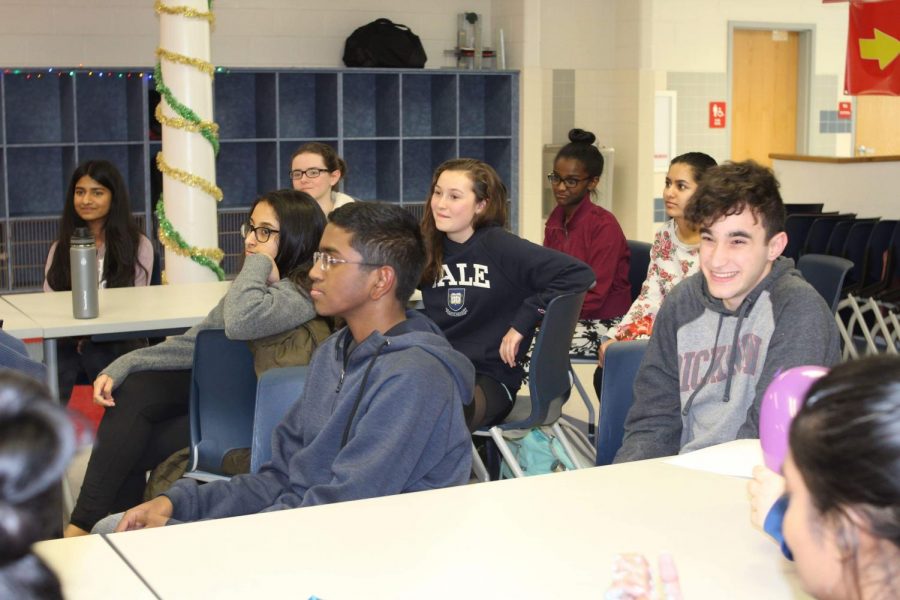 The TJ Minds Matter club held a reveal party for their Kindness Pizza Extravaganza during 8B on March 27.

As part of the Kindness Pizza Extravaganza, students signed up to take part in a kindness exchange in which they were assigned a random person for which they had to anonymously perform a random act of kindness.

“We do school-wide events during eight period once a month, and for February we wanted to spread some love around Valentine’s Day,” senior Robert Greene said.

Planning for the event was set in motion when sophomore Gurleen Kaur proposed the idea of having Jefferson students do something nice for a stranger at a weekly TJ Minds Matter (TJMM) meeting.

“Basically, I was joking about how it would be cool to set up a blind dating type of thing, but I really did want to do something where people would have to do something nice for a stranger,” Kaur said. “So, I talked to Ms. Armstrong and the other members about it at our weekly TJMM meeting, and she told us about how they do a random act of kindness exchange in semester psych, so we decided to implement that school wide, and also have pizza for fun and as an incentive.”

From there, the club assigned roles to each member in preparation for the process using a Google form to keep track of the process.

“The Minds Matter team all handled different aspects of the event – publicizing it, creating matches, communicating with participants, decorating, and of course, purchasing pizza,” Greene said. “Overall, a lot of planning went into the event, but we divided it up and everyone put in a lot of effort.”

Approximately 20 students attended the eighth period event, although many more participated in the exchange of kindness.

“I participated in the event because we all have all those bad days and I wanted to make someone’s day better, no matter how little of a contribution I made. I think these events are necessary in places like TJ, because it’s a place filled with stress, and people often feel down. There’s nothing better than ending a long day with an act of kindness in my opinion,” freshman Meghana Gopannagari said. As part of her random act of kindness, Gopannagari gave a box of chocolates.

Although the TJMM team ultimately considered the Kindness Pizza Extravaganza to be a success, as with most first-time events, a number of difficulties were nonetheless apparent.

“In later years we may try to help people get to know their matches better by including a spot on the form where people can list their interests or activities. That way it’ll be easier for matches to tailor the random act of kindness to the recipient, and we’ll be more effective in our goal of bringing the TJ community together,” Greene said.

In coming years, TJMM hopes to hold the event again, to not just improve this iteration but to continue to have a positive impact on the Jefferson community’s mental health.

“TJMM seeks to spread positivity throughout the school and promote mental wellness. A huge part of that is promoting kindness and compassion. It’s also important to note that one of the biggest aspects of mental health related issues is that anyone could be impacted by a mental illness or struggling with their overall well-being,” Kaur said. “So part of promoting mental wellness is being kind to everyone, because for all we know it, it just might help better any struggles someone may be having. That’s what we hoped to spread through the kindness extravaganza.”

Pictures of the event can be found here.