Freshman and sophomores unite and party all night 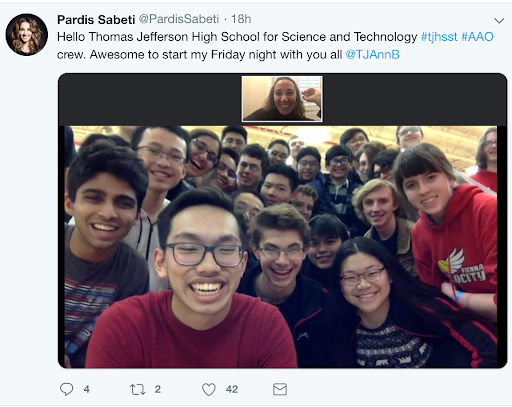 At Jefferson's first Winter Bash, a night-long party with the freshman and sophomores on Feb. 22, students got to video call Pardis Sabeti for the first time, asking her questions and getting to know the Against All Odds host better.

In times like Homecoming, the freshmen and sophomores are used to competing against each other. However, the night of Feb. 22 was an exception. The Class Councils of 2021 and 2022 collaborated for the first time to hold Jefferson’s first Winter Bash, a night-long party throughout the school that lasted from 4:30 to 9 PM.

“The freshmen class council were all newly elected, and since all of them had only experience from organizing Homecoming, we wanted to shed light and introduce them to more substantial events. The Winter Bash would assist the freshmen in organizing Lock In as it was a strong foot in the door on how to effectively plan, organize, and execute such a large scaled event,” class of 2021 senator Sean Nguyen said.

Many of the activities in the Winter Bash were similar to ones in the Freshman Lock In, giving freshman a taste of what it would be like and sophomores a chance to relive the experience. There was a 3v3 basketball tournament, a Wii console set up in the Math Commons, an open mic show in the Auditorium, a Trivia tournament, and an Escape Room.

One highlight of the bash was the video call with Pardis Sabeti. Students got to FaceTime her on the big screen in Gym 1, asking her questions as she gave advice to the students and talked about how she got to where she is today.

“It was like meeting an idol in almost real life. We normally see her as a teacher who carried us through Research Stats, but to see her out of that climate was really fun. I enjoyed hearing what she had to say about our questions, which were sometimes weird. I knew she was going to be a cool person before, but after I knew that for a fact,” said freshman and Class Treasurer Bhaswith Suresh.

In addition to all the fun events and the chance to see a celebrity in the Jefferson community, students could eat to their heart’s content at Gandhi Commons, where snacks and a cookie decorating station was set up. About 40 pizzas were served that night, with only one box left over.

Overall, the Winter Bash gave students an opportunity to de-stress, relax, spend quality time with their friends, and even meet Pardis Sabeti. The freshman and sophomore Class Council hope to collaborate and organize more events like this in the future.