Why PewDiePie vs. T-Series Does Not Create Hate 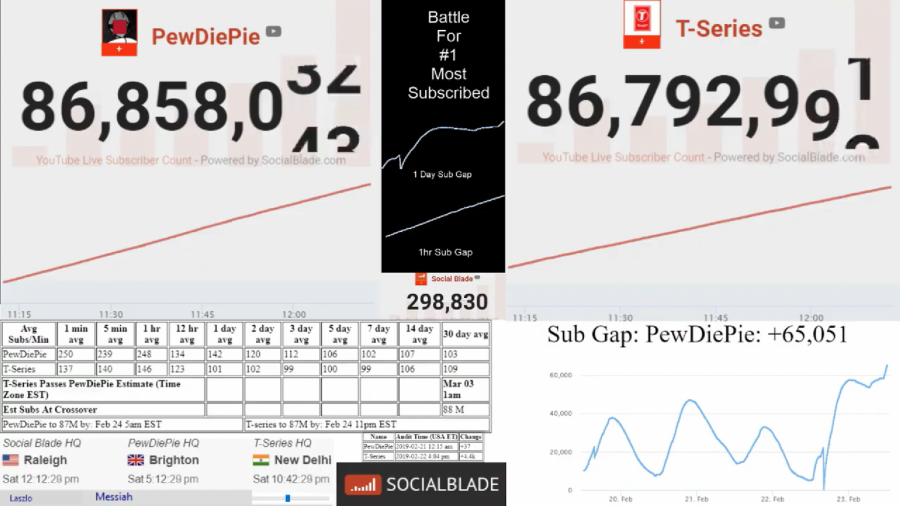 Felix Kjelberg, who is commonly known as PewDiePie, is a professional YouTuber famous for his videos covering various memes and games. Currently, he has almost 87 million subscribers, making his channel the most subscribed on YouTube. He has held this title for several years, but it is now threatened by T-Series, an Indian music channel which has risen to become the second most subscribed channel.

The competition of PewDiePie and T-Series to become the most popular channel has become heated in recent months, as the difference in their subscriber counts has dipped below 10,000. Both channels have seen a huge increase in subscribers, with PewDiePie gaining about 4.3 million monthly. Unfortunately, the race has provoked many people to make hateful comments against T-Series, as PewDiePie encourages his fans to help him stay the most subscribed YouTuber. However, despite concerns that this is creating racism and toxicity, the battle is mostly friendly competition.

PewDiePie himself discouraged racist comments against India. “Sometimes in these comments, you see comments like ‘f-ck Indians,’ […] just really distasteful, unnecessary comments,” he said. “And I obviously make Indian jokes and stuff like that, but I do that of all countries, and this is not what I’m about.” PewDiePie said. He started a fundraiser for Indian charity Child Rights and You, apparently sending enough people to make the site crash. PewDiePie has done a lot to keep his fan base from becoming toxic and racist.

T-Series has expressed frustration that the subscriber battle has become a big deal, saying they are not interesting in beating PewDiePie. “I am really not bothered about this race. I don’t even know why PewDiePie is taking this so seriously. He’s getting his people to push him, promote him. We are not competing with him.” Bhushan Kumar, the chairman and managing director of T-Series, said. Although many fans are taking the race too far with extreme measures like hacking into printers, the race seems to be harmless fun. Many Jefferson students united to try and keep PewDiePie ahead of T-Series, allowing them to bond over a shared interest. Facebook and other online venues were flooded with messages encouraging students to subscribe to PewDiePie and unsubscribe from T-Series.  However, none of the messages were toxic or insulting to supporters of T-Series.

“I’m getting more attention now than I’ll probably ever get,” Kjellberg said. “So why not just take that fact and redirect it to something more positive, and show that this fanbase […] can do something positive as well, because I know we can. No more ‘f-ck India.’ Instead, let’s help India.”