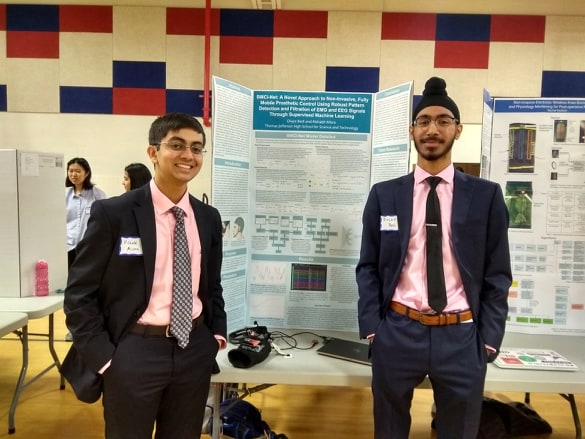 Rishabh Misra(left) and Divjot Bedi(right) display their research on their prosthetic limb at the Science and Engineering Fair on Feb. 9.

After months of preparation, Jefferson students showcased their research projects at the Science and Engineering fair on Feb. 9. Students showcased research from a variety of categories including Animal Sciences, Biomedical and Health Sciences, Systems Software, and Embedded Systems. From spending 8th periods in the JUMP lab to integrating biological principles with computer science, the science fair featured a diverse range of projects that could have real-world implications in the field of science. Juniors Divjot Bedi and Rishabh Misra qualified for regionals through their work on a prosthetic limb with a brain-muscle-computer interface while senior Korrina Gidwani qualified with research on nerve connections in crayfish.

“We started researching since the beginning of the school year and started off by reading recent publications in brain-computer interface control. After our materials arrived we were able to begin our design phase, and afterwards began data collection,” Bedi said. “Overall, our project took around 5 months.”

The duo made a prosthetic limb that moved in response to electrical impulses in certain regions of the brain. Using an EEG headset to monitor neural activity in the brain and leveraging information received from EMG sensors, Bedi and Misra were able to create a functional prosthetic arm.

“We developed a novel method to improve prosthetic control by using both electroencephalogram (EEG) and electromyography (EMG) sensors in tandem. In order to improve the accuracy of our new model, termed BMCI-Net, we applied state-of-the-art computational approaches,” Bedi said.

Along with using knowledge from past studies and also from classes they took in school, Bedi and Misra gained valuable lessons from the challenges they faced.

“[A] challenge we had was figuring out how to get EEG and EMG data to combine in an efficient manner and put it into python so we could parse it and perform the things we needed to with it,” Misra said. “However, we were able to overcome this by writing a custom python script of our own based on what we have learned in our individual studies and research and that type of novel program was interesting and eye-opening to us.”

Other students showed that computer techniques can be used not only to imitate the motion of a limb, but also to detect disease on a human body. Junior Sarah Luthra created a program that could detect melanoma based off of images of a patient’s skin.

“My project was [on] detecting melanoma using dermoscopy images and a machine learning CNN algorithm on a handheld smartphone device. It was about creating a program that would take in an image input and reliably detect the presence of melanoma on a skin lesion,” Luthra said.

One of the main objectives of creating an algorithm is getting it to function as fast and efficiently as possible. Luthra made sure that her program ran smoothly.

“It took a long time to run my program each time since I was feeding it 100,000 images of lesions to test it, so it did take a while to run and test initially. However, by the end, I was able to significantly reduce the runtime,” Luthra said.

While some students conducted research as part of the JUMP lab, Senior Korrina Gidwani streamlined the regeneration of crayfishes’ severed nerve cords using retinoic acid and measured the resulting neuronal growth and electrical differences throughout the nerve by using an electrophysiology setup she created.

Gidwani found that her method of measurement was initially ineffective. With the guidance of her lab director, she was able to find a more reliable way to collect data.

“When I started research in the Neuroscience Lab, I found out that the data collection methods I was planning to use have generated unreliable data in the past,” Gidwani said. “With the help of my lab director, Mr. Hannum, I assembled an electrophysiology setup, which ended up working successfully. I learned that it’s important to think creatively and research extensively when solving scientific problems.”

While some students focused on the biological and medical aspect of science, the science fair housed projects relating to web app development. For example, sisters Sneha and Shiela Iyer made an application that consisted of games to help children with learning disabilities.

“Our project was an app called Bright Minds, that helps children cope with these disabilities and prepares them for the future,” Iyer said. “The app’s many games aim to alleviate the pressures of learning disabilities and help with cognitive processes used in speaking, reading, spelling, and writing. We decided to create multiple games on our app relating to dysgraphia (impaired ability to write), dyscalculia (difficulty with mathematics), dyslexia (trouble with reading comprehension), and dyspraxia (lack of coordination).

The two wanted to ease the learning process for children as well as their parents by providing focused advice through their app.

“We want to have an impact on children’s abilities to adapt and successfully live with their disabilities. Bright Minds provides advice and resources based on data analysis, that are specifically aimed to educate parents in order to decrease the obstacles that come with learning disorders,” Iyer said.

Overall, the science fair provided students with an opportunity to showcase their work in areas that they care about and get rewarded for it. The groups that got first place in their respective category, including Bedi, Misra, and Gidwani, will now advance onto the Fairfax regionals science fair.

“It felt rewarding to know that the judges saw potential in my project and its applications to the real world,” Gidwani said.