How appropriate is asking for a grade bump? 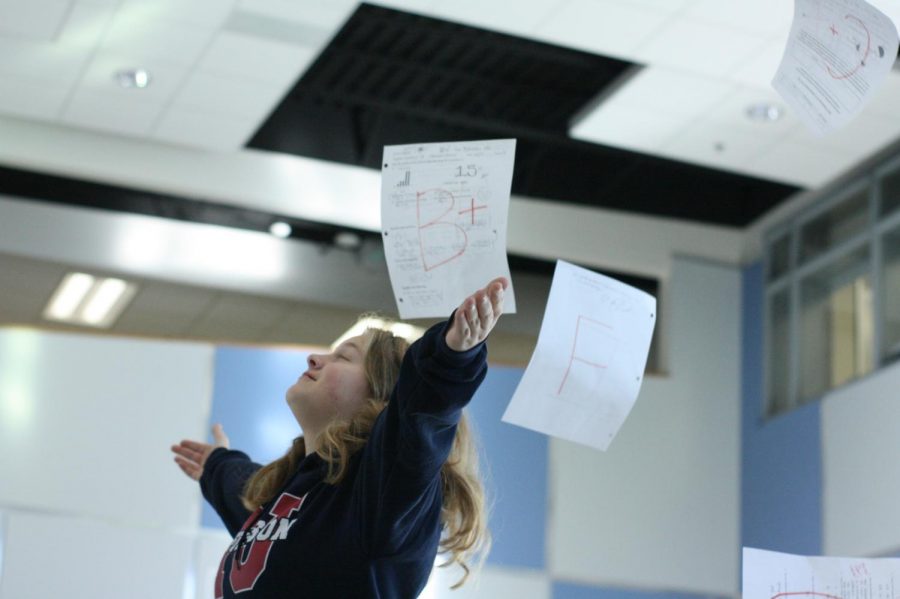 Freshman, Claire Wilson stands in Nobel Commons as she is showered with graded papers. Grades are an integral part of student life at Jefferson, but sometimes they don’t always go our way (as seen in the picture). In those cases, is it alright to ask for a grade bump?

Allow me to put forth a scenario that you or one of your friends have probably experienced. It’s the end of the semester, and after a lot of hard work and practice, you’ve finally brought your grade in a really difficult class up to 92.4%. Just 0.1% more and you can take the A- to an A. You’re so close, yet so far.

Now you are faced with a tough decision. Do you let it go and try harder next time, or do you put yourself through the uncomfortable process of asking your teacher for some extra points in the grade book?

Before evaluating the merits and difficulties associated with asking for grade bumps, it is first important to understand why students ask for them.

“I asked for a grade bump in my AP US History class last year, and it was for five points in one quarter to bump my A- to an A,” senior Arsh Ganjoo said.  “My teacher ended up giving me a 105/100 on my final project.”

In a survey conducted by tjTODAY, it was found that out of the 10 respondents, seven were in support of the practice of asking for grade bumps.

“I support asking for a grade bump if the person asking has put a lot of effort into improving their grade prior to asking for a bump, and if the bump they’re asking for isn’t too big,” senior Rayyan Khan said.

Especially at a school as rigorous as Jefferson, sometimes a few points can go a long way. However, the practice of asking for a grade bump is looked down upon by some teachers and students alike.

“I don’t support grade bumps,” sophomore Krish Patel said. “As much as people think they ‘need it, it’s not that important, and it just makes you look like [somone] who cares about nothing but grades.”

Asking for grade bumps can be an uncomfortable task. With that being said, it comes as no surprise that students are more willing to ask some teachers for grade bumps over others.

Asking for grade bumps can sometimes be a daunting experience, as doing so may make the student look bad.

“It can be seen as [though someone is] only doing [a] class for the grade and not to learn anything,” Ganjoo said. “[Just] because a kid cares about his grades doesn’t mean he should be looked down upon.”

Teachers vary their position on grade bumps so there isn’t always a clear answer as to who will accept the request for a grade bump. It ultimately is up to the teacher.

“I think one of the things that may be career limiting for TJ students is them not is not knowing how to negotiate, not being willing to stand up for themselves, not being able to ask for what they need,” humanities teacher Jay Wickliff said. “What I’m trying to do is encourage people to speak up and to debate and to have confidence in their ability to discuss and negotiate and do those sorts of things.”

The validity of a grade bump often depends on the subject. Students may be more successful in getting grade bumps in classes which have subjective material like writing, as opposed to objective grades like math. Teaching style also factors in.

“I teach differently than most other teachers. Because they teach so well, I need to find other ways to add value. I try to teach to develop those skills that I think are in short supply [at TJ],” Wickliff said. “I grade differently, [so] it makes perfect sense in my environment.”