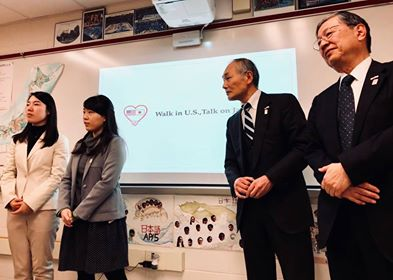 Standing at the front of the Japanese 1 class, Megumi Inoue, Yui Ozaki, Fumi Ota, and Ken Shimanouchi (from left to right) answer questions about US-Japan relations.

Shimanouchi, a former ambassador to Brazil and Spain, summarized his experiences with Japan, then segued into his presentation’s main idea: Japan’s declining population compared to other developed countries, which has been a concern for a long time. Shimanouchi then proposed alternate solutions for this problem that had already begun on a small scale, such as robotic labor and artificial intelligence to replace the aging workforce.

“[After the presentations, I asked] with an aging population and a shrinking labor force, how will new immigrants adjust to Japanese culture, which is not diverse?” senior Geetanjali Gandhe said. “[Mr. Shimanouchi commented that] the new generation was more open. [His approach was] very nice, and it was a problem that they were aware of.”

Ota, a retired Japan Self-Defense Forces Navy Admiral, gave a presentation about the strength of US-Japan military relations and how they could be used to aid in international security, particularly in defense against intercontinental ballistic missiles from North Korea. He talked in detail about radar detection systems in Japan, particularly the AEGIS systems in Akita and Yamaguchi, and how those two systems could intercept missiles headed towards Hawaii and Guam, respectively. He concluded his presentation with a brief outlook on the strength of Japan’s soft power compared to other countries.

“The US is called a low context culture [because] many of you probably use explicit, verbal, and simple ways of verbal communication,” Inoue said. “On the other hand, Japan and other countries are high context cultures because they have implicit, non-verbal, and layered conversations.”

Lastly, Ozaki, a junior at Keio University majoring in political science, presented the catalyst for her deep involvement in US-Japan relations. While she was an eighth-grader at Longfellow Middle School, the Tohoku Earthquake and Fukushima Daiichi nuclear meltdown occurred. She then pursued US-Japan relations to repay her classmates’ kindness in creating bake sales and dances to raise money for the victims of the Mar. 11 earthquake and subsequent nuclear disaster.

“I was very touched by [my classmates’] kindness, so I decided to pay it forward [through pursuing political science],” Ozaki said.

While and after these presentations occurred, Japanese 1 students, as well as visiting students from other Japanese levels, asked many questions ranging from Japanese business culture to topics outside the presentation such as Japanese urban life vs. the Japanese countryside. The presenters were surprised at how in-depth the students’ questions were and the breadth of the students’ knowledge about social issues tackling Japan.

“It was surprising how some of the students’ knowledge was so in-depth,” Shimanouchi said. “Some of them knew [about] the Art of War, the missiles…”

“This US-Japan friendship was never built in a day,” Ozaki said. “It wasn’t only sustained by the prime minister and the president. It was sustained by those who care about Japan and are interested in Japan. These relationships combined together make a firm friendship. Let’s pay it forward to build a stronger friendship together.”