Gaming culture, despite its changes, thrives amongst multiple generations at Jefferson 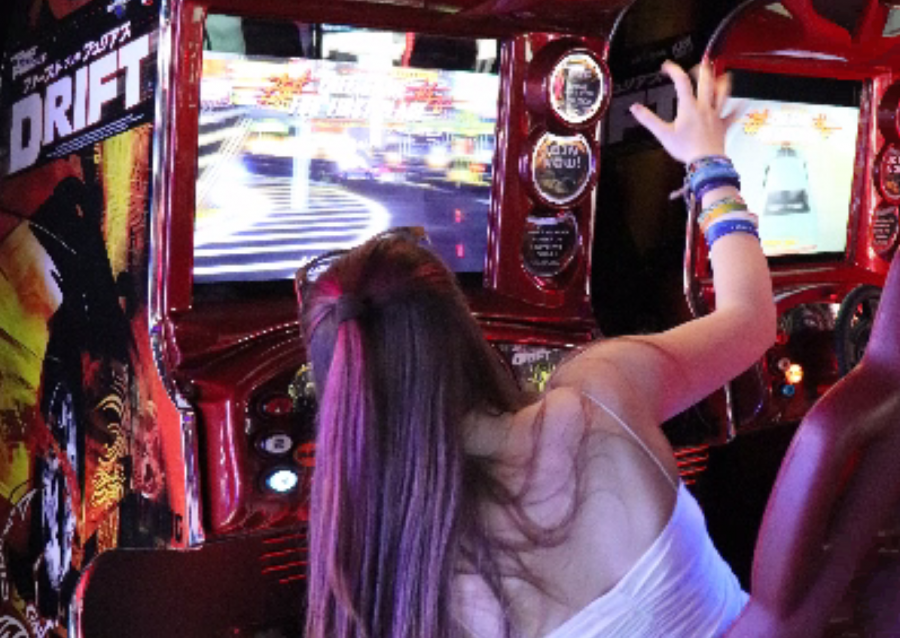 Start on the hallway between the Franklin Commons and the College and Career Center and turn the corner to find a projection of Mario Kart on the wall.

Take ten steps forward and find a group of four students huddling in front of the library with the Brawl Stars app open on their phones.

Take the first staircase down and turn to the left. There, in the midst of foreign language classes, two students hold Nintendo Switches to play the latest Super Smash Brawl game on a small monitor placed inside of a cubby.

This is the culture of gaming at Jefferson.
Popularity
Over 150 million people play video games in the US alone according to the Entertainment Software Association. At Jefferson, students and teachers alike can be found playing everything from console to mobile games both at home and when they get a spare minute at school.

The prevalence of gaming at school has even caused policy changes. As of Jan. 9, 2019, Dr. Ann Bonitatibus and the Human Relations Committee endorsed a gaming policy that allows for the use of school projectors and TVs for games during lunchtime.

This was a reversal from last year, during which some students regularly brought their own projectors from home to play games after administration denied permission to use school equipment for that purpose.

“Last year in the spring, a group of students asked if they were able to game in one of the commons areas during lunch,” Bonitatibus said. “We tried to limit it to every other week, because I felt that using FCPS resources may not necessarily be appropriate. I just wanted to see how that went.”

The students’ ability to self-monitor and keep their gaming content school-appropriate won over Bonitatibus’s trust.

“When SGA asked about it this year, I said, ‘Well last year, nobody brought any complaints to my attention.’ I want to be able to trust students as long as [they] are able to do things that are school appropriate and respecting the space,” Bonitatibus said. “If [lunchtime gaming] is something that helps students relax, then I can support that.”

The ability to play video games at school is also based on the formatting of the games themselves.

“[Gaming]’s something that you can do really quickly and conveniently,” senior Ellen Chen said. “The games last a really short amount of time [so] each round is probably [a] maximum [of] two and a half minutes. If you do well, they can be a short as 30 seconds.”

Why Game
This ability to provide quick entertainment is one factor boosting the popularity of gaming, but the motivations behind it are really as varied as the games themselves. For junior Nathan Ma, gaming is a chance to escape from reality and chase success.

“You’re in a virtual world where you can do quite a bit,” Ma said. “The accomplishments of the game, even if it’s superficial, just gives you this sense of achievement, and it’s a nice feeling. It’s something you work towards which kind of paid off.”

Others, like Computer Science teacher Nicole Kim, developed a passion for gaming early on almost out of necessity, as a way to de-stress from academic work without relying on others.

“I grew up in Korea so I studied too much — [from] 7am to midnight — then [I would come home and] really want to do something relaxing,” Kim said. “But there were no friend[s], at the time, to meet. Games were the most interesting thing.”
Benefits
Gaming is not always a solitary endeavor, with some multiplayer games facilitating and even encouraging interaction between users. Sophomore Varun Asuri uses such interactions as a way to foster a sense of competition between old friends and new ones he met through the gaming community.

“I’ve had maybe two friends I don’t know personally, but I’ll play online with them. But mainly, I find my friends and have them come over or play games with them [online],” Asuri said. “Most people think that video games [are] anti-social, but there [are] a lot of games that you can collaborate and go against your friends.”

Competitiveness in the virtual sphere necessitates creativity and advanced reasoning when it comes to game strategy. Math teacher Corey Lightner, sponsor of Jefferson’s League of Legends gaming club, finds that concentration and dedication are the keys to being a successful player.

“I think most games [require] a level of intelligence that people who don’t play don’t recognize. There’s a ton of strategy [and] thought that has to go into doing well,” Lightner said. “When you see people that are among the best at a game, it’s more than just, ‘Oh, I play a lot.’ That’s part of it, but it’s also [that] you’ve developed really good discipline and focus to maintain that level of skill all the time.”

Focus and concentration are not the only disciplines enhanced through strategic gaming; Ma advocates that thinking uniquely is also a core element of success in mobile and console matches.

“Some games are similar to chess and they’re like, ‘Okay, he has these kind of moves that he can make, this certain stuff [you] can use. How are you going to combat that? What moves can you make in the future because of that?’ So some require you to think out of the box in that regard,” Ma said. “[And] there is the whole thing about hand-eye coordination, but I’m not going to pretend gaming is a better thing to build your reflexes than actual sports are.”

Like many gamers, Ma recognizes that for all its benefits, the practice has its own limitations.
Drawbacks
“It’s a nice break from everything in life, but I don’t think playing 24 hours past 10 days is healthy either,” Chen said. “If anything, that has a negative impact on my physical health.”

This addictive nature of gaming means the onus is on the players to maintain a degree of balance in their lives and keep themselves from getting hooked.

“You can kind of compare [gaming] to sugar. It’s nice, but too much of it isn’t good,” Asuri said. “If you get way too addicted [and] can’t go without it, then that’s a problem. But if you can have a balance, then it’s definitely nice to always be able to get that adrenaline rush you don’t normally get from other things.”
Evolution
While video games today have become popular as home or portable devices around the world, gaming as we know it actually started in a twentieth-century research lab with the advent of Professor Higinbotham’s Pong-esque Tennis for Two. Since those humble beginnings, gaming has grown into a multi-billion dollar industry that spans numerous platforms from hand-held and web games to those based in virtual reality.

“The first console that I remember having [was] a Turbo Graphics 16 and I would play the Smurfs game. And then I got a Sega Genesis and I would play Sonic the Hedgehog all the time. So that’s when I really started playing a lot more,” Design and Technology teacher Jared Seyler said. “On occasion, I’ll go back and revisit some of the old stuff. And it’s amazing how back then, you thought it was cutting-edge, like Nintendo 64 [was] 3D and everything. And then you go back and play and you’re like, ‘This is kind of terrible compared to what we play now’.”

In addition to design improvements, Lightner has noticed that the economics of gaming has changed.

“Growing up, you just pay $50 for the game and then you play the game. Now, most games operate on a subscription service or a DLC system or a loot system, so it’s less common to just buy a $50 game and have that be the whole experience,” Lightner said. “Even if you do buy a $50 game, there’s often stuff that comes out later you have to pay to download. A lot of games are free to play, and then you pay to buy stuff within the game.”

As the experience improved, attitudes toward gaming and the popular perception of those who engaged in it shifted as well.

“I think it [has] become more accepted [to play video games]. I remember being in high school and playing the Pokemon games on the Game Boy with a friend, but we were kind of hiding. We didn’t really want people to know that we were playing Pokemon video games,” Lightner said. “That doesn’t seem to be so much of a thing anymore. I see kids here talk about [gaming] more than we did in high school.”

While developers are constantly creating new video games, Seyler and his friends still enjoy playing their older games from time to time.

“[My old friends and I are] actually have a gaming party that we’re setting up. We’re going to bring all our old X-Boxes and play Halo and old games” Seyler said.

There are now many modern versions of classic games, so that even people who don’t have old consoles can play similar games to those from years before. In analyzing the comebacks of different series and genres of games, such as Pokemon and Nintendo, Asuri respects the longevity of those games that have continued to advance and adapt to modern technology.

“Personally, it’s always nice to see old games that make new, improved versions because when they first came out, everyone liked them but eventually got bored of them,” Asuri said. “To see them come back with sequels and stuff [is] always interesting.”
Back to the Future
The culture of gaming depends on the adoption and innovation of the modern minds. In fostering such a culture at Jefferson, Kim encourages her students to program their own games as she once did in college.

“I figured out in college that making a game is also very fun and productive,” Kim said. “My major was Multimedia Engineering, Information Engineering/Systems, and Computer Science so basically I made a lot of games using the graphical programs [like] Java, C++, and Visual Studio. Nowadays, my students are making a game in [my] AI class — I really love to see students and different ideas.”

Seyler is a firm believer in the idea that gaming gives players the ability to reflect and improve themselves in aspects beyond the virtual borders.

“I like to reflect on [gaming] from a design standpoint a lot of times to say, ‘what made you frustrated about a game?’ That’s a way to reflect on other things to see like, ‘Oh, yeah, if it’s not intuitive and easy to understand, that could be designed better,’” Seyler said. “It’s my mindset for design and tech. But [in terms of] improvement, the little things make a big difference.”