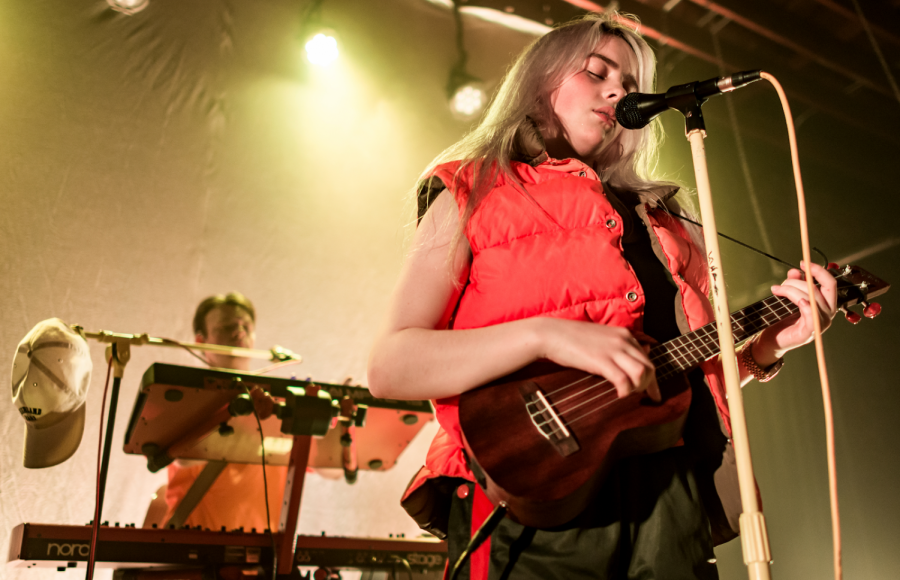 We struggle with depression, anxiety, and insecurities every day. We’re taught that we’re each unique but then raised to follow a crowd. We say nobody is perfect, but everyone around us is pictured with a filter of perfect, a shield stopping our eyes from seeing anything less. After the facade falls away, you see it’s especially the people who can’t be seen as anything less, the people bred to become role models, that break the most. These feelings are hard to put into words, yet Billie Eilish manages to do just that as she captures it all in her lyrics.

In 2017, Billie Eilish O’ Connell was just 15 years old when her first song, “Ocean Eyes”, written by her brother Finneas, was released on SoundCloud. By the next morning, everyone would soon know her name. Always in love with music, she was originally a dancer. Now 17, she uses her eerily melodious voice to co-write songs just as stunningly ominous as her voice. Most may be drawn to her age, but the depth of her music seems to argue it’s not the age that we should see but the person behind it.

“I feel like people judge you on your age when it’s like, I could be any age. Of course, someone older has gone through more than maybe somebody who’s 15. But that doesn’t mean they haven’t felt that pain or that love. You can be any age to feel anything, really. So when someone says, ‘Oh well she’s young she’s never been through anything,’ I’m like, ‘Think again honey, I have,’” Eilish said in an interview with Genius.

Also contributing to Billie Eilish’s individuality is her style. Working on a clothing line, her daily outfit consists of baggy clothing such as sweatshirts, sweatpants, and Bermuda shorts, typically of valued brands such as Gucci and Fendi. Much like how she represents her music, her clothing is undefined. Her silvery tone might have her mistaken as ‘feminine,’ but contrasting with the dark lyrics she is truly unlabeled. As stated by one of her albums, “Don’t Smile at Me,” although a normally smiling person, she hates to smile for pictures. It makes her feel ‘weak and powerless.’ What all these factors have in common are that they make her unique, different, and most importantly, her own person. Being raised by a society where we all blend in, we think this is unacceptable, so naturally, we judge; we try to give ‘being yourself’ a new word: ‘weird.’ Nevertheless, Eilish doesn’t let that change her, taking ‘weird’ as a compliment.

“I  hope to show people that they shouldn’t care what other people think of them. I am really weird and, you know what? I like it, it’s special to me, and it’s fun to be weird. It’s you and it’s your life. Do what you want,” Billie Eilish said to TeenVogue.

While being an inspiration to others, her love of singing comes from performing to her ‘family.’ Unwilling to call them fans as to seem unappreciative, she calls them her family and takes every chance to connect with them, whether it’s through social media or in person. She also takes this chance to remind us she is just like us, a normal, imperfect teenager.

Not only a vision to all ages from middle schoolers to adults alike, shaping feelings into songs, she also shares her pride of achieving this as a girl.

“I feel like the reason I always get so excited and happy whenever I get the crowd to literally be jumping — like, their heads are all the same height every time they jump, so basically it means they’re all jumping — every time I do that I just feel grateful, because I’m a girl,” Billie Eilish said in an interview with  Teen Vogue. “I’m a girl on a stage and I’m getting a bunch of people in a crowd to jump and have fun, and that’s so rare to me. I think now there are a lot of girls doing that sort of thing, but I grew up never seeing any girls do that, and when I’d see concerts it’s all dudes, it’s all rappers, and they take their shirts off and they jump into the pit.”

Billie Eilish has a voice she isn’t afraid to use. With captivating songs filled with raw emotion, she’s weird, powerful, harmonic, twisted, and amazing. You can’t define her with just one word because she’s so much more. She’s an inspiration teaching us that we’re not all the same person, not pieces made to fit the same puzzle, but are instead, both simply and complexly ourselves.