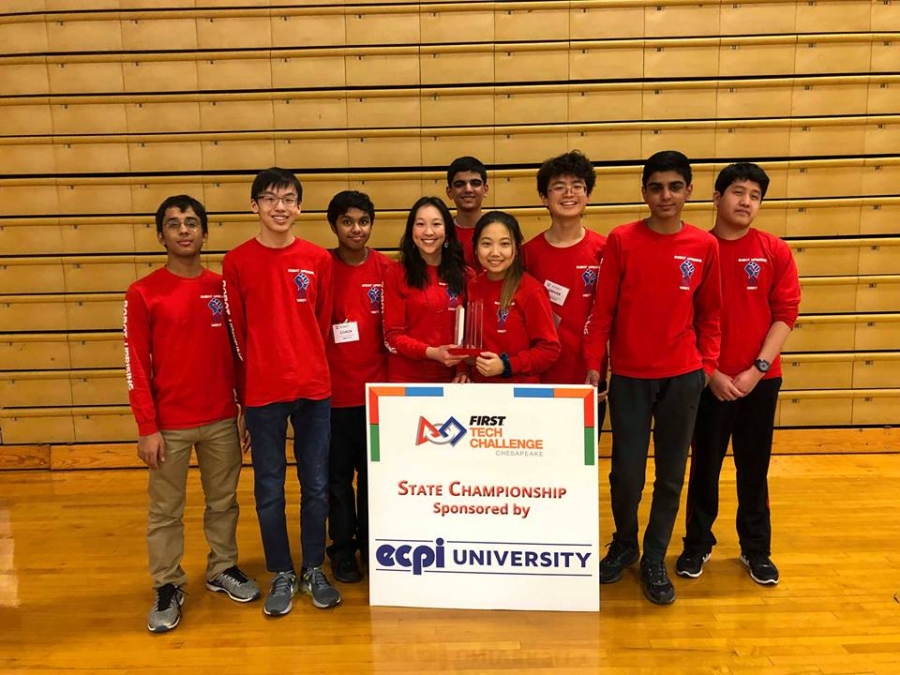 Jefferson's FTC team wins states tournaments on Saturday, Feb. 2 and will continue on to worlds.

Jefferson’s FTC team competed in the States tournament on Feb. 2 and double qualified for the World Championships. After competing with 56 other teams from the Chesapeake Area and winning first for the Connect award and second for the Design award, the team will be heading off to Detroit in April. FTC, or FIRST Tech Challenge, is a competition in which students design, build, and operate robots to complete specific tasks. The teams also present their robot to a panel of judges for evaluation.

While other teams created their robots using a pre-prepared kit, Jefferson’s FTC team built one using an original design.

“We started by brainstorming various ideas for each major part of the robot, then we split up into sub-teams, that worked on completing one part of the robot,” sophomore Jacob Consalvi said. “Then we integrated all of the components to form a working robot. We also documented all of progress in the engineering notebook.”

The FTC team competed at a regional tournament a few months ago, where they led an alliance with other teams. Along with their alliance winning the competition, the team was also given the second place Inspire award. This award is given based off of the quality of the engineering notebook they had to create during the building process. To prepare for the states competition, they had to make some modifications to the functionality of their robot from their previous tournament at regionals.

“We prepared for states by analyzing and fixing most mechanical aspects of our robot that broke. We also focused on efficiency, aesthetics, and driver practice,” sophomore Dev Patel said.

Furthermore, the team made several more major changes to their robot.

“Basically, we rebuilt most of major systems, so that they would be more rugged and reliable. We also improved our autonomous so that it can score above the maximum amount of points,” Consalvi said.

Beyond the necessary mechanical adjustments, the team also developed contingency plans from their experiences at the regional tournament, as some of their robot parts broke down in the middle of the competition. Learning from this, sophomore Jason Wang worked on making extra robot parts for their states competition.

“To prepare for states, we [had] been analyzing what mechanisms could have done better at the past tournament, and applying these changes to our robot,” Wang said. “I prepared more backup parts in case of emergencies and held collaborative brainstorming sessions.”

Apart from programming the robot, the team gave oral presentations to judges. Every competition, whether at the regional, state, or national level, consists of an exhibition portion in which students showcase their robot to judges and other teams. They also have a competition period where competitors drive their robot to complete assigned tasks.

“All of us practiced as a team to make sure we had a good flow and covered everything we wanted to in the time given,” sophomore Reevu Adakroy said.

Each of the teams at the tournament host their own booth, where they exhibit their robot to other contestants and judges.

“I usually stay at my team’s booth in case there are any judges that walk by, and I answer any of their questions,” junior Sophia Cheng said.

As part of the competition, students operate their robots through an obstacle course to earn points. Each team member has an assigned role so that every aspect of the competition is accounted for. Sophomore Charlie Wu, the team leader, maintains coordination within the team and also drives the robot during matches with Consalvi. The two collaborate on operations of the robot in order to score points.

“I had to make sure that our autonomous program for the robot was reliable and could score the maximum amount of points, and work with the other drivers to attain good amounts of practice driving the robot during the teleoperated period,” Wu said.

Many members of the team serve as scouters and interact with other teams. Often times, they learn tips from other teams that they can use to improve their own robots in future competitions.

“At competitions, my job is to scout the other teams. I observe each game and identify the good teams and innovative mechanisms that we may learn from,” Wang said. “Outside of competitions, my primary job is creating CAD and 3D printing the CAD models. Right before the competition, I also worked to create our ‘toolbox’ with all the materials and tools that we may need to fine tune the robot at the tournament.”

Once at the states tournaments, the team was more prepared than ever from their experience at regionals.

“States occurs two months after the last regionals, and teams prepare and evolve their robots, outreach, and documentation to increase their competitiveness,” junior Kathy Li said.

At states, the FTC team became the captain of an alliance they made with two other FTC teams from Alexandria and Centreville. Their alliance became finalists and the team will advance on to worlds. Members of the team looked forward to showcasing their talents on a larger stage.

“I’m confident in our team’s abilities and am looking forward to all the fun we’re going to have,” Wang said.