Beyond Classrooms and Countries 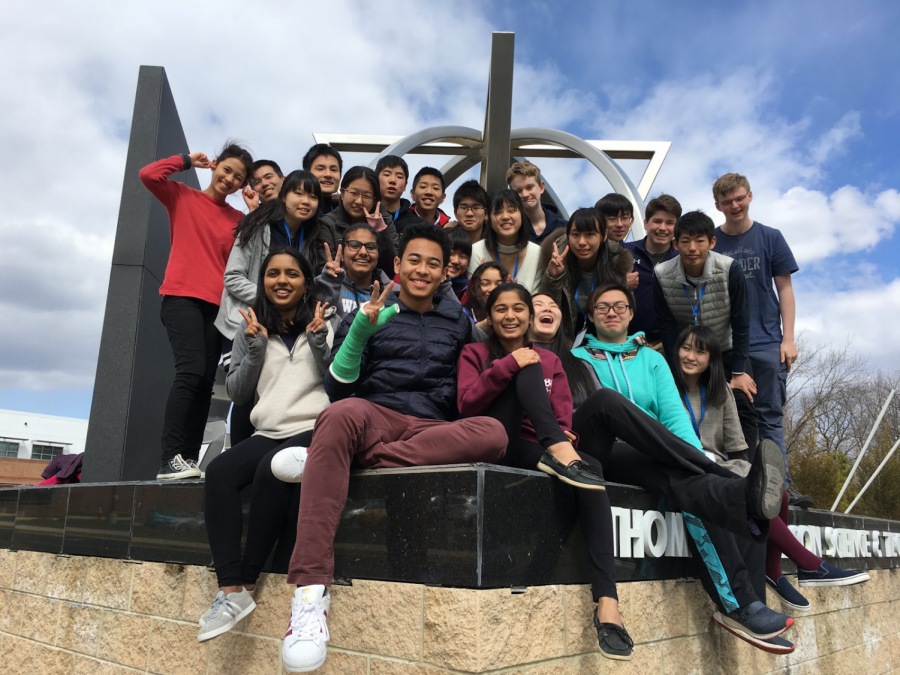 Jefferson’s international relationships with its sister high schools are one of the hallmarks of its world languages program. Every year, groups of exchange students come to Jefferson to interact with students taking their country’s respective language and to experience life in a Jefferson student’s shoes.

One of such relationships is a partnership with Japan’s equivalent of Jefferson, Super Science High Schools. Selected by the Japanese government, Super Science High Schools train their students in a difficult STEM program including mandatory senior research projects and/or research clubs. With government funding, often these high schools have lavish labs with state-of-the-art technology. Every year, a selection of students from these schools come to Jefferson to present their research akin to the JUMP Lab or senior research projects. These research projects encompass a variety of topics such as testing the hardiness of tardigrades and evaluating gold percentages in black ore.

“I think that TJ can learn a lot with maintaining a close relationship with other advanced science schools abroad,” senior Vivian Nguyen said. “We are able to exchange ideas about problems and research projects that we could not find by ourselves. I also believe that our underclassmen benefit greatly from the other science schools. They can be inspired by the other students’ projects and gain ideas about what to research their senior year.”

In stark contrast to the science-heavy Super Science High Schools, Chiben Gakuen, Jefferson’s other sister school, is more focused on a general academic curriculum. Chiben, a secondary school, only offers STEM classes up to the highest level in Japan— first-year college calculus and the usual standards of biology, chemistry, and physics— with no electives. All students from every year take the same classes. Unlike Super Science High Schools and Jefferson, Chiben Gakuen students do not have research labs nor mandatory research projects. For some students interested in STEM, the school environment is restrictive. A few students go out of their way to compete in national competitions or do research with professors. More often than not, they self-study the material.

“We learn standards of Excel and Word as first-years and third-years, but we can study computer science only at college, and almost all students are not interested in it,” fifth-year Shintarou “Shin” Gotsui from Chiben Gakuen said. “I study computer science by myself [in my free time]. We can’t use laptops and phones at school. Maybe [these restrictions] hinder [our] Japanese students from studying [computer science].”

Despite the lack of STEM courses, its academic rigor is on par with Jefferson. On average, students spend two to three hours per day studying for classes, which increases as they near their senior year and start buckling down on college. Similarly, students normally sleep seven hours a day, the hours decreasing as college exams approach. Like students in Super Science High Schools and in Jefferson, many of the students from Chiben continue to enroll in high-ranking universities for college. Like Jefferson students, Chiben students have more liberties in academics for college.

“Chiben puts a great emphasis on studying for college, and students want to study in a better environment, meaning that they want to study at a good college,” Gotsui said.

Obviously, school life doesn’t rotate around college. To make up for the lack of electives, Chiben students pursue their interests in afterschool clubs. These clubs, ranging from athletic to cultural, are the center of many school events such as the yearly cultural festival and athletic games. At Chiben, a sizeable amount of students come for the sports— especially baseball. Annually, Chiben Gakuen’s baseball team qualifies for the regional and national high school baseball tournament. When the team plays at regionals or nationals, nearly the entire school comes to cheer them on.

Jefferson’s sister high schools are different in many aspects, some cultural and some unique to the schools themselves. Despite these differences, students and teachers from both sides are eager and pleased at how their schools’ diplomacy has maintained interactions between global thinkers with different cultures.

“It is great that the [TJ-Chiben] program has lasted for over 25 years,” junior Robyn Chang said, “and it really shows that TJ is dedicated to maintaining a healthy relationship with Chiben Gakuen.”