A Blend of New and Old 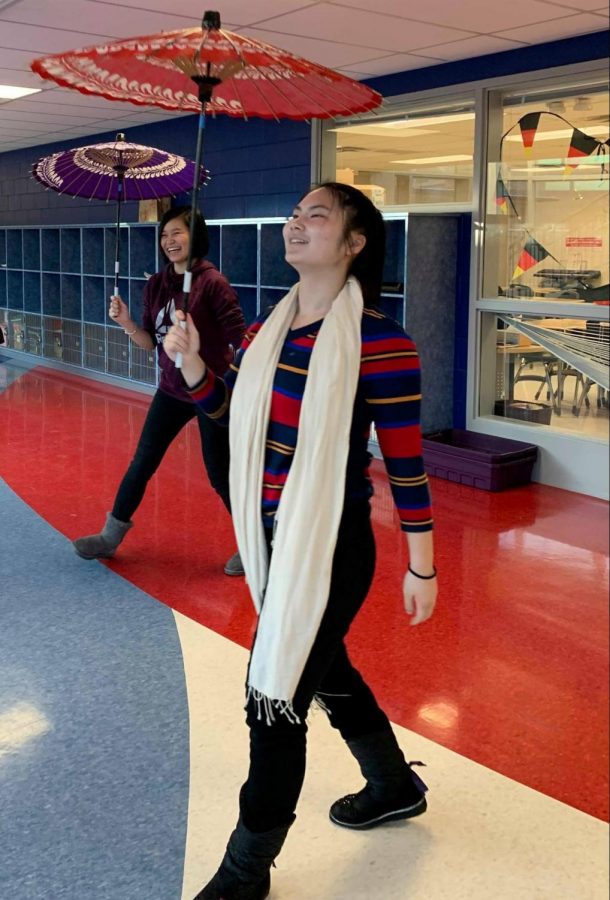 Junior Zhejia Yang, front, and Senior Cynthia Zhang, back, twirl their yosakoi umbrellas while practicing for their onstage performance.

Jefferson iNite, an annual celebration of the dozens of cultures and dance styles that reflect the diversity of the school itself, is taking place Feb. 10 this year. Clubs like Poi showcase an ancient New Zealand tribe tradition, while Namaste combines a variety of Indian dances like Bollywood and Telugu. However, one club is introducing an age-old routine to their act, combining ancient history with a new program.

“Yosakoi is a dance unique to one part of Japan,” senior Vivian Nguyen said. “It actually involves multiple parts. The first section is an umbrella dance while the second is a more active dance with clapping instruments instead.”

Japanese National Honor Society is the eighth period club responsible for putting together this act for iNite. Their sponsor, Otani Koji, is the Japanese language instructor at Jefferson.

“[The umbrella dance] always adds an extra cultural aspect to [the program]. Using these umbrellas is a part of another Japanese traditional dance; in fact, these umbrellas are actually made for the dance.” Otani said. “There are several different kinds of umbrella dances in Japan, and the yosakoi dance actually adopted umbrellas into its style. It was taken from Northern Japan.”

This year’s program will also include soran bushi and taiko, which students from past years have performed as well. Soran bushi is a traditional dance from Hokkaido, a northern Japanese island and embodies the actions and spirit of fishermen from the area. Taiko drums are traditional Japanese instruments that JNHS members have used to create beautiful rhythms for years.

“We started doing soran bushi two years ago because it was a dance that everyone could join in on,” Nguyen said. “It’s large and grandeur, which is something that people don’t expect from Japanese dance. Last year we decided to change things up a bit with a modern twist,  but this year we decided to go more traditional.”

When asked about the motivation behind including yosakoi as opposed to another Japanese dance, Ngyuen recalls the first time she saw JNHS perform at iNite.

“The JNHS act four years ago was yosakoi, and I watched that back in my freshman year. I loved it and decided that this year we should include it to truly connect my four years here.” Ngyuen said.

The final program includes the yosakoi umbrella dance, the soran bushi dance, and the taiko drums. Performers practice as often as they can, spending their lunch, eighth period, and even time after school to perfect their acts.

“We have a very short window to work with,” Otani said. “They are working really hard and I can’t wait to see them dance on stage.”